We found 2 Reddit comments about Le Creuset LS2532-3267 Signature Enameled Cast-Iron Round Round Braiser, 5-Quart, Cerise,Cherry. Here are the top ones, ranked by their Reddit score. 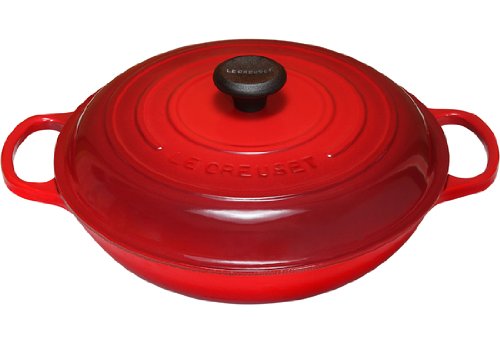 45% larger handles that provide a sure grip, even with oven mittsThe superior heat distribution and retention of le creuset enameled cast ironAn advanced sand-colored interior enamel with even more resistance to wearA larger composite knob that withstands temperatures up to 500ºFColorful, long-lasting exterior enamel that resists chipping and cracking
Check price on Amazon

I grew up cooking on my great-grandmother's old cast iron skillets. I've got a collection of the stuff that would make most here jealous... and most of it sits unused these days.

If you're looking for an alternative that will last... I'm a big fan of Le Creuset or Le Creuset-style enameled cast iron stuff. It's still cast iron underneath... so it has all of the same heat retention abilities as cast iron. Significantly easier to clean, sticks less, and you can be lazy with it (ie leave it in the sink).

My SO is a chef, and I cook a lot. It's basically all we use anymore. I have a couple of hand-me-downs/garage sale finds that are older than I am. Still pristine (with some TLC). The rest I purchased at a LC outlet store (generally 40-60% off for factory firsts in discontinued colors). So long as you don't abuse it, there's no reason they can't last a lifetime. Sure, the enamel can chip if you slam it into things or drop it... but so too can cast iron crack. The ones I've seen with chips weren't on the cooking surface anyways.

For a specific recommendation... the Round Braiser (I think I paid around $150 for mine at the outlet) is not only my favorite LC, but probably my favorite thing in my kitchen. It's insanely versatile... deep enough for stews and curries, shallow enough for frying a steak or making scrambled eggs. We cook almost all of our meals at home... and it gets used probably 90% of the time. I think it's going on 6 years. I leave it dirty or full of liquid in the sink, use metal utensils on it, etc... enamel is still completely in-tact, no signs of wear, other than some surface stains. 5 minutes and some Barkeeper's Friend and you can put it back on the store shelf.

The biggest negative I hear in regards to Le Creuset is regarding the price. Sure, it's expensive if you pay MSRP, but this isn't the place to be if you're worried about that. Plus there are off-brand alternatives that are the same thing and, from what I hear, just as high of quality. To me, it's money well spent. It's not going anywhere... and it's easily paid off the cost difference over cast iron in convenience.

On that note... I think cast iron is a little overrated here. Yes, I get that it's "lifechanging" when you switch to it after years of cooking on crappy non-sticks or whatever. It holds heat well, it's near indestructable, inexpensive, etc... but it's not the ideal solution for everyone and everything. It takes a lot of care to maintain it properly (and half of the people here give awful, terribly unsanitary advice on that). Hell, I'd go as far as to say carbon steel pans are the far better choice for most (cheaper, lighter, better surface finish, easier to clean, less brittle), but they seem to get almost no attention here. It's what almost every professional chef I know uses at home.

I have (or have had) an outrageous amount of cookware over the last 25 years (All Clad, Le Creuset, KitchenAid, Farberware, Cuisinart, Calphalon, Williams-Sonoma store brand, etc.).

I have a teenage about to move to her own place. We have THIS conversation all the time.

A set is a waste of money and space, and for under $200 it will not perform very well, or for very long. Good pots/pans go a very very long way toward compensating for poor stoves, and even for poor cooking technique/attentiveness.

I would buy a small number of items.

If my house burned down, the very first item I would buy is a Liddle Griddle ($25-ish on Amazon). It lives on my kitchen counter, and is an absolute workhorse.

Second would be a stainless pot big enough for soup. This one does not have to be rock-star quality if it will primarily have stock/water/liquid in it. (Could also be a 3.5 to 5 qt dutch oven, not one with shallow sides.)

Third would be the largest size of this Le Creuset brasier, even if it takes a year or more to save up for it. It lives on our cooktop and is used daily. Unless you are cooking for only one person, the biggest is the most functional as you can brown things w/o crowding the pan.

After that, a Le Creuset dutch oven, maybe 3.5 qt, depending on how many you cook for.

We also heavily use a small soup pot (1.5-ish qt), and a large hard-anodized non-stick (not teflon) pan.

If you live near an outlet mall, the Le Creuset outlet often has fantastic prices.

Last summer I had to work in a small apartment (serving as an office) with two people, neither of whom could cook for shit, and the primary occupant had NO cookware. That is what he bought and we used it to cook breakfast and lunch for 3 to 5 people 5 days a week and didn't feel a lack of any capabilities. The minimalist approach to pots/pans and tools also made transferring cooking skills/knowledge much easier (fewer decisions to make).