Reddit reviews Machine of Death: A collection of stories about people who know how they will die

We found 26 Reddit comments about Machine of Death: A collection of stories about people who know how they will die. Here are the top ones, ranked by their Reddit score. 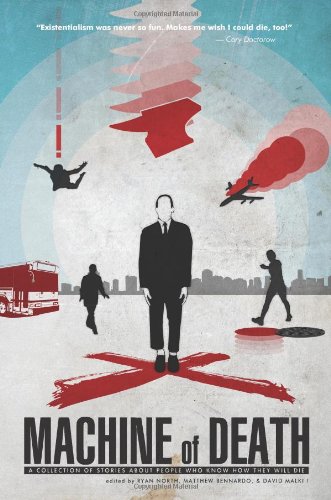 26 Reddit comments about Machine of Death: A collection of stories about people who know how they will die:

This is from a short video that is based on a collection of short stories.

The title of every chapter is the cause of death (ex: Suicide, Almond, Starvation, Friendly Fire, Nothing, Killed by Daniel) and they're always accompanied with a little illustration.

This is one chapter, in its entirety.

EDIT: Whoops, BadgerCourtJudge beat me to it.

Full video is here.
The books are Machine of Death and This is How You Die

Unless it's some sort of silly loophole to it. For example, get "in your sleep", go skydiving, but then you get hit by the wing on your way out, go unconscious, and then hit the ground w/o a parachute while asleep.

There's actually a really nifty book about it that I'd recommend

Though it's not strictly about time travel, I loved reading Machine of Death.

Can't wait for Volume 2 to come out!

Not really fantasy, but the Machine of Death book is really excellent.

Based on the collaborative novel 'Machine of Death'

Don't let this spoil the read though, amazing book and I completely recommend it! Starting from the premise that we have a Machine that tells you when you will die, different authors submitted short stories about it. This collaborative novel has the selected best.

You're doing this wrong. If you approach books as a task for self-edification that you view as a duty, you're going to hate it. Read whatever you want, for entertainment. Read funnystuff. Read thrillers. Read fantasy. Read weird science fiction. Heck, read history, economics, and science.

TL;DR: Read whatever the hell you feel like, and I guarantee you you will feel better about yourself than you would have by forcing yourself through Ulysses or War and Peace.

this thread seems like a good place to namedrop this book:

Welcome, welcome! If I can rec two books:

They're sci-fi and really, REALLY enjoyable. Or at least I found them to be! (:

Machine of Death: A collection of stories about people who know how they will die by Ryan North and others.

Here’s the Amazon link. As the title says, it’s all short stories from different authors about people knowing how they will die, but not the when or the circumstances surrounding it. Some are funny, many are twisty. You can read it in bits.

A quote: “The problem with the machine is that nobody really knew how it worked, which wouldn't actually have been that much of a problem if the machine worked as well as we wished it would. But the machine was frustratingly vague in its predictions: dark, and seemingly delighting in the ambiguities of language. "OLD AGE," it had already turned out, could mean either dying of natural causes, or being shot by a bedridden man in a botched home invasion.”

But yeah, it’s not for giving to everyone, “Hey, here’s this entertaining book about death.”

Heat-death of the universe.


(One of my favourite chapter titles from This)

Also need "Best of" so that we can re-hash new ideas on old prompts. We can have recurring competitions like the Machine of Death prompt. [edited link]

I got this book of short stories for my kindle. Similar vain to your question, and I think you'd enjoy it.

There's a compilation of short stories that run along a similar technology:

MACHINE OF DEATH, perhaps? Or the next, similar one THIS IS HOW YOU DIE, maybe?

I'm reading Machine of Death right now and I'm really enjoying it. I'd say I'm about 1/3 of the way through it.

If you spend time in the webcomics part of the internet you probably heard of Machine of Death when it was published a couple years back. If you don't, you probably never heard of it, unless you heard Glenn Beck complaining that this book kept one of his books from debuting at #1.


The book is a collection of short stories that were inspired by a Dinosaur Comics webcomic that fans wanted the author to make happen. Notable figures from across the internet, as well as some random authors, each wrote a short story based only on that comic (essentially, that a machine somehow existed that would tell you in very few words how you would die, but not when or where). Every story is accompanied by a single amazing illustration from a different artist.

What is so cool about the book is that every author worked from the same original but with no communication, so you get these amazingly unique interpretations. Many are sad, but some are happy and a few are laugh out loud funny. I read it during a cross country trip and absolutely lost myself in it for the better part of the trip.


(On a side note, a few people are recommending Chuck Pahalniuk. His style will engross you, hold you tight, and then hold your head underwater until you can't breath. He regularly has people pass out at the line "corn and peanuts" when he reads a particular short story to groups. If you pick one of his books, go with one where the characters do a lot of the story telling, it adds so many layers of depth and gives you some needed diversity in prose. Rant or Haunted I would say are hands down his best books, despite the fact that Fightclub and Choke were made into movies.)

I have a book for you

You might know this already, but there is a really cool short-story collection and a sequel that deal with this topic.

Annnnd here we go again. I'm doing this with all books, just because.

Hitchhiker's Guide to the Galaxy

Julie of the Wolves

Little House on the Prairie

Voyage of the Dawn Treader

Zen and the Art of Knitting