We found 10 Reddit comments about Minoura Saddle Water Bottle Cage Mount, Single Cage. Here are the top ones, ranked by their Reddit score. 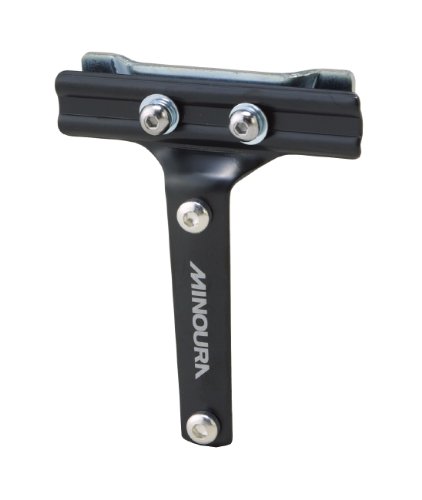 The Cage itself is just a Topeak adjustable one. with a Minoura saddle mount. On the first time out the cage rattled a bit and the bottle fell out when i hit a particularly nasty road transition. but after i stoped and adjusted it a bit tighter I had no other problems with it.

i did get it to work - with the bottle low enough that i could still get behind the saddle on descents (xc bike, no dropper, high saddle). however there were several problems: by itself, it's too floppy for off-road use, so you need to use zip ties to fix the bottom of the T to the saddle tube; on rough ground the bottle bounced out of the bottle cage (same cage that works perfectly on the downtube - seems that the position makes it worse) so i had to add a velcro strap; the bottle can only be small (if it's large you can't slide back on the seat); fully attached with the zip-ties it made adjusting the saddle difficult; you can't carry tools in the same place; in winter i can get away with a single bottle on the downtube for many rides, while in summer i need more than two bottles.

so in the end i stopped using it. now i have tools / tube under the seat and either a single water bottle on the frame or bottle + backpack.

Hell yeah thanks for the pointer! I'm comparing the X-Lab combo to a cage mount and cage. I think the separate cage+mount will be 1/3lb total instead of 1/2lb so leaning that way right now

i use one of these

it also comes in a 2 bottle holding version. it works great and it's cheap.

I have a Minoura seat mount.. it works good, cheap at $7 (no cage), its just heavy

I also have a xlab delta that works ok too, more of a pita to mount.

i don't really like seat mounted because I prefer to have my bag there.

I found a cheap mount on amazon.. I cant remember the brand name.. Something like Minour maybe. It was like 6 bucks and was the only single bottle mount i could find.

I think I got this mount off of amazon, and then just used a regular cage.

Any body tried these kind of universal/generic cageless mounts?