We found 6 Reddit comments about Mixed Martial Arts: The Book of Knowledge. Here are the top ones, ranked by their Reddit score. 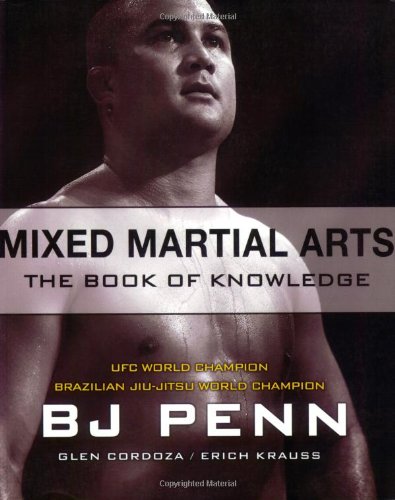 6 Reddit comments about Mixed Martial Arts: The Book of Knowledge:

I should update this at some point but anyway:

Here's an Abridged version of my book recommendation list.


Firstly, for Greco, I'd have to suggest Martell's Greco-Roman Wrestling

However, Martell is more suited for those who have a folkstyle background. For those who don't (and even those who do) I would recommend Randy Couture's The Natural Way as it builds up from wrestling basics into freestyle and, following that, into Greco.

For an interesting look at the transitional period between Catch and American Folkstyle I would recommend Leonard's A Handbook of Wrestling that can be found free here especially for those with a self-defense interest as it includes techniques now illegal in American Folkstyle while still teaching the positionally dominant wrestling basics. Some techniques are more a product of the times though.

For boxing I have to recommend two books, though they are more or less one book. Haislet's Boxing is one of the most comprehensive guides to the various aspects of Queensbury boxing without having a specific bias toward any one style. The U.S. Navy's boxing uses the text from Haislet in it's technical segments, but is more structured around teaching a large class, complete with lesson plans and coaching tips.

For specific ground-fighting tactics and techniques, Jackson's The Ground Game is probably the best overview of that phase, complete with both striking and submissions and used by the best in the world.

For a self-defense focus, I would suggest two boxing-related texts. The first is The art of Infighting by turn of the century era boxer Frank Klaus. The second is Banned from Boxing which is an academic and technical work on the use of grappling in Bareknuckle-era boxing, complete with hair pulling and even standing chokes. Both of these present great options for dealing with physicality in limited space and applying "dirty boxing."

Finally, for a very specific recommendation, B.J. Penn's MMA Book of Knowledge as it has a comprehensive guide to fighting against the cage, which also applies to fighting against walls and other barriers one might encounter in life. There are relatively few texts that do this in-depth, so if one is interested this is the book to get.

Also, Wikitenauer has been mentioned already, but I specifically recommend Auerswald's Treatise on Wrestling. Blades really aren't my field, but The Fellowship of Lichtenauer is my go-to source for dagger and short-blade fighting at least.


I've posted this a couple of times, but I can say that there are a number of quality pieces by fighters. However, despite many of them containing basic techniques, they are far more valuable to someone already proficient trying to pick up new tricks or strategic information than to the novice.

Wow I own most of those books as well! You have excellent taste in literature sir. The most comprehensive book I have ever read that deals with MMA strategy in particular is Mixed Martial Arts: The Book of Knowledge by BJ Penn, Glen Cordoza, and Erich Krauss. It basically breaks down and analyzes BJ's game into simple and easy to understand sequences. I highly recommend it.

I found this helpful, although I am only a beginner so not sure what level you are at.

I have read more of the posts in your thread and they are spot on.

It wasn't until I started rolling that I began to appreciate and understand the positions at all; I would highly suggest giving it a go if you really are into the sport, but if that is completely out of the question for whatever reason there are a number of things you can do:

I think the best thing for you is BJ Penn's MMA book of knowledge. Wikipedia, Youtube and BJJ training sites are really great and you can learn what a Kimura is and how it can be applied in side control or from the guard, but the above are kind of tough for understanding how it all fits together.

BJ's book is nice and structured and gives a run down of all positions and a ton of technique stuff, if you read through that you will be able to start watching the Gracie Breakdown stuff (which may be slightly too complicated without a basic knowledge) and digesting that knowledge; within a few weeks you will be able to watch a fight and start thinking like a fighter: "he is the arm isolated for an arm triangle but needs to cross over the body to make it tight", that sort of thing, rather than just knowing the names, which is far more interesting and valuable in my book.

this book is pretty neat. I've had it for 5-6 years now and still occasionally flip through it. it has picture play by plays and explains what your trying to achieve in various positions. covers stand up as well. Its around 300 pages so it doesn't get to complicated but sounds like what your looking for.