We found 16 Reddit comments about Motherlove Nipple Cream (1 oz.) Organic Lanolin-Free Herbal Salve for Soothing Sore Nursing Nipples – Unscented Ointment, No Need to Wash Off Prior to Breastfeeding, Great as a Pump Lubricant. Here are the top ones, ranked by their Reddit score. 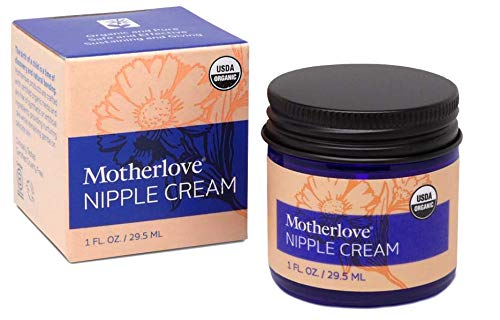 LANOLIN-FREE & PLANT-BASED: Our Nipple Cream is unscented, free of lanolin, and does not need to be removed prior to nursing. A rich oil infusion of marshmallow and calendula, thickened with beeswax and shea butter, helps to soothe the discomfort of chapped, sore nursing nipples.MULTI-USE FORMULA: Not just for nips, Nipple Cream is great to use as a pump lubricant and for chapped lips, dry skin, and more.AWARD-WINNING: This nipple ointment is trusted and loved worldwide by generations of families and lactation consultants. Nipple Cream is the proud winner of The Bump award for Best of Baby and was a finalist in the What to Expect awards.100% ORGANIC & CRUELTY-FREE: USDA Certified Organic and Certified Cruelty Free by Leaping BunnyMOTHERLOVE CARES: As a women-owned, family-run, Certified B Corp, Motherlove cares about people and planet over profit. This product was produced in a solar-powered, zero-waste facility by employees who receive competitive pay and full benefits.
Check price on Amazon

I don’t know if it’s available in the UK but I used mother’s love nipplecream.

When I got the chance I did some searching and found some experts showing how it's done. Same technique applies for adults (of course your mouth is a bit larger so you'll probably end up taking more in, but it all works out).

Aim the boobie for the roof of the mouth, when your mouth takes in the boobie it'll slide down to where it's almost gagging you.

You'll make like a seal and it'll just stay where it's supposed to be. You use your tongue to massage the teat (Don't know how else to describe it, but once you play around you'll figure it out, and breathe through your nose.

As the suckler it was a bit weird and until I learned to relax my jaw got a little tired trying to do more work than necessary.

Your nipples being a little sensitive afterwards sounds normal. I know nursing mothers sometimes get cracking, but there are fixes for that

Mother's Love worked great for me. It can also double as diaper cream.

I really, really liked Motherlove. It's herbal, and super smooth and soft. I couldn't stand trying to mash the hard Lansinoh onto my already sore nipples. One note of warning though, it's mostly oils so will stain clothes/bras if you don't have anything protecting them.


Bottles. I've had a lot of friends that love the playtex drop-ins

If you're going to breastfeed pick some pads for yourself along with some nipple cream. I liked motherlove.

Swing, rock n play or bouncer so that you have a place to set baby down to accomplish dishes/shower.


That's all I can think of off the top of my head.

Amazon has a checklist feature that really helped me build my registry as a FTM. There's also a "Good, Better, Best" checklist that has honest, unbiased reviews of products in each category to highlight the "covers all of the bases, minimal bells and whistles, low cost" to the "all of the crazy shit you will never need but costs a million dollars!"

Here are a couple of things that I selected based on those lists and reviews here:

Washable organic nipple pads... to answer your question they absorb leaking milk so your shirts don't look like they're crying all the time. disposables exist, too, but I figure why spend more money throwing them away when you can just toss them in the wash. This pack had enough pairs that it's not like you'll run out in between laundry loads, especially with baby making messes!

I love this list, I kept thinking "ditto!" with almost everything you wrote! Because I can't help myself, here is some of my feedback on some of those products:

For boob cream- I loooove the Motherlove Nipple Cream. The Earth Mama Angel Baby one was really grainy to me, and I'm not a big fan of the cocoa butter smell (to each their own!). The Motherlove cream saved my nipples those first few weeks and I still use it after a long pumping session.

Leak management- gurl I feel you on being leaky! I am SO leaky. I love the nighttime Bamboobies, they're the only ones that work for me (and I have to switch them out three times a day). The downside is they're pretty obvious through clothing, so when I have to go out of the house I'll pop a disposable lansinoh one in there instead. But Bamboobies all the way!

Leak Collection!- Yes! The Milkies Milksaver I have has been great at catching the ~1oz I leak from the non-nursing side. Now that Miss V and I have more of a breastfeeding pattern that involves her only eating from one side per session I'm going to try out a Haakaa Silicone Pump to see if the suction will draw out even more ounces from the neglected boob.

Nursing Bras- They're expensive but I'm a total Bravado fanatic. I'm a big girl and they carry a wide variety of sizes, even for the much bigger bust sizes. And they recently released this hands free pumping attachment that, the few times I've experimented with it, was freaking awesome. I hope it continues to be awesome when I go back to work!

Edit:
Oh! I forgot one of my favorite pumping accessories! The Pumpin' Pals Super Shields have made a difference in my output but are also a thousand times more comfortable that regular flanges. Plus you can recline while pumping without spilling breastmilk everywhere! I was gifted these by a friend at my shower and I was skeptical about them living up to the Amazon reviews hype but I am definitely happy to have them.

This is the kind I use. Bought mine at Target, but here's an Amazon link: https://www.amazon.com/Motherlove-Certified-Organic-Cracked-Nursing/dp/B0007CQ726

MotherLove makes a great nipple cream that doesn't have any lanolin. This site has some really great videos and fact sheets about what breastfeeding looks like and how to handle difficulties. Have some Soothies in the fridge for at first when your nipples HURT. Don't have formula ready to go "just in case" as it will inhibit your ability to trust that you can feed your baby. Trust yourself, your baby, your body. See if there's a La Leche League group near you and start going to meetings before the baby comes. You'll get a chance to see breastfeeding in person if you haven't before, as well as meet lots of moms who can talk you through tough times in person (which is huge). Some moms there might even be willing to show you how their babies latch and what you can expect.

The single best 2 pieces of advice I got: Don't be afraid to get help. Never quit on a bad day.

I hate lanolin/the idea of wool grease, but MotherLove makes a really nice organic and (minus the beeswax) plant-based one of you ever decide you want to try something else. I like it!

My son thought it was hilarious to bite me and get a reaction. I️ would gently press his face into my breast like I️ read about, but that did not help. I️ then just took him off the breast and stopped the session for a few minutes, that seemed to make a better point. I️ used Motherlove nipple salve and it helped but I️ remember one time I️ actually had to avoid nursing on one side for a day (hand pumped when needed, pink milk was interesting). Good luck!

I use this. It’s been great and even though it’s only 1 oz, I still have a lot left after BF for 6 weeks.

i never used one of those baby baths, i always brought her in with me and sat her in my lap.

if youre breastfeeding and want to stick with it, i recommend finding a bottle and nipple you like, (this one is "slow flow" and is the one she liked back when she would take one. slow flow is where its at for breastfeeding, as its closest to the amount of sucking shed do when breastfeeding) and giving her one few days at least til shes closer to a year old. i hardly ever gave mine a bottle and she flat out refused to take one or take a binky til she was 18 ish months old and weaned herself. almost two years and she could never go to a sitter or grandmas house for more than a couple hours max. i liked bottles that took these since you dont have to worry about washing / sterilizing everything.

i never used a crib, she co slept til right around when she weaned herself. one day she just... dragged her blankets to her toddler bed (where she always took naps) and decided she was done co sleeping. was awesome. co sleeping is the best when youre breastfeeding, no getting up and down in the middle of the night, can just roll over, pop a boob in her mouth and doze.

get nipple cream! NIPPLE CREAM! and those handy little nipple shields to go in your bra for when you leak. at about 2 weeks - one month your nipples will be on FIRE. it will suck, but only lasts for about a week after that. its WORTH IT when you dont have to lug around formula and bottles everywhere you go.

get or make a baby wrap / carrier. youll look like a new age hippie, but its more comfortable than any traditional baby carrier, and feels more secure than any of the slings. i made two out of about 10 yards of gauzy cotton fabric, cut longways its about the right width. you can wrap her in front when shes little and breastfeed her without anyone being the wiser, later, you can carry her on your back like a champ without her little legs getting sore from hanging out of one of those "typical" carrier types.

heres a wonderful site that lists all the different wraps by age, this one is my fave. http://www.wrapyourbaby.com/frontwrapcrosscarry.htm

instead of a mobile, get one of those rotating star projectors. theyre move expensive, but will last well into preschool, and double as a nightlight.

I'm a first timer, so I have no experience post-pregnancy, but my nips have been tortured since early on. I got this stuff on Amazon and it is a life saver. It works so well that I only have to use it a couple times a week to keep everything hydrated and happy for several days at a time.

I had a C-section. Here's my list of musts:

Huge drinking cup so you don't have to get up so often: https://www.amazon.com/dp/B01DGMBG5Q/ref=dp_prsubs_3

Burp Cloths (which are useful for a million things, I bought 3 of the 10-packs and am so glad I did):
https://www.amazon.com/gp/product/B007VBYVVA/ref=oh_aui_detailpage_o07_s00?ie=UTF8&amp;amp;psc=1

And my MIL got me this housecoat type thing made of sweatshirt material that was longer than knee length, zipped up, and had 2 massive pockets. I lived in the thing for like a month because I couldn't stand pants after my C-section. Plus it was warm and the pockets were really handy for carrying things (phone, water bottle, burp cloths, etc) while I was holding the baby.

Mom here, this stuff was amazing for the soreness. Also makes a good lip balm too.