We found 12 Reddit comments about My Little Pony: Twilight Sparkle and the Crystal Heart Spell (My Little Pony Chapter Books). Here are the top ones, ranked by their Reddit score. 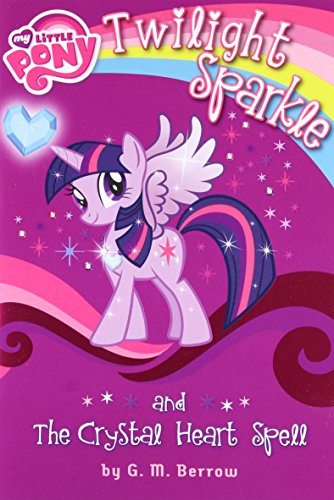 The book is called "Twilight Sparkle and the Crystal Heart Spell." You can see a summary on the wiki or in the reviews on that Amazon page.

The show itself never explains, but according to this book, Cadance was an orphan pegasus found in the forest and raised by an earth pony couple. She defeated an evil unicorn with her love powers and ended up in the same weird other dimension place that Twilight went when she became a princess, so Celestia brought her to Canterlot and adopted her as a niece.

You're an awesome parent for supporting your son's newfound hobby and making sure he can experience it in the cleanest manner possible. Hopefully we'll be able to be of some help.

&gt; how old are most people on pony forums like this one?

The median is around college age, so mostly 21 and around. I'm towards the higher end at 24. Some of the people on this forum lean a little younger, between 16 and 21.

&gt; there is a side of MLP fandom that isn't kid safe at all. Can you tell me: which websites are best avoided

As always, you should be present as much as possible whenever your son decides to browse the internet.

It's gonna be hard to filter, but my first and probably most helpful piece of advice is always to turn Google SafeSearch on for any computer he might use. It'll be on by default, but just make sure the checkbox is checked.

Official places will be your best bet, since your son can see all sorts of cool and curated pony stuff without potentially interacting with anyone dangerous.

Naturally, you can never go wrong with the official website (www.MyLittlePony.com), which has all sorts of fun games, coloring books, pictures, and videos. Since it's the official website, it's heavily curated by Hasbro staff, so you will be guaranteed to never see questionable content.

Netflix is definitely a safe place; every episode from seasons 1 to 4 is on there, as well as both of the movies. You could even make a dedicated "family time" where everyone watches an episode every night! It also has two documentaries, "A Brony Tale" (starring Applejack/Rainbow Dash's voice actress, Andrea Libman) and "Bronies: The Extremely Unexpected Adult Fans of My Little Pony" (starring the creator, the voice of Discord, and the voice of Twilight Sparkle), both of which will do an excellent job of introducing you to the fandom and all the cool stuff the bronies have done.

It will be hard for your son to interact with other My Little Pony fans over the internet, since most internet users are adults and will have fewer filters. I would be cautious allowing him access to sites where other fans congregate.

There are lots of cool videos on YouTube, but some of them might be vulgar or extremely bizarre, and YouTube doesn't do a very good job of hiding that content. I suggest looking up Pony on YouTube with a certain degree of caution... but you will find some really cool stuff there too.

Equestria Daily (http://www.equestriadaily.com) is a great place to find out news regarding the fandom and the show. It does not ever post mature content at all, but its comments sections are frequented by fans. As long as you keep him out of the comments section

Derpibooru (http://www.derpibooru.org) is a site that shares hundreds of thousands of MLP pictures and art made by fans. It has filters that you can set up so that your son never gets exposed to explicit content, including a TV-Y mode. These filters are on by default, so you can peruse it if you want to look at cool pictures with your son. I'd advise against letting him browse alone, however, since they're easy to turn off.

Fimfiction (http://www.fimfiction.net) is a site for fans to write and post fanfiction. It has a mature toggle that hides mature content, but unfortunately it's very easy to turn off. It'll best be browsed with parental supervision, or potentially not at all until your son is a teenager (which means he might not even be a fan of the show anymore by then).

If you want to try and keep your son off the internet...

The official comics are fantastic from both a story and art perspective, and they will keep your son (and you and your husband too!) very entertained.

There are also chapter books that will help your son learn to read. Many are offered at various reading levels, so you can gradually wean your son on bigger and more complex books over time.

There's also an official My Little Pony game for Android, iPhone/iPod/iPad, and Windows Phone, and all sorts of official audiobooks that your son can read along with as well. Since they offer no social features, there's no possible way for your son to interact with anyone dangerous.

Hopefully that's a good enough summary! If I can think of anything else, I'll let you know! Good luck, and have fun ponying-out with your son!

I guess it depends on whether or not you take this book as canon material. It has some backstory on Cadance, explaining that she was previously a pegasus. So, while we still haven't seen an explicit earth pony to alicorn transformation, being a magic-wielding unicorn is apparently not required.

The book also specifically describes alicorns as being a combination of all three pony types.

I bought this book a while back. I didn't like it because of the reasons I posted in my review, but it is a decent sized book and sounds like something you could use.

$2+shipping. Does that sound fair? I'll ship by Canada Post, with or without tracking.


My Little Pony: Twilight Sparkle and the Crystal Heart Spell

[](/dashsmirk "I guess most people can figure out how I know that.")

but that's not the first official book. This is. Though I think the book you linked still talks about Cadence being a pegasus.

Last night was hectic. Due to some unfortunate customer mishaps, we ended up running around like crazy late into the night trying to fix things. Just barely squeaked by. Hopefully it goes better today. On the positive side, my new mouse arrived as well as the first pony mini-novel. Looking forward to reading that.

Decided to start working on my entry for the MLSG project before work. I've never used my tablet on *nix before, but I finally was able to fix the settings so the cursor wasn't flying around everywhere. Drawing ponies is harder than I thought it would be and this may take forever to finish. But I must, for scien... art!

Haven't gotten a chance to read it myself, but if you're a real big fan of Cadance (judging by your username, I assume that you are), it sounds like you need to get ahold of Twilight Sparkle and the Crystal Heart Spell, in which Cadance tells Twilight the story of her foalhood and how she ascended. AFAIK it's the biggest chunk of mostly-canon Cadance background we have.

Equestria to be with the Ponies! Yeah, im cheating but others have said Star Wars and Skyrim so its fair game.