We found 10 Reddit comments about Nerf Modulus Recon MK11 Toy. Here are the top ones, ranked by their Reddit score. 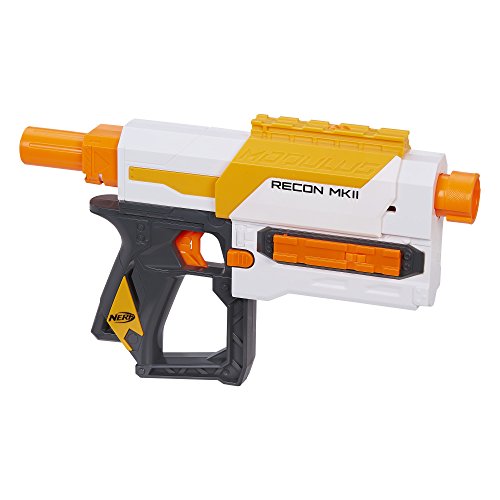 NOTE: This version comes in simple brown packagingN-Strike Elite blasters and Elite darts deliver the ultimate in blaster performanceMega Series blasters feature Mega Whistler Darts that scream through the airDefend against a zombie invasion with ZombieStrike blastersIgnite the night with FireVision sports gear that glows when thrown. Raise your game with the Pro-Grip Football and Nerfoop basketball setIf darts are bent, they should be removed if not they will jam the product.
Check price on Amazon

&gt; Would this be a good first Nerf gun? is it powerful? and is it accurate?

I mean, it hits the standard 60/70 fps, nothing special. It's about as accurate as any other Nerf blaster, which isn't saying much. The 'custom stock' kinda sucks, I recommend you get one of these instead. If you really want to get one, go ahead, but you should really just get the blaster without any Nerf accesories and buy aftermarket accessories.

There are a few other things I should fix about this post, but I won't because I've already just fixed your formatting for free

Get both as both have advantages over the other that balances each other out:

The Mediator is easier and faster to use out of the box IMO since it already has a pump grip already. It's just as easy to upgrade the spring in the Mediator as it is with the Recon Mk2. However, the main con against the Mediator is that it's not left-hander friendly, some people may find the ergonomics a bit off (i.e the short travel of the pump grip isn't to everyone's liking and can throw people off), and the side magwell may be an issue for indoor or heavily cover areas.

The Recon Mk2's chief advantage over the Mediator is that if you wait and monitor this link long enough, you can get the Recon Mk2 for like $5 to $8 easily:
https://www.amazon.com/Nerf-Modulus-Recon-MK11-Toy/dp/B019JI9QGC

You can then use the remaining $10 to $12 that you would spent on the full Recon Mk2 setup on larger 3rd party magazines off NFStrike or eBay and items you need to create a PVC pump grip like the one you see in Beret's video here:
https://youtu.be/F9a93tOFxaI?t=79

IMO, the Recon Mk2 + custom pump grip is more ergonomically friendly than the Mediator. The front barrel and the stock on the normal full Recon Mk2 kit are just plain useless so really not worth spending money on them.

But yeah, get both as variety in blasters is a good thing to have in general. Not one blaster is to everyone's taste. In fact, speaking of variety, in addition to the Recon Mk2 and the Mediator, get the Buzz Bee Air Warriors Interceptor and the Snipe:
http://www.kmart.com/buzz-bee-toys-air-warriors-interceptor/p-004W004505410001P?plpSellerId=Kmart&amp;amp;prdNo=7&amp;amp;blockNo=7&amp;amp;blockType=G7

The Buzz Bee Interceptor already has a very ergonomic pump grip, can take K26 spring for super performance increase, and its out of the box performance is a bit higher than the Recon Mk2 and Mediator. The Inteceptor shoots at an average velocity of 77FPS whereas the both the Recon Mk2 and Mediator shoots at an average velocity of 65FPS. The main con against the Interceptor (they fixed the Magwell issue apparently) is that small grip and short stock. But that can be fixed:
https://imgur.com/gallery/sdePI

Why the Snipe? Because it's a really really fun blaster to play with. The whole bolt action sequence on the Snipe is just utterly fun to play with. Combined with the overall look, it does bring out the inner "I'm a snipah!!" feel. At the end of the day, Nerf isn't just about performance or a massive arms race. It's about fun too and roleplaying or acting your inner sniper is part of that fun. With that said, the Snipe actually has the better out of the box performance since it can shoot at an average velocity of 85FPS. It can also take a K26 spring upgrade as well.

A Recon MkII will provide you with retaliator internals, minus some metal bits that they switched to plastic and the trigger. I'd say this would be the cheapest way including shipping.

/u/Mistr_MADness has the right of it. For under half price you can get the basic blaster.

Unless you're sub 5' tall, the stock that comes with the full price version isn't going to function well as a stock. The worker one he recommended is fantastic, I have the black version.

As for how well that blaster stacks up, it's going to depend on your intention. Are you just plinking around the house? This'll be great at that. Are you planning on going to HvZ or some kind of Nerf war? if so, you're either going to want to invest in some spare magazines or look at a turreted blaster, as those are easy to reload on the run.

The recon has excellent potential for modding though! If you happen to come across an original barrel extension you can convert the pistol into a pump-grip rifle, which makes it far easier to prime after you mod it for maximum power!

Have you considered the Doomlands Double Dealer? I heard it never jams. /s

I'd blame the worn darts, worn magazine, or maybe you are short-stroking the prime.

If you plan on ditching the Retal, you might want to go ahead and try removing the AR to see if that helps with worn dart reliability. Just remember not to dry fire.

As for a replacement and cheap, the Recon MKII core blaster is on Amazon right now for only $8.08 w/ Prime. It is compatible with your current barrel and stock. Might want to snag some koosh darts too if you want to try to see if that is the issue.

Bam! You just snagged yourself a good, modded nerf blaster for $17.