We found 29 Reddit comments about Neuroscience: Exploring the Brain, 3rd Edition. Here are the top ones, ranked by their Reddit score. 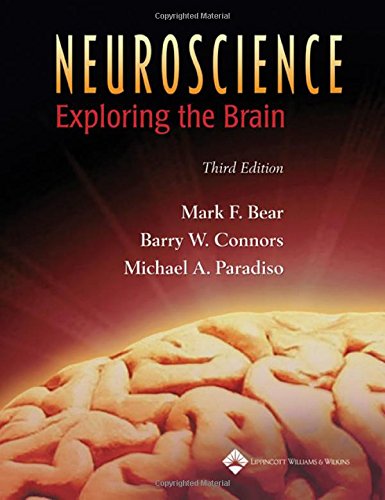 Kandel - Principles of neural science is the best by far, despite being just a little bit outdated on some areas (but so are all other textbooks in this field). Bears Neuroscience: Exploring the brain is a very easy read, goes down like yoghurt, but is far less comprehensive and not so in depth as Principles.

Anything from Oliver Sacks always worth reading imo.

Hi! I think the greatest thing you can do, is to join "Fundamentals of Neuroscience". It's an online course, but it's really nothing like most courses online. The production value is crazy high. It's truly experimental, because its purpose is to allow anyone to understand neuroscience without sandpapering the edges. I recently attended a university level introductory course in neuroscience. Our textbook was Purves'. Several of our instructors are published in Science and Nature. While the course was really great, the "Fundamentals of Neuroscience" delved deeper than the course and presented more nuanced pictures of the information. I can't think of any better introduction. To really learn this stuff, you need to learn a lot more than is presented in the online course, but you're very well off if this is your starting point.

As for textbooks, Purves, as mentioned earlier is good. Principles of Neural Science is mentioned often as its probably the greatest reference work, but it's not something you read as a first timer. Bear is good. I have read some of it, and it seems pretty good as introductory material. Both Purves and Bear are fine.

If you want the standard sequence of Neuroscience textbooks, there is a rough ordering of 3 common books. Each are very comprehensive and more than you would likely be able to read cover to cover, but they get more sophisticated and comprehensive as you go. The last one specifically is essentially the bible of neuroscience and you will be hard pressed to find a more comprehensive coverage of any of the topics outside a specialised textbooks or research papers.

These books will cover the general overview of neuroanatomy, physiology, pharmacology and pathology but if you want to go further in depth, there are more advanced books for each of those and dozens of other subfields.

The top comment is right that the Kandel is a great neuroscience text. I have it myself and it's my go-to. If you're starting out from the bottom and learning on your own I would suggest a more user-friendly text.

Neuroscience: Exploring the Brain is good. I have the 3rd edition, which has probably been updated by now. Looks like the price is very manageable, too.

Each of these books is aimed at a different audience, but this should get you started.

This book is explicitly named as the book I am required to know, cover-to-cover, including all appendices for my candidacy exam. I have been going through it and it gives quite a broad overview of the field, but also has a lot of detail needed for a good overall knowledge of neuroscience. This book, in addition to your specific readings for your area of neuroscience, should give you all you need to do well in your program and your candidacy exam.

I am also doing my PhD in neuroscience, focusing on Prions and neurodegenerative diseases.

If you have any other questions, feel free to PM me and i'll do my best to answer them!

When I made the switch from Computer Science to Neuroscience for my PhD, I started by reading Neuroscience: Exploring the Brain. I found it to be a very effective introduction to all of the fundamentals.

I used this book for years and it was written by my neuro professors. I can't recommend it more highly: http://www.amazon.com/Neuroscience-Exploring-Mark-F-Bear/dp/0781760038 (can get used for a little over $30)

I usually recommend Bear-Connors-Paradiso as a first read, as it is simpler; almost in between a textbook and a popular book. And then you use Candel to go deeper on selected topics (or all).

And indeed, another approach is a "top-down" reading: download some papers from Pubmed, and start deciphering them. Use Wikipedia, and references from there, and reviews from Pubmed, to understand these papers - word by word, sentence by sentence. It's a long process, but extremely helpful. And there's no better way to charm the professor, and make them suspect that you are one of the best, most intelligent and proactive students ever.

Neuroscience: Exploring the Brain was my go-to when learning neuroscience coming from an engineering and physics background. It's pretty accessible for people from many different backgrounds. For example, it covers the requisite biology and chemistry you'll need to understand the basics if you haven't had exposure to those fields yet.

This is how I understand the two most popular out there:

Principles of Neural Science (4th edition) has been the gold standard of neuroscience textbooks. It's been called the "bible" of neuroscience and a great jumping off point for anyone who wants to get a very technical and medical perspective on the various functions of the brain. The fifth edition is set to come out this October so I don't know if you'd want to wait or jump into this one but from what I understand this is the number 1.
http://www.amazon.com/Principles-Neural-Science-Eric-Kandel/dp/0838577016

The other textbook that is popular, that I've read most of, is Neuroscience: Exploring the Brain (3rd edition). This textbook makes a lot of the topics that you'd like to learn about organized and easy to understand. While this book probably doesn't go into as much detail as Kandel's, it is a wonderful jumping off point to learn a lot of the basics about neuroscience and to get a solid understanding of a lot of mechanisms controlled by the brain. I highly suggest this one if you're new to neuroscience and not in medschool.

I'd go with Purves' textbook or Bear's book. Both are very good introductory books. If you want something more difficult, try Principles of Neural Science by Kandel or (even more difficult) Fundamental Neuroscience by Larry Squire.

The Emotional Brain: The Mysterious Underpinnings of Emotional Life is a great introduction to affective neuroscience, if you're curious. Neuroscience: Exploring the Brain is also a good textbook for a general introduction and review of the subject.

I've noticed you've posted a lot of questions to this sub reddit, and most of them go unanswered. You might find it helpful to take a course in neuroscience (like this one https://www.edx.org/course/fundamentals-neuroscience-part-i-harvardx-mcb80-1x#.VPuNwPmUdnY), or perhaps read a neuroscience textbook, like this one http://www.amazon.com/Neuroscience-Exploring-Brain-3rd-Edition/dp/0781760038

Even if you're not a student, it might be worthwhile looking in your local university library. So long as you don't check anything out I doubt they would stop you.

It all depends on what your intent is. Neuroscience is so broad and interdisciplinary that my recommendations depend largely on how much time and effort you plan to put into it. Are you trying to understand the brain so that you can go into research someday? Is neuroscience relevant to your separate field of research, and you just wanna get to know all the acronyms? Or are you just a curious layman who wants to understand the organ of understanding? In the latter two cases, many of the suggestions are very good; books by anyone from Ramachandran to Koch will suffice.

But if headed into neural research, you should really grab an introductory textbook that explains the principles of the brain (I recommend this one) and go through it, chapter by chapter, so you get the fundamentals down before you move onto deeper inquiries. If you have the money to spare, you should also pick up Principles of Neural Science as a reference book for more in-depth inquiries. The reason for this is that the Kandel book is really dense and somewhat poorly organized, which makes it rather inefficient to a neuroscience newcomer who mainly needs the basic ideas.

More important than which book you pick up, though, is how you read it. It's very important at this stage to really start thinking about the big questions in each subfield so that 1) you don't gloss over important details or, worse, crucial principles; and 2) you're preparing your mindset for research. You can't read it as a passive observer, absorbing information rather than processing it. Ask questions. How do we know this and this about the brain? What principles can we anticipate about the brain (and by implication: perception, memory, cognition) based on its structure and development? When do neurons first start firing anyway? If you're doing it right, you'll be making use of Kandel a lot to probe deeper — and eventually review/experimental papers when you're ready.

tl;dr - Read that shit if you're doing research and you'll thank me later.

If you want the 'biggest head start', sad but true answer is a textbook. Preferably a used old edition of one. for example


Behave by Robert Sapolsky is usually the book I see here recommended when brain science comes up, though.

My focus is theoretical neuroscience, but even still the best resource I found was taking an actual class. I took Introductory to Neuroscience from UC Extension in California. Other then that I also followed the course material from: http://redwood.berkeley.edu/wiki/VS265:_Neural_Computation

I really like the book from my introductory course:
Neuroscience: Exploring the Brain, http://www.amazon.com/gp/product/0781760038/ref=wms_ohs_product?ie=UTF8&amp;amp;psc=1

The coursera course on Computational Neuroscience was interesting and if you are CS I highly suggest it as a way to get interested in the field.

Other then that I use Google scholar search to find papers about subjects I am interested in and read those. Currently doing a lot of reading in spare representation.

If you're looking for some basic neuroscience (which you'll definitely need in neural engineering - I was looking into doing it as well), then I highly recommend Neuroscience 3D: Exploring the brain. It's a really good beginner-medium text book, that covers everything from how EEGs work, to how individual neurons communicate with each other to brain disorders.
Here's a link:
http://www.amazon.com/Neuroscience-Exploring-Brain-3rd-Edition/dp/0781760038

Source: I'm a neuroscience student and that textbook is prescribed for most of my courses

It was my textbook this past semester for Neurobiology. I absolutely loved it. The things you're probably interested in (motivation, memory, learning, neurogenesis) form the last quarter of the book.

&gt;Statistics for the Behavioral Sciences

Hey! Thanks for the suggestions. Could you confirm if you are referring to these books?:

Used this for my comprehensive exams.

As others have mentioned, Bear's Neuroscience: Exploring the Brain (can get used very cheap here)

As a much lighter read I'd recommend Iversen's Intro to Neuropsychopharmacology. You can read the whole thing in a few weeks, and it is a good intro to all the neurotransmitter systems and their basic physiology and behavioral effects.

The textbook Neuroscience: Exploring the Brain by Mark Bear could be a great start: https://www.amazon.com/Neuroscience-Exploring-Mark-F-Bear/dp/0781760038. Some books for the general public such as David Eagleman's The Brain or Rita Carter's Mapping the Brain are good too (although they might be too easy for you given that you are a med student).

As for brain mapping, not sure if you are talking about connectome or the Blue Brain Project?

Campbell Biology 8th edition. Get is used, it's only a few bucks.

Neuroscience; exploring the brain is also a great book that goes far more in-depth. The first part of the book is devoted to the very basics of biology and cell structure following the same foundation as any other biology book.