We found 19 Reddit comments about Nextbit Robin Factory Unlocked GSM Smartphone - Midnight. Here are the top ones, ranked by their Reddit score. 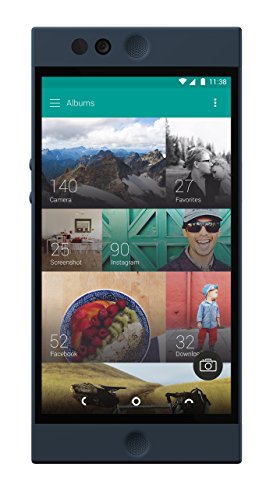 Also, it's pretty cheap at the moment. (US link) The mint colour really isn't for me, and I'm happy with my own phone, but for us EU folk, here it is again. (.de Link) Pretty cheap as well!

If you want a phone that's similar to the Nexus 5X but cheaper you could try the Nextbit Robin ($170 on Amazon). It has almost the same specs but with 1 extra GB of RAM. The 5X's 2GB RAM was a problem for some people so the extra gig should help. The camera on the Robin is not as good though, and the battery life is about the same (average but not fantastic for either phone). UI is mostly stock except for some tweaks, and it has an unlockable bootloader and dev community if you are into that.

If you want a bigger upgrade, I would probably go with the OnePlus 3T. It's a little out of your budget at $440, but it has high end specs and will be more future proof.

I think one of the best deals going right now is the Nextbit Robin. Looks like it's down to $170 today.

I will 100% agree with this. While the Nexus 4 was a great phone in it's time (I had one myself), it's a 5 year old phone and even a new really low budget phone (i.e. the Blu R1 HD that you can get from amazon for $60 w/amazon ads) will outperform it.

I personally have the Nextbit Robin. It has almost the EXACT specs of a nexus 5x, a google nexus phone two generations newer than the Nexus 4 and one that costs just shy of $300 new from ebay, and is better in every single way, while being $15 more expensive than the nexus 4 you're looking at, new. (i.e. $130 from amazon)

It has more RAM (3GB vs 2GB), a MUCH better processor, more storage (32GB vs 16GB), bigger and better screen (5.2" 1080p vs 4.7" 720p), not to mention a tonne of newer features which the nexus 4 doesn't have - fingerprint sensor, NFC, USB-C, fast charging. It is near stock android (updated to the latest version, Nougat, last month) and if you don't like it you can download the Nougat launcher to make it look exactly like stock android

While I am obviously biased towards my own phone, I'm basically trying to say that most, if not all, new phones in the $100-150 range will outperform an nexus 4. The new moto e4 can be bought for $100 (with amazon ads) or $130 without, has stock android, and I believe would be a much better overall experience - it has fast charging and a fingerprint sensor. Stretch your budget to $200 and you have a whole host of really good phones that will not only outperform the nexus 4, but blow it out of the water (see the moto G5plus)

The Nexbit Robin is $145 on Amazon!!! Don't know about international shipping but at that price it may be worth it anyway. Even though I don't need a phone I am thinking about just buying one anyway.

if you can extend your budget , this is a good one for 145 + 1 year warranty and brand new.

GSM unlocked (T-Mobile or AT&amp;T, or their MVNOs), 5.2" screen, 32GB, 3GB ram, Snapdragon 808, fingerprint reader, NFC. Comparable to Nexus 5x. No warranty as of August 1 because they were acquired by Razer. Updates to Android N. https://www.amazon.com/Nextbit-Robin-Factory-Unlocked-Smartphone/dp/B01D3Q8EGY?th=1&amp;amp;psc=1

The Nextbit Robin by far! Feels like a high-end device.

Here's another option - though I've read the battery isn't the best.

for the "good" part of your question, you need to understand a thing or two about the bands your phone can receive. here's a list of phones which can use band 12 (a newer band expanding coverage) and are VOLTE capable.

I picked up a Nextbit Robin when my Nexus 6 was starting to get on my nerves. Pair that up with Tasker as others have said. It gets a little hot and the 100GB of free cloud storage is going away in February, but I don't care.

Going out on a limb here and saying the Nextbit Robin might be worth a look. The company has admittedly been purchased by Razer in the past few days, but there is no denying that the Robin (for the price) is an incredibly good and well-supported phone.

Amazon.com has a flash sale right now for U$117.99 if you have redirect service (it's shipping within USA only).

what are the specs you want? Not to undermine these guys but...

Flagship from 2ish years ago

Nextbit Robin. Roughly 8k not counting shipping. It's probably the cheapest price/power phone I can find, not counting local brands (and Asus. Still not touching them...)

Here's what confuses me. I can ship through Amazon directly, but then have to meddle with customs. Or I can forward it via My Shopping Box (what GCash uses, apparently), but then I'd have to pay extra for their service. Is that right?

You would absolutely notice a huge speed difference. I would also recommend looking at the Nextbit robin. Its $159 on amazon now https://www.amazon.com/Nextbit-Robin-Factory-Unlocked-Smartphone/dp/B01D3Q8EGY/ref=sr_1_1?s=wireless&amp;amp;ie=UTF8&amp;amp;qid=1483835712&amp;amp;sr=1-1&amp;amp;keywords=nextbit+robin . It is a super smooth phone with great battery life and a fingerprint sensor. It has the same internals as the Nexus 5x and has phenomenal front facing speakers. And the squared design is so easy to hold.