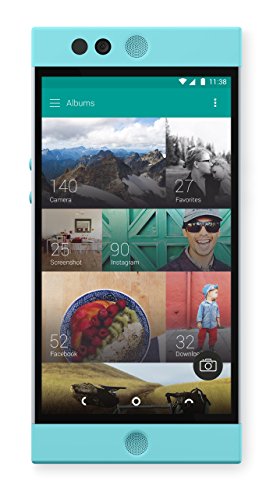 The Nextbit Robin for either 150$ on eBay if that deal is still going or 170$ on Amazon.

Snapdragon 808, fingerprint reader, usb-c, soon to be updated to Nougat, almost bonestock Android build with Nextbit additions, 32GB, NFC, 3GB RAM and 5.2" 1080p display. Imagine the iPhone 5c. You'll either love or hate the design. It feels like holding a Hershey's chocolate bar. I love mine.

Edit: plus it has quick charging and is unlocked

It's hard for anything in this price range to compete with the Nextbit Robin, IMO. For $150, it has a fingerprint reader, NFC, headphone jack (lol), 1080p IPS display, dual speakers, comparable or better internals than other phones in the price range, and a near-stock UI with an official update to Nougat available. Sure, Razer is only honoring the warranty for six months but Le Eco is also pulling out of the US so who knows how long that warranty will be good for, either.

Ok, but you should know that a third party has listed the Robin on Amazon UK for £639. You probably can't do anything about it but an official listing might be best.

Also, it's pretty cheap at the moment. (US link) The mint colour really isn't for me, and I'm happy with my own phone, but for us EU folk, here it is again. (.de Link) Pretty cheap as well!

At the moment it's $159 on Amazon, but they have regular deals too, it was $145 just before Christmas.

&gt; Would you recommend anything else with a better battery than the Robin?

If battery life is more important then the Moto G4 is a better choice, but if you're after performance and developer-friendlyness then the Robin is better.

Here's something that hasn't been mentioned: Nextbit Robin


It's going for $170 on Amazon. It's got an extra GB of RAM but doesn't run pure Android out of the box (there are pure Android ROMs available). The fingerprint scanner is on the side of the device.

The Nextbit Robin with 32gb storage is also a Prime Day deal today for $240.

I got this one for my son recently. Specs are pretty similar to the 5x, but the camera isn't quite as nice. Otherwise a nice phone.
https://www.amazon.com/Nextbit-Robin-Factory-Unlocked-Smartphone/dp/B01D9LVCAI

Probably lower specs than you'd like, but I've been enjoying my Nextbit Robin

I bought mine on Amazon for $150 and I've had it for a month already and im loving it so far.
This is the one I got: Nextbit Robin Factory Unlocked GSM Smartphone - Mint (U.S. Warranty) https://www.amazon.com/dp/B01D9LVCAI/ref=cm_sw_r_cp_apa_CYnpzbTP10RY2

EDIT: Here is a history of all my devices

For which budget? For low-end phones, the iPhone 5S and Nextbit Robin are the best.
iPhone available at cricketwireless.com and Robin at Amazon: https://www.amazon.com/dp/B01D9LVCAI/

I have a Nextbit Robin. It might be what you're looking for.

First of all, the price: you can grab one on Amazon for $150 right now, and I can't find a single phone that has nearly as much power for such a great price. It's probably the best $150 phone you'll ever touch. Significantly better price than the Oneplus 3T, or anything else in this threat. An 808, 3GB of ram, 150 grams, very fast charging, and it has USB-C, which sure is nice.

Stock: It's pretty close to stock Android. Nextbit has their own (not very good) launcher, but you can just use the Google Now Launcher or the Pixel Launcher if you prefer. They're also pretty good at updates; currently on Nougat. The only major differences are the icons on the navigation bar (they're a bit rounder and childish-looking) and the color of the notifications shade (it's much brighter and whiteish).

Appearance: Okay, I know people sometimes trash-talk it, but I can't get through a full day without people asking me about this phone. It's so hecking pretty. I got the mint one and oooooh I feel so sad putting this thing in a case because it's so pretty! It looks totally different from any phone you've ever seen.

ROMs: This is Nextbit's best feature. Fuck around with ROMs as much as you want on this thing, and they'll honor the warranty no matter what's installed on it. I'm running Lineage OS (the successor to Cyanogenmod), which is really really close to stock Android. Lineage is smooth as hell on this thing. And because of Nextbit's warranty rules, the ROM community for this device is pretty big, and it'll be supported for a while.

Keep in mind that if you buy a Amazon Prime Edition the bootloader is going to be harder to unlock on the Blu R1 HD and I don't think you can unlock the Amazon Prime Edition of the Moto G4. I recommend getting the Nextbit Robin, it's made almost completely of plastic which makes it really cheap at $150 even though it has a Snapdragon 808 (same as Nexus 5X), it's also easy to install a custom recovery and gets a lot of rom support and it also works on AT&amp;T.

It's the Mint one though.

I don't know about Canada, but the NextBit Robin is in many ways similar to the N5x but with 3GB of RAM and currently only $130 on Amazon:

Have you looked on amazon? https://www.amazon.fr/NB-RG02-Nextbit-Robin-Smartphone-Mint/dp/B01D9LVCAI

Maybe try /r/phoneswap to get a GSM phone?

Alternatively you can get a pretty nice Android phone brand new for $150. The Nextbit Robin is an absolute steal, IMO. Works very well and it's a factory unlocked GSM phone so you'll have no issues just inserting your Cricket SIM and being g2g. https://www.amazon.com/dp/B01D9LVCAI

Nextbit Robin has a finger print sensor on the side and front facing speakers.

The Nextbit Robin is currently available on Amazon for +/- $170, it has specs equal or slightly better than the 5X, and very close to stock. I personally upgraded to it from the Nexus 5. Here's a link for it: Nextbit Robin Factory Unlocked GSM Smartphone - Mint (U.S. Warranty) https://www.amazon.com/dp/B01D9LVCAI/ref=cm_sw_r_cp_apa_wUenyb4J7PWXP

Ok so this one is pretty straightforward. You're looking for a great phone that isn't an iPhone and works well with T-Mobile?

check out the Nexbit Robin. It supports VoLTE and Band 12 after an update. only $149

No one is talking about the nextbit robin with an 808 fingerprint scanner, 32GB storage, free clound storage, 3GB ram, unlocked bootlader, dual front facing speakers, usb type c for only $230

Which network? My 6 volume rocker died. I couldn't be convinced to invest in anything just yet so I went with the Nextbit Robin to hold me over. Slightly smaller screen. Two speakers. NFC. Fingerprint sensor. 32GB onboard with 100GB of cloud storage that is going away in February. Great Android experience. I went with the black with a mint power button for $130.

I use the fingerprint sensor 50 times a day, NFC a few times a week, and Android Auto for two hours a day. I love it. I get compliments on it once or twice a week. The biggest pain was having to buy USB-C cables but now I like not having to orient my cable before plugging it in.

It will take a lot to convince me to get something significantly better that is worth the price increase, although I may need a Verizon-compatible handset soon if I'm going to consider switching to Xfinity Mobile.