Reddit reviews Notre Dame Vs. the Klan: How the Fighting Irish Defeated the Ku Klux Klan

We found 9 Reddit comments about Notre Dame Vs. the Klan: How the Fighting Irish Defeated the Ku Klux Klan. Here are the top ones, ranked by their Reddit score. 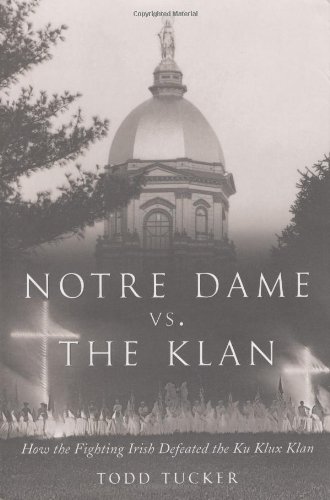 9 Reddit comments about Notre Dame Vs. the Klan: How the Fighting Irish Defeated the Ku Klux Klan:

Remember that one time that Notre Dame (Four Horseman included) had fought the KKK?

No? Here’s a book

&gt; On a systemic level, in the USA, have white people experienced racism?

All white people are the same? Catholics, Muslims, or Jews? What about Poles, Irish, or Italians? Do you think all these differing groups were just collectively welcomed and embraced? That they didn't face similar issues that people of color face today? Are you that naive and ignorant? Hell it was a big deal that there were no Protestants on the Supreme Court recently or that Al Smith ran for President in the 20s. Go read some of the Founding Father's views on Catholics or "papists" as they were known as. Here is a book for you maybe to inform you a bit about discrimination and issues that whites had to deal with. Whites certainly faced plenty of issues and to gloss over it and ignore these differences is ignorance at it's finest. Plenty of 'white' people absolutely faced similar problems. Have those problems lessened over time as the 'melting pot' erased some of these differences, yes, but a statement like you made is wholly ignorant and offensive. I'm not here to compare who has had it worse the Irish or the Blacks. The whites or browns. But you demonstrate a complete lack of empathy and knowledge of history. If we're ever to overcome these differences (like many white immigrant ethnic groups somewhat have), then we need to stop arguing semantics and getting into a victim pissing contest and work towards treating all of our fellow humans equally and with respect.

Some great historical reading for those who may be interested: Notre Dame Vs. The Klan, by Todd Tucker.

Description:
&gt;The riveting tale of the clash of two powerful institutions Notre Dame and the Klu Klux Klan that changed both institutions and America forever.
&gt;In 1924, students of the University of Notre Dame and members of the Ku Klux Klan faced off in a violent confrontation in South Bend, Indiana. This shocking and true hidden chapter in Catholic and American history is recounted in Notre Dame vs. The Klan, the story of two uniquely American institutions that rose to power amdist rampant anti-Catholicism and collided druing a riotous weekend.

There’s a decent book that was written if you’re interested in learning more. I read it a few years back. If I recall correctly, it started slow but was overall a good read. Apologize if this is mentioned in the podcast. At work and can’t listen at the moment. Not trying to be redundant.

your right, in particular nd and the kkk have some famous history.

I believe OP was referring to 1924 and this: https://en.m.wikipedia.org/wiki/Indiana_Klan

It was the closest the clan ever had to controlling legitimately state government.

You might want to check out this book. In parts, it explains that the Klan is weakened when ignored, and it demonstrates how the Klan grows when confronted. Plus, it's got some great history of Notre Dame football in it:

I actually just read a book about how ND students successfuly ran the KKK out of South Bend in the 1920's. Great read about the time period and the history of the school.
http://www.amazon.com/dp/0829417710