We found 3 Reddit comments about PAC PAC-200 200 Amp Relay Battery Isolator. Here are the top ones, ranked by their Reddit score. 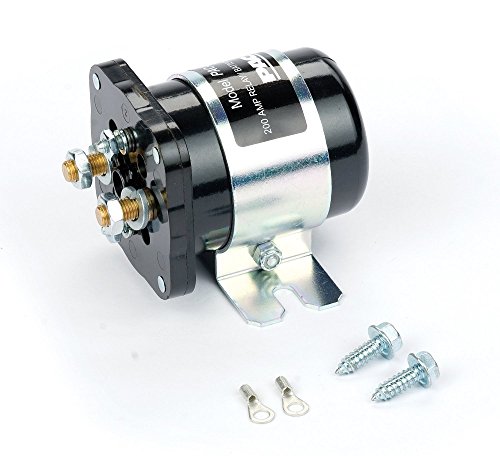 This is the one I bought

These are some shitty ones I took while working on it. A bit of it has been revised.

Link to part references on alternator:http://www.gmt400.com/threads/96-98-vortec-alternator-upgrade-ad244.232/

I actually needed a new alternator anyway, so I tossed it in a week before I put in the second battery.

I had most everything lying around as spare parts from other projects except the isolator, and the batteries were more or less about 75%-85% off list price because the person I bought them from didn't know how to charge them properly (Thank you, Craigslist). I wouldn't personally recommend Optima's, as I've heard that they're quality has tanked pretty hard in recent years since moving to Mexico for production. Everyone has their favorite brand, though, and to be fair they've treated me extremely well while I've had them. The wire I had laying around was I think 2gauge, (although I think factory wiring for GMT400s is 4 or 6).

DISCLAIMER: IF YOU GET SHOCKED, ELECTROCUTED, SET FIRE TO, OR ATTACKED BY SQUIRRELS NOT MY FAULT

REMEMBER TO DISCONNECT THE BATTERY FIRST

The first thought I had was of where to put the isolator, which I decided to mount directly to the fender underneath the ECM. So I pried up the ECM:http://imgur.com/Eyb9V0D

The next thing I did was put the isolator in the spot and check the fit by reinstalling the ECM. http://imgur.com/H4aWyCD

After making sure it mounted up flush and didn't have any issues, I used the bracket included with the isolator to drill the mounting holes:http://imgur.com/WNOTapa I'm not sure of your climate, but I spray painted over the bare metal after I had the holes drilled just to make sure (standard black primer).

Next I don't have a picture of, but I actually connected all wiring to the isolator including the fuses. This was just down to being a lazy sod, as it's easier to wire things up while they're out of the space for the ECM bracket than inside. A friend of mine who deals with electricity way more than I do (and has been shocked less than I have, therefore meaning he's probably better at it) said to use two fuses on each side of the isolator to be on the safe side. So the diagram would look like:

The small wire on the bottom is the ground for the switch, the wire leading off to the left is of course the hot wire for the secondary battery, and the wire that runs to the right is for connecting to the fuse/relay/AUX center under the hood. With fuse holder in place:http://imgur.com/bunOUp2 Note that I'd go with a better fuse holder, but this is what I had laying around.


Next up is bolting everything down. For the fuse holders I just used the screws that came with, they were self taping so no need to drill the holes. The bolts in the picture I actually just tossed in because again, I had them on hand. I've since replaced them with some auto bolts and locknuts, and then of course spray painted black on the underside to help prevent rust or corrosion. Also again I put the bolts pointing the wrong direction, while the ones I've used now have them mounted heads down so they don't ever have a chance of catching anything (like my hands while I'm working on the damn thing).

Next up is where to actually put the cable to the Fuse/Relay/AUX block. This is something a TON of people get wrong on these trucks. Here's the best way to put it:https://imgur.com/dCiQa8f That lower stud actually is where the other battery cable mounts to the truck as well (the line that runs across the radiator cowl dips, ducks, dodges, and terminates there). The two posts on top are actually for for easier tapping into the electrical system (things like plows, trailer brakes, etc can be run from here). EDIT: DESPITE THE PICTURE, THE PASSENGER SIDE BATTERY AND THE SECONDARY BATTERY MOUNT ON THE SAME STUD. They should both mount on that side stud that 'points' to the fender of the truck. The top posts are just for AUX cables for accessories.

The final part of all of this is wiring the isolator correctly. The one I used and posted the link to has four posts: Two large posts (for to/from the battery) and two small. One small post is for a ground wire. The other one is to actually activate the isolator. You can do this either with a manual switch, or you can do what I did and run it to a port that is only hot when the truck is turned to the ON or START position of the key.

And where I ran it inside the cab: http://imgur.com/1iYnEf6
The wire actually starts out as red but ends as white (because that's the only fucking connector I had on hand that would actually fit that tiny ass little post in that damn box). You're on your own finding your way through the firewall, I already had a spot open because of part of a stereo/backup camera install. Use a rubber grommet at least, and if you do have to drill a hole be extra careful of where you put it.

Connect the batteries, then insert the fuses and get your multimeter. Hold your multimeter prongs to the primary battery, then have your handy dandy wife, 4 year old, or well trained dog flip the switch for your headlights. The voltage should drop slightly. Have them turn off the lights (after the second time yelling "Okay, turn it off"), then move to the secondary battery. Put your multimeter prongs on the terminals, then tell them to turn on the lights. If wired correctly there should be NO DROP in voltage. Tell them to turn the lights off (again, on the second time going "Okay, turn off the lights!"). Have them crank the truck and check your voltage on your primary battery; it should be higher now that the truck is cranked and the alternator is running. Then move to the secondary battery and check the voltage there. If you wired it correctly, then the isolator will have switched to the "ON" position and it will also have a higher voltage than your first test. This means that the alternator is maintaining the charge on both batteries when the key is in the ON or START position on the column. Yell for your helper to turn off the truck ("Seriously need to have their hearing checked"), and tidy up.

If I had to Do It Again (and I will after a few more upgrades):
I'd use a better fuse holder, something sturdier. It isn't that the one I have doesn't work, just that I know it isn't super sturdy and that bothers the living piss out of me. Now that I think of it, waterproofing wouldn't hurt. I'd also look into premade rubber caps for the terminals rather than what I have currently, which is electrical tape and painted on rubber. Do NOT over torque the bolts on the isolator, as they can very easily be stripped.

The benefits of dual batteries is probably already known to you, but just to reiterate: If you're adding a winch, use it while the vehicle is cranked and running. If you aren't going to be running, then make sure you get a battery that can deep cycle (manufactures make some that are decent at both starting and deep cycling, but not masters of either). Also make sure you don't wire your accessories to separate batteries, or you'll run the risk of running both down at the same time despite isolators and not being able to be helped because damnit that shit was hilarious and we were laughing to hard to get the jump cables.

Edit: Also check out GMT400.com, it has a bit of information on our trucks. As per the norm with the Internet in general and forums in particular some of it is over pandering bullshit and some of it is solid information.

I have it and it works great.