Reddit reviews Passions Within Reason: The Strategic Role of the Emotions

We found 4 Reddit comments about Passions Within Reason: The Strategic Role of the Emotions. Here are the top ones, ranked by their Reddit score. 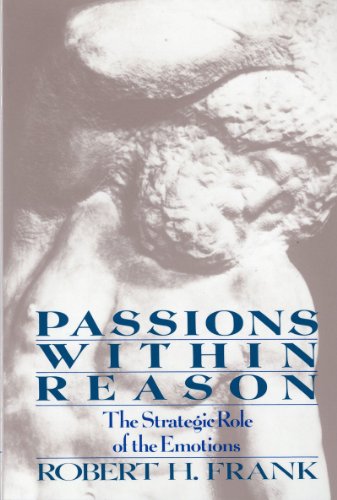 4 Reddit comments about Passions Within Reason: The Strategic Role of the Emotions:

Preface: This is my first post and it ended up rather larger than I intended, but such is the nature of this subject matter. Additionally please forgive any spelling/grammar errors, I am far from perfect in this regard and have come to rely too heavily on auto correct which constantly misses "to vs too" and so on... Bellow crept into my honours thesis when it was supposed to be below, you end up reading what is in your head not what is on the page, and for that I appologise in advance. Gulp Here goes the submit button.

I am doing my PhD thesis on something in this area (I am a philosopher) and thought I would just give my $0.02... which is actually a bit steep for what its worth. There is a way out of this "pathological trap" I think but it requires a fundamental overhaul of the way we treat the social sciences as a whole. There is essentially two things going on in what we label "social science" one is immutable and unchangeable and that is science, the other is closer to a social strategy than anything else. If a theory depicts the best strategy in a social situation it is not a science, it is a strategy, it does not tell us this is how things are, only that this is something we could choose to do. A lot of people seem to be confused by the difference. A scientific theory by itself is ethically neutral, it either is or is not the case. A strategic theory is not so disinterested, it is something that may be willingly acted upon with our own free will and the fallout of those decisions is on we, the actors.

To give an example, we know thalidomide works on suppressing nausea, and there was a time we did not know it caused birth abnormalities. So a strategy was devised. Given what we know about thalidomide we should use it to treat morning sickness. Strategy worked, really well, and 9 months latter had unforeseen repercussions. We would nail a doctor to the wall for administering thalidomide in this day and age to a pregnant women, s/he could not hide behind "its science and thus ethically neutral!" the strategic decisions of the doctor make him/her morally culpable.

Now the undergrad economists out there will shout "but where are you going with this, thalidomide has side effects, there are no side effects with neoclassical economics" while the post grad economists will shake their heads at them (not in all but in some cases, most undergrad economists I know are very sure of their discipline while most post grad and lecturers are much less so). Neoclassical economics (or more precisely in this case, the self interested "rational" agent) has essentially created a gigantic prisoner's dilemma, and the mantra is "fuck less yee be fucked" (again, granted not in all cases but usually where issues like these arise)

I can imagine two opposing cries from the same field, one saying "but that's just a model to facilitate prediction!" and the other saying "you obviously are misrepresenting "self interested" it is just to facilitate an agents unknowable motives!"... but this is confusing which is it? something definite we can use for prediction or a place holder because we cannot predict humans? It cannot be both, one of these options supposes that we are going to get reliable results from it, the other that we just call whatever happens "self interest" and have no way of knowing what will happen, or that we will just confirm all the results we get after the fact. (I cut some info here about Thomas Reid and his theories on Credulity and Veracity, I will link it in the reference at the end) It is in actual fact a worst case scenario, when Adam Smith used his butcher baker brewer example it was an appeal to their self interest not because they will not respond to anything else, but because it has more chance of working in worst case scenarios as well as best case scenarios and everything in between. This is a strategy, and I must admit a rather compelling and persuasive one. Here in lies the reflexivity, which is the amount a strategy is persuasive in terms of the decisions we make in the real world, that have a direct impact on the results predicted by the strategy. (Sorry that is rather confusing... "What will really cook your noodle later is would you still have broken it if I hadn't said anything?" - The Oracle - The Matrix [sorry if that's a misquote no time to go back and watch it again])

Sandri has done experiments into this area in ultimatum games, PD games and so forth, turns out that you are more likely to follow the expected results when you know what the expected results are and why. Who would of thunk it aye? I am not suggesting that if you learn about capitalism you will instantly be transformed into a monster or even that it is a sure thing, just that the arguments/strategies generated from what you learn are now part of the internal deliberative process when it comes to decision making in the area it is concerned with... it had damn well better be or what is the point of studding it? The point I am trying to make is that the results change after people have learned about the theory and the expected results... if it was a science they would not, only game theory and strategies do this. These are better models for understanding, explaining and predicting behavior for social strategies than some idealism of absolute knowledge, luckily we kind of recognise this.

So I mentioned there was a way out?

Well as the champion of neoclassical economics (Friedman) once put it in a paper on positive economics, the predictive power of a theory is more important than the assumptions that go into it, now I disagree completely but I cannot fault his reasoning... he just has his assumptions wrong. So knowing that knowing a theory makes you more likely to pursue it (the exact amount of which varies from theory to theory, even its valance changes but I wont bother with that here) and that it is a strategy and the actors employing that strategy should be morally culpable just like the thalidomide doctor. This in turn alters the weights in the game, I could choose to fire those employees and get a pay rise and call it efficiency, oh but my science is now widely recognized as a strategy and knowing that, I am also a fuckwad for doing it. But first why would it be widely recognized as a strategy? And second why should I care if I am a fuckwad?

First: predictability, we can get more accurate results, by treating the strategies as strategies rather than sciences. Sure we also need to admit that employing these strategies makes us ethically responsible but that's a small price to pay for more accurate predictions right?

Second: Because people don't actually like to be fuckwads in general (outside of the internet and high school I mean)... it's a ghost, a boogieman, none of my friends act like the self interested rational agent to the point of being a fuckwad, well ok may be once or twice but they are usually repentant and remorseful for it (myself included). However, what about all of them out there? Just because I have overwhelming experience completely contrary to this construct does not mean that the rest of the world is not out to get me! I just happen to know the best people on the planet and the rare few. So it is ok if I am a fuckwad to those strangers out there because they would of been a fuckwad to me right? No, of course not, it is unacceptable for anyone to be a fuckwad. Fuckwad is not the norm we should strive for, no matter what the strategy tells us. But this reflex stems from the very understandable desire "not to be the chump" to take Robert Franks words.

Not all of these strategies are bad mind you some strategies are really good (even within neoclassical economics, and capitalism as a whole) for everyone and these now (after we accept them as strategies and have accounted for reflexive influence... not going into that here) have probably a greater weighting, given the new information, we may finally stop prescribing thalidomide to pregnant women.

Are there tons of holes in this argument, sure. But cut me some slack I kept it under 1000 words... well I did initially now I check it it is around 1500. Also it may sound like I am picking on neoclassical economics here and its not really my intention, it is the strategies that it generates and their persuasive nature, even then this in itself is neither good nor bad till some one actually acts on them. And all of the social sciences have some amount of strategies within them and the reflexivity entangled with that.

Some of the things/people/articles referenced not putting up a proper bibliography here as it seems to me this may be more productive in giving credit for those that lack access to JStor and the like.

http://www.amazon.com/Reflexivity-Economics-Experimental-Self-Referentiality-Contributions/dp/3790820911 Sandri (warning horrably esoteric and dry read... very informative but yeah... it's a hefty price for eye sand paper.)
http://www.amazon.com/Wealth-Nations-Bantam-Classics/dp/0553585975 Smith (also available on Project Gutenberg, I think so many people quote the bits that help them and ignore the gigantic tracts that condemn them from this)
http://www.amazon.com/Essays-Positive-Economics-Phoenix-Books/dp/0226264033 Friedman (The guy was brilliant I cannot take that from him, Samuelson disagreed and so do I and they managed to remain friends and civil. I wont reference any Samuelson here as it is not really relevant to the current discussion out side of the "scientification" of economics by the mathematisation and formalising of economics.)
http://www.amazon.com/Passions-Within-Reason-Strategic-Emotions/dp/0393960226 Frank (Cracking read)
http://www.amazon.com/Inquiry-Human-Principles-Common-Sense/dp/0271020717 Reid (Another Cracker and well ahead of its time I think, Also I have just discovered I have lost my copy.)
http://www.amazon.com/The-Matrix/dp/B000HAB4KS (For the hell of it)

Thanks for making it this far.

Robert Frank, an economist, wrote an excellent boom on the subject of emotions called "Passions Within Reason." that might be useful to answering your question. Basically, Frank theorizes that emotions are a "commitment device" that lead us to behave in certain ways that are beneficial. The book also starts off with the most entertaining and enlightening account of your American clan rivalry between the Hatfields and the McCoys. It's worth reading for the first ten pages alone. Here is a review that does his argument in this book more justice than I have above.

The basic idea is that love can function as a precommitment device, ensuring better long-term outcomes for both partners.

This is the first official episode of the Chameleon Philosophy Podcast. This episode of the podcast covers the intersection of evolutionary history and moral thought. I cover many different thinkers who will be linked below. This podcast also goes into the fundamental disagreements of utilitarian theory and moral pluralism on the subject of human emotions and their importants within our own ethics.