We found 2 Reddit comments about Practical Art of Motion Picture Sound, Second Edition. Here are the top ones, ranked by their Reddit score. 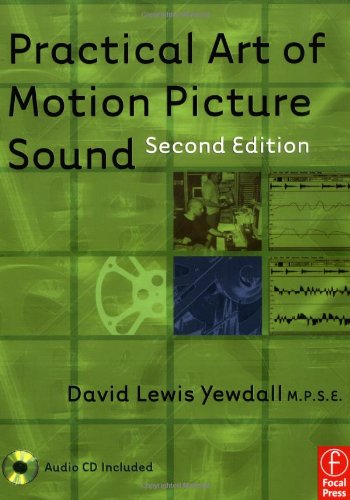 Post sound is a difficult world to get into. I tried to go the "no school" route before I gave up and enrolled. I learned more in my first quarter than I did from a year of teaching myself. I know for a fact it's do-able because people make it in without a degree. I'm just not entirely sure how they manage to teach themselves everything they know.

There are lots of very specified jobs that require different sets of skills.

Based on what skill set you want to focus on, you'll need access to different types of equipment.

There are two ways you can go in post production, you can either work for a post house, or work as a freelancer as a supervisor.

I'm going to focus on a post house route.

If you choose to work at a post house (in America), you'll need to know Pro Tools. In many places in Europe you will need to know Nuendo. There's slim to no wiggle room in this regard. Both of these programs are designed for the types of workflows required in post production from receiving an OMF to delivering editing sessions built for a mixing stage.

In a full fledged tv editing job, you'll need to be able to turn over a 30 minute tv show in 2-3 days. Frankly, the type of people who can do this have been working on television for the last 10-20 years. I personally have a huge admiration for these editors. A lot of people criticize how bad television shows sound these days, but knowing what's happening behind the scenes you really have to admire what they're able to pull of in such a short amount of time.

Independent features in a post house have similar frames of time. You might have a day or a week depending on what the producers set aside as a budget for post sound

Probably the lowest prerequisite job in a post house is an assistant editor, or a tech. They're surprisingly hard jobs to get, but they're great for getting your foot in the door.

Assistant editors are often the people who clean up sessions, re-label sfx, archive tapes, and perform session conforms. A lot of this work is deceptively difficult, and is worth reading about more in depth.

Techs are usually the people who keep things running properly. I can't remember too much about the common pre-reqs for this job, but I know that having pro-tools certifications are helpful to have. (In America at least)


Most editing positions are the least hardware intensive

If you decide to work in sound effects or BGs editing, you should know Sound Miner. As far as I've experienced so far, it's the industry standard for sound effects management and editing.

These two jobs are extremely stylistic and rewarding jobs, but it's a two edged sword. You're in service to a director and a sound supervisor. Your job is to give them what they want, and you need to be the type of person who can keep their opinions to themselves and do what you're told. You might work meticulously on a scene only to have one of these two people say they hate it and have to start over again. You'll find more and more when you work in these positions your job becomes more about good communication than actual editing.

Foley editing is pretty simple and usually doesn't have a single dedicated editor unless you're working on a very foley intensive film.

Dialog editing (aka the dark arts) requires a very specific type of mind set. Creatively it's fairly limiting unless you have a fair amount of time on your hands. Almost every production needs dialog editors, but it's pretty difficult to get into without some form of mentorship. It's impossible to practice unless you're already working on a film. I haven't checked out the new Purcell book, but I really hope the offer an OMF/AFF of a reel to work on.

Now on to your specific questions
&gt;
&gt; Is it possible to pick up some books off amazon and start developing a demo reel?

Yes! I think the biggest first step is to get a firm idea of post sound, and the physics involved with audio. I'd strongly recommend
Practical Art of Motion Picture Sound and Audio in Media

I think the biggest thing you need to know about making a demo reel is to get hired at a post house it needs to have original content. No one cares if you re-dub a youtube clip of a movie you like. If they've seen the movie you're re-dubbing, you already lost. It could be an awesome sound replacement, but they know what it's supposed to sound like, and they're looking for a multimillion dollar sound from an amazing sound studio. It's definitely worth adding something that shows you can edit for explosions or action heavy scenes, so in that regard, redoing a youtube clip would be useful.

I would start out with re-doing audio though! It's a good practice, and it helps build a portfolio for freelance clients when you're starting out.

&gt; Any resources that i should look at before i pursue this?

Check out the blog designing sound. A lot of the masters of sound design hang out on this blog. Sound stack exchange You'd actually be surprised who hangs out on this forum. There's a number of knowledgable people who hang out here. I pop in time to time while browsing Reddit to see if anything interesting is happening here, though it's pretty slow.

I saw your exchange with KarateJesus. Be careful how you talk to people online. It doesn't matter now too much, but if you're getting into a field like post sound that's a people's business, you need to treat people as best as you can all the time. He didn't say what you wanted to hear, but a lot of this business is luck. You need to know the right people at the right time. The freelance jobs out there usually come from people you already know in the business. Otherwise keep looking on Craigslist until a job shows up. Another good route is to do work pro-bono for your local college to meet people.

No, probably not. I think a one year school could prepare you for how involved post sound is. A four year school couldn't even prepare you really. A class or education can help you better understand what's expected of you in the professional world though. I think most of those programs are designed to make you technically proficient with programs and to get an understanding of the pipeline of post sound, which is not at all what's important. Workflows and technical proficiency change work place to work place. What's most important is that you're a good story teller, and a compatible co-worker everything else is just luck and adaptability to the situation.

TD;LR
Post is demanding, and requires very archaic skill sets. I hope I didn't scare you away from post, but it's good to know what you're potentially getting into.

Books
Practical Art of Motion Picture Sound by David Yewdall
Sound Design: The Expressive Power of Music, Voice and Sound Effects in Cinema by David Sonnenschein
This Is Your Brain On Music by Daniel J. Levitin Not directly sound design but still very interesting and useful.

These are just some of my personal picks but I'm sure there are plenty more resources out there.