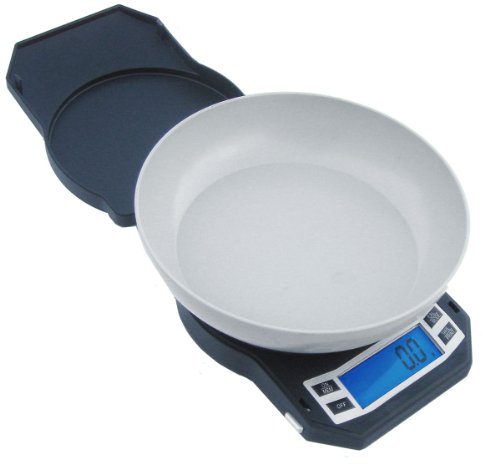 LIGHTWEIGHT KITCHEN SCALE: This digital food scale measures 7.3" x 5.5" x 1.5" and only weighs 1.12 pounds. It's the perfect size for measuring ingredients for your baking and cooking creations.LARGE BOWL: With your purchase, you'll receive a large expansion bowl that can help contain your ingredients while measuring. The bowl can hold fruits, vegetables, coffee, and more!LCD SCREEN: The digital scale's backlit LCD screen makes numbers viewable and easy to read—even in dim lighting. Thanks to high-precision sensors, you'll get an accurate measurement every time.BUILT-IN COVER: Keep your electronic food scale safe with the built-in plastic cover. It will keep your scale looking like new and protect it from scratches, bumps, and everyday wear and tear.HEAVY-DUTY PLASTIC CONSTRUCTION: Our portable scale has a durable surface that's easy to clean. Place your items directly onto the plastic or place them in the expansion bowl for measuring.
Check price on Amazon

You're not going to be able to get an electric burr grinder with your budget. The cheapest, generally acceptable, burr grinder is the Capresso Infinity and it's $100.

I have this one and it's great. It looks ugly in the picture, but you can ditch the big bowl that it come with, and also the cover can be removed.

It has options for batteries (lasts a very long time, in my experience) or a plug.

The .1 gram resolution is great. The 3000g capacity model has gone up in price since I bought it. There are smaller capacities since 3000g is a bit overkill unless you want it to double as a postage scale.

I'll add that the best thing about this scale is that the auto shut off is set for 6+minutes in my experience. I had another scale that would shut off during the bloom which was really frustrating. This one stays on.

I found this one in the Wiki and it's been great. Only had it for a day though :) https://www.amazon.com/gp/product/B002SVNEWA/

It's ridiculously easy. Once you have all the stuff (and you don't need much), you can mix a batch (easier to mix a large batch than a small one) in less than 10 minutes.

Of the four I own, this is my favorite: http://www.amazon.com/gp/aw/d/B002SVNEWA/

Ones that come with an AC adapter usually stay turned on when plugged in. I have this one and it stays on if I have it plugged in. It isn't great at measuring small amounts but over 10ish grams it's good. Plus it goes up to 3 kilos.

If you are like me and are a detail-oriented person who wants to measure their food in grams to the tenth decimal place this is a good scale for that: https://smile.amazon.com/gp/product/B002SVNEWA/ref=oh_aui_search_detailpage?ie=UTF8&amp;amp;psc=1

If you want to measure grams to the hundredths though, it's going to cost a LOT of money to get a scale that accurate. Tenths is the best you can hope for.

I have this 3kg AWS one, have had it for a year or two now. Stays on for I think 3 minutes before shutoff, has a backlit screen but you can turn that off, runs forever off 4AA batteries, but also comes with a power cord if you'd rather not use batteries. I think it always stays on if plugged in.

Tough to make a recommendation without knowing your budget, and what you currently own, use, and like or dislike.

I have over a dozen coffee making devices, multiple pour overs, Aeropress, Chemex, Siphon, and a few electric machines. They all have their own plusses and minuses, and I use them all (today was a generic ceramic cone with a Melita 4 filter), but the 2 things that get used every time I make coffee are a grinder and scale.

Upgrading to a good burr grinder is almost universally acknowledged to be amongst the most useful things you can do to improve your coffee, and actually weighing your beans and water are probably a close second. My Baratza Encore does a great job, and I'm also very happy with my American Weigh Scales LB-3000.

just a gram scale that at least includes one point.I have a aws LB-3000 scale I use for it. I got it back when I started making my e-juice for my vape. https://www.amazon.com/American-Weigh-LB-3000-Compact-Removable/dp/B002SVNEWA

Has a switch to turn it off, accurate down to .1g, runs on 4 AAA batteries instead of expensive button cells, fits a large Chemex perfectly on the base, comes with an AC power adapter, and weighs up to 3kg (or oz/lbs, if that's your thing).

Can't beat the $22 price for the features and quality.

When I started my own DIY adventure in January, I ordered those very same cobalt dropper bottles on Amazon and I agree that they're complete crap. The dropper separated completely from the cap on one bottle and the dropper cap cracked on another one. So that's two lost out of twelve. Where were you when I was getting started? LOL

The AWS scale that I purchased is bigger than the one you listed, but it's very sturdy and accurate. It does come with calibration weights and a power supply so you don't have to swap batteries, but after three months I haven't had to swap yet or plug in the power supply. Also, you only need to calibrate it if you end up moving it around like I do (I don't have a dedicated space for mixing juice) or you notice that the measurement fluctuating on the display and you haven't placed anything on it yet.

ELR has been a huge help for me, probably moreso than this sub has been. It has helped me immensely in seeing what ingredients go in what recipes and I hope that one day I'll get really smart about mixing and be able to start contributing my own recipes :)

I haven't had any experience with ecigExpress thus far, but I believe they have a bigger flavor selection than anybody else. I do find that their prices are a wee bit higher than Bull City Vapor. I'll probably start buying items that are out of stock at BCV or that they don't carry. Also, BCV is located in North Carolina (I live in Virginia) so shipping is super fast for me (I placed an order with them at 9PM on Thursday and I got it on Saturday).The best thing about them is that they put their flavors in their own dripper bottles instead of just putting a cap on them like Wizard Labs does. That being said, I'll see if I can just take the dripper off and use my pipettes instead.

I first ordered my PG/VG from Wizard Labs when I started DIY, but recently switched to buying from Essential Depot on Amazon. At $11 for a quart of each, I can make around 40 30ml bottles before I need to re-up on my VG supply. The PG will last me a lot longer than that. The nicotine I bought from Wizard Labs was 120ml at 100mg VG. Looking back now I think that it was a mistake to do the VG base and will change that to PG next time I order more nicotine.

You make a very important point about shaking the flavors before adding them to a mix. It ensures that the flavor is well-combined because the contents of the bottle that it came in WILL separate if you don't use them for a while.

This appears to be the most common among the diy community...

Thanks for the recommendation of that one as I didn't notice it before and it seems to be 5.5 inches in diameter according to the amazon questions section. My only concern with it vs the LB-3000 I happened across is that the Ozeri has a resolution of 1g while the American Weigh is 0.5g. Do you find that the lower resolution is a problem at all? I'm not too sure if that will have an impact on coffee making, but if it helps I would also use the scale when cooking things that are aided by weighing (flour, eggs, etc).

There are options for the scale IIRC, imma check
Edit: NVM, it was this one https://www.amazon.ca/American-Weigh-Scales-Compact-Removable/dp/B002SVNEWA

I use a scale. This is the one I use. It's cheap, but far more accurate than the kitchen scales you'll get at Bed, Bath, and Beyond for twice the price that only round to the nearest gram or tenth of an ounce.

As far as which numbers to use, meat is a tricky one. No two cuts of meat will have the exact same grams of fat and protein, but it's not worth worrying about. If the package has nutrition info on it, I use that. If not I try to find the info from the USDA. Last resort is to look at all the options in MFP and find what the averages are and choose one of those.

No problem! Also, a 0.1g precision scale like this to measure your dose!