We found 13 Reddit comments about Pro-Tec Athletics Iliotibial Band Compression Wrap (Small-Large/Black). Here are the top ones, ranked by their Reddit score. 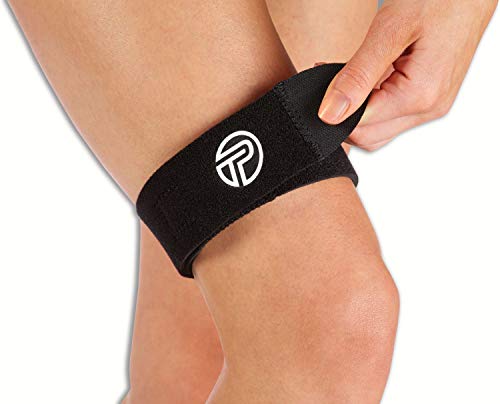 IT Band Compression pad provides targeted compression, stabilizing the Iliotibial band, thereby reducing rubbing and irritation on the femoral condyle (outside of the knee).Stays in place with textured non-slip backing.Helps reduce pain on the outside of the knee.Alleviates conditions of Iliotibial Band Syndrome.To be worn during activity to reduce strain.Made of neoprene.
Check price on Amazon

1 ) This stretch routine is great. https://youtu.be/LDhKVtkfnsg

Hey, I'm right there with you on the ITBS issue. This IT band strap from Amazon was an instant improvement. It's a band-aid to the real problem, weak hips, but at least I can run! Good luck!

Has anyone ever used one of the IT Band stabilizers? This one in particular. I ordered it already to try it. Im wondering if I should tell my physiotherapist? Some of the reviews said it made it much worse once they took it off after a run. Im scared!

Im working on strengthening and properly stretching to fully stop IT band issues, but in the meantime a girl's gotta run, ya know?

I am a beginner and I always had issues. I tried these and never looked back, they have worked wonders for me: Pro-Tec Athletics Iliotibial Band Compression Wrap (Small-Large/Black) https://www.amazon.com/dp/B000G34VV0/ref=cm_sw_r_awd_-YS.ub1X06DCG
https://www.amazon.com/dp/B000G34VV0/ref=cm_sw_r_awd_-YS.ub1X06DCG

Personally I would keep running. Get one of those compression band things or some PT tape for your runs and start doing the rehabilitation exercises.

EDIT: I have one of these which helped me carry on running while I recuperated: http://www.amazon.co.uk/Pro-Tec-Iliotibial-Band-Compression-Wrap/dp/B000G34VV0/ref=sr_1_1?ie=UTF8&amp;amp;qid=1449847013&amp;amp;sr=8-1&amp;amp;keywords=ITBS

I am going to urge you strongly to consider something besides strengthening and foam rolling. That stuff is not going to help you in the short term.

I had the exact same problem as you. It went on for a couple months and became more and more frustrating. I finally bought this:

I saw it recommended in various places and I never in a million years thought it could work. But I was desperate and finally bought one. It worked almost immediately. Your IT band pain is coming from your IT band continuously rubbing against the bones in your knee. That's why you're able to run for 3 miles or so - because the IT band will put up with that rubbing to a point, but then it becomes inflamed and you get the immediate pain. That may be a generalization but that's the gist of it.

This strap, when worn tightly above your knee, keeps that rubbing from concurring. It stabilizes your IT band around your knee, and keeps that rubbing from happening. I am skeptical of anything that seems too easy but wearing that strap was incredible. I still took it easy the first few days wearing it, but by a week I was running my same distances again. The pain didn't disappear completely but it was bearable. And day by day, week by week, the pain subsided and I could eventually lose the strap completely.

Since then I have never focused on strengthening and I use my foam roller sparingly. But my IT band pain has not come back.

I had a bout of ITBS/runner's knee earlier this season and this strap pretty much took care of it.

I also kicked up the rolling and stretching of my TFL and glutes, as well as increased my hip and core workouts, but for help during runs I started wearing this.

Has anyone had success using an IT band strap? I bought this one but it hasn't seemed to prevent pain in my IT band during running. I place the pad on the side of my leg where there's a minor indentation and make it pretty tight. It kind of just makes my lower quads sore. Any tips or suggestions on how to put it on correctly?

I am doing stretching/foam rolling as well, but I just want run without making my injury flair up!

If the pain is on the outside of the knee where the ligament running up your leg meets the bone and you feel sharp pain when bending the knee, it is likely ITBS. Might want to try a compression wrap like this.

Its about 6 months i have this issues, i haven't been on top of the exercises or done much foam rolling but when i run or hike i wear this:

I also wore it when i hiked the colorado trial last month it was great with downhill sections, also the trekking poles helped a lot. But i didn't have excruciating pain and there was no discomfort that followed the day after. Just some soreness, which is miles away from the pain that the It band gives.

Also when going downhill try landing on the forefront of your foot rather than impacting with your heel, it will help a lot.


It’s not something you want to run in all the time - but for me makes the difference between limping to the car and slowly jogging when the flare up happens.

The symptoms you describe sound exactly like when I dealt with IT Band syndrome. I would take months off at a time to rest my knee, but on my first run of no longer than a mile I could feel the pain return. I could stretch and foam roll forever, but that only seemed to treat the symptoms and not the underlying problem. I finally set out to address the real issue and for me at least I had weak hips muscles and very tight hip flexors.

Your IT band runs from your hip down the outside of you leg and knee to your foot. When my hips were weak and tight it would cause my IT band to tighten up, inflame, and scrap against the outside of my knee causing a lot of pain. I finally started doing strength exercising for my hip muscles along with stretching and I was back to running again in a few weeks. This was about 3 years ago and I've been running fine since. I still work on hip exercises a few times a week. This site has a pretty good explanation. http://www.sportsinjuryclinic.net/sport-injuries/knee-pain/iliotibial-band-syndrome

You could also look into a IT band strap to run with. I still use these on longer runs. Something like this: https://www.amazon.com/Pro-Tec-Athletics-Iliotibial-Compression-Small-Large/dp/B000G34VV0/ref=sr_1_2?ie=UTF8&amp;amp;qid=1497541609&amp;amp;sr=8-2&amp;amp;keywords=it+band