We found 32 Reddit comments about [PS4 / PS3 / PC compatible] Fighting commander. Here are the top ones, ranked by their Reddit score. 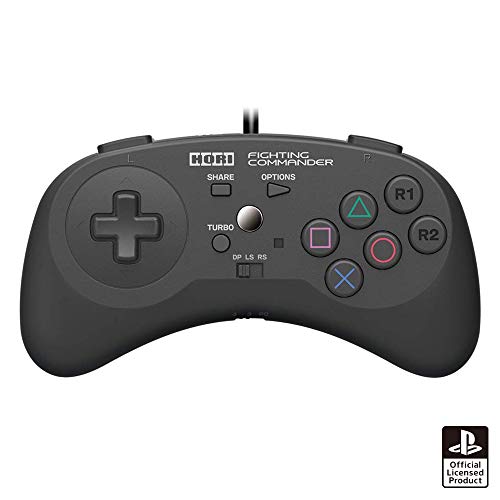 The MCZ fightpads have issues largely surrounding the DPAD.

I've heard about plenty of issues with the Hori FC4, but not so much the Hori FC for PS4. Works great for both PC and PS4 (if you play PC but want to go to tourneys on PS4). I play Zangief and the Dpad has been churned hard but still works fine (it was stiff to start with). I pulled it apart to clean once and no issues since.

Got mine about a month ago, really good. I used to run a Saturn pad through a Mayflash adapter and x360ce. Even though the purported lag through Mayflash is low, I IMMEDIATELY noticed a difference in input accuracy. It actually blew my mind because for the first month of SFV, I thought I just sucked in my input execution and had difficulty landing some combos. Turns out it was just adapter lag.

If you want to save a few dollars, you can buy it from PlayAsia (make sure it's the same exact controller because there's another one released last year that has an adjustable D-pad that sucks) for $30 plus $8 in shipping.

No this controller is pretty bad and horribly designed, I promise you will hate it. Get one of the Hori Fighting Commanders, either the one with the rotating dpad or the one without if you aren't interested in that.

I have the one without the rotating dpad and its made my inputs so clean, I can definitely vouch for it.

Ill link them both if you wanna check them out. You may be able to find them cheaper on other sites but I prefer to just use amazon.

This Fighting Commander is great too. It's symmetrical unlike the FC4 and doesn't have the rotating D-pad (which I read people saying it wears out). I've got it and its nice.

you CAN use DS4Windows http://ds4windows.com/ which is great you can set everything on the controller

http://s.pacn.ws/1500/od/fighting-commander-for-playstation-4-playstation-3-438621.2.jpg?o2oj7u the problem with this controller is that the home button doesn't work in XInput, which makes it worthless to me lol

Check this out if you want a really good fighting pad for cheap:
https://www.amazon.com/PS4-PS3-PC-compatible-Fighting-commander/dp/B017QORK8W/ref=pd_lpo_sbs_63_img_0?_encoding=UTF8&amp;amp;psc=1&amp;amp;refRID=QKHDA4JAGZM904P4AD0P

You can have a newer version for 57 euros. Here

Both of these are generally considered the best new generation fightpads.

&gt; no problem, i also played melee for about a year and then transitioned to this game, this is my first sf game. I love melee but i can honestly say i haven't looked back

buy a fight commander 4, aside the default ps4 controller imo its the best pad to play on, good features , good quality and the 6 button layout is perfect for SF games. also the controller is not TOO expensive


heres a less feature filled on, but equally good

If you want a quick lowdown on whats not on the cheaper model is, its missing the repositional d-pad as well as the dpad diagonal sensitivity adjuster (this helps for more rigid controls or looser controls for easier circular motions). The shape is also slightly different but thats not a biggy :)

No floating dpad, but it's an excellent controller and works on PS4/PS3/PC with a flip of a switch.

This is the one I just ordered last week, dat Saturn layout, I can hardly wait! Its on Amazon as Fighting Commander

here's the hori I found

I'm looking for a fightpad for the PS4. The Dualshock 4 is great, but I think six face buttons would really improve my game, as I sometimes find using the bumpers and the triggers a bit confusing.

It seems that there are two options:

The Hori has gotten great reviews and it looks amazing (my first SF experiences were on the Sega Genesis, so I love the design), but I've heard that the d-pad breaks after a short period of time. I also would have to import it from Japan, which isn't that convenient.

The Mad Catz, on the other hand, has gotten very negative reviews, but the one I'm interested in is the new improved version. The revised fightpad seems to be well received, but there's not much information about it. And many people online seem to say that everything Mad Catz does, besides the sticks, is garbage.

So, any opinions / experiences on either of these?

id go for this one as i heard that mk one has some issues https://www.amazon.com/PS4-PS3-PC-compatible-Fighting-commander/dp/B017QORK8W/ref=sr_1_3?s=videogames&amp;amp;ie=UTF8&amp;amp;qid=1480206936&amp;amp;sr=1-3&amp;amp;keywords=hori+fc4 if you can handle the price that is edit: see u posted the hori fc4 the one i linked is a bit cheaper and just as good i imagine

No stick is fine, especially for SFV, since it is very forgiving. I'm a Gief/Guile main that started on SNES/arcades, and use a pad because the 360 motions are easier for me. I've used a Hori Fighting Commander for two years now and it's held up well. It feels a little cheap (especially the shoulder buttons), but the d-pad is smooth and responsive and 360s/720s are a piece of cake. Assuming you are on PC, I think this one should work:

Maybe once every couple years, they go on sale for $19.99 at Amazon, but anything under $40 is a good price. If you've ever used a SNES or Japanese Saturn pad, it's a good choice that will be easy to get used to.

The new one has xinput support. Maybe you can return it for that?

That looks similar to this one, yet I've been told this is actually a cheaper version of fc4, with not has many features, so I'm confused now...

This one is actually cheaper than the fc4 here in Europe though.

Amazon has it: Fighting Commander

Hori Fighting Commander is the answer to your issues https://www.amazon.co.uk/Fighting-Commander-PS4-PS3-PC/dp/B017QORK8W/ref=sr_1_1?s=videogames&amp;amp;ie=UTF8&amp;amp;qid=1486075001&amp;amp;sr=1-1&amp;amp;keywords=hori+commander

There's a new version out too, I've had it for like a week and it's pretty good. I'm kinda new to street fighter and played with a xbox360 controller before, this certainly feels better.

It has the same price in all European Amazons, but here you have:

But its a reseller and also from Japan, so in the end it doesnt matter where you buy it.

Unfortunately the fighting commander 4 is the older version.

The 4 and 3 toggle on the front lets you switch from PS4 to PS3 modes, but there is no PC mode.

This is the newer one with 4/3/PC switch.

The fighting commander 4 you ordered is still good though, and Capcom has plans to support the game with X-input eventually.

In the meantime, I hear x360ce works really well.

Any controller you're comfortable with will work. Especially a console controller. I almost exclusively play fighting games. When i was using a pad it was similar to this.

Personally i use an arcade stick but that's just cause it's how i learned to play fighting games.

Same here. I use this because I heard about the d-pads and FC3 rotating after awhile.

The shoulder buttons can be very very sensitive which can work against you depending on who you are.

The d-pads and the buttons are initially very very stiff. I took to the controller like a duck to water honestly. Combos are a little easier, sometimes I find that I'm getting ahead of the inputs though.