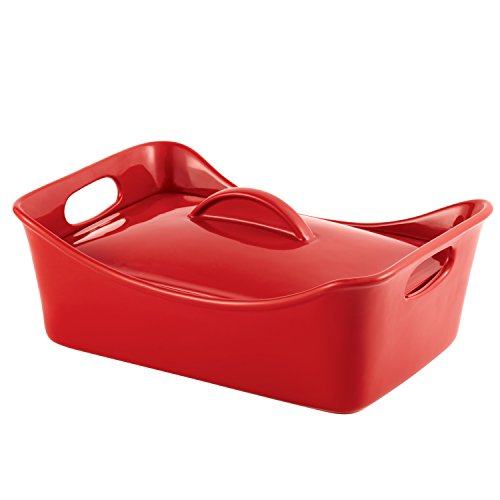 Rachael Ray Stoneware Rectangular Covered Casserole & Baking Dish, 3.5-Quart, PurpleCovered Rectangular Casserole with a bright hue, crafted from dependable stonewareThe wide handles on this casserole provide a confident grip when putting the casserole in the oven or pulling it out when food is readyNonporous stoneware surface doesn't stain when in contact with foodSafe to use in the microwave, freezer, dishwasher and oven, up to 500 degrees FahrenheitIncludes a covered casserole baking dish
Check price on Amazon

Basically, buy a ham (the precooked ones, remember that spiral sliced costs extra and is basically just pre-sliced). Put it in a roaster/whatever kind of thing you have to cook a whole ham in. Buy a bottle of Korean BBQ sauce (Aldi's is actually quite good). I like to add some extra stuff...pomegranate liqueur is tasty but expensive, but I found a bottle of Torano pomegranate syrup that added pretty much the same flavor. Maybe some orange ginger stir fry sauce...I dunno. Whatever I had sitting around in the fridge.

Pour the BBQ sauce over the ham, follow the cooking directions put it in the oven on say 300 degrees and baste every half hour. Voila! Korean BBQ ham.

I will say that the best lasagna pan I've found is this Rachael Ray casserole dish, because I wanted something with a lid you could use in the oven. It cleans up really nicely. I actually did the last ham in there because it was a small one. I also had a hell of a time finding a large roasting pan and finally found a huge one at Bed Bath and Beyond a few years ago...I don't see it on their website, though.

For baking, though, I find the old stuff usually works better, too.