We found 5 Reddit comments about Rainbow Light Women's One Multivitamin - 90 Tab. Here are the top ones, ranked by their Reddit score. 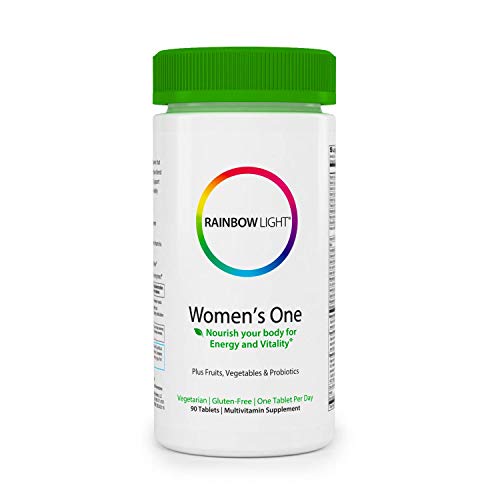 WOMEN’S HEALTH: This high potency once daily multivitamin includes a 90 count supply, and provides the essential vitamins, minerals and antioxidants to meet the nutritional needs of womenCUSTOMIZED NUTRITIONAL SUPPORT: Packed with scientifically studied vitamins and minerals to nourish, energize, and fuel female vitality at the cellular levelWHOLE-BODY HEALTH: Promotes full-body wellness and a vibrant healthy lifestyle with potent B-vitamins, choline, antioxidant vitamin C and E, plus vitamin D that promote natural energy and supports bone, breast, immune and nervous system healthDIGESTIVE BALANCE: Vegetarian and gluten free, these multivitamins contain a Digestive Support Blend and plant-sourced enzymes and are gentle enough to be taken on an empty stomachPURITY SAFEGUARD: The formula is made with purity-tested ingredients and NO artificial preservatives, colors, flavors or sweeteners. Contains NO gluten, wheat, milk, tree nuts, peanuts, eggs, fish or shellfish
Check price on Amazon

Ah hara hachi bu haha! That literally means stomach 80%. I forgot about that, should've mentioned it! It's very true that in Japan, we eat until we're not hungry, instead of eating until we're full. In fact, my sister and I even communicate how hungry we are based on that. So 80% is perfectly happy and satisfied. 85% is feeling slightly sick from eating too much. 90% is feeling physical pain from eating too much. 95% is feeling like we're going to puke because we're so full. And hungry is like... 60%. 70% is we could eat, but we wouldn't eat much at all.

That's so interesting how you bring up how stomach expansion occurs from high volume, low calorie foods like vegetables... I'm guessing you also watch My 600 lb Life and it's a common thing for the gastric bypass surgery patients to be told to NOT eat vegetables because it undoes the surgery by expanding the stomach again. That hasn't really happened to me or my family though, probably because we weren't binge eaters to begin with? I think those powerful binge urges and hunger signals come from unhealthy mental attitudes about food too, which we never really had. So that's why I feel often that I don't really belong here because my relationship to food and weight is purely a control thing for other mental fucked up things about me and I'm very rational about food and weight without it consuming my life.

I am aware of how many calories are in the things I consume, but I don't obsess over them. I do, however, pay strict attention to how much protein I eat each day and I make sure to stay on top of my multivitamin, biotin, and calcium supplements. My priority is to keep in relative good health (no real health problems yet thanks to my diligence) while staying in my 80-85 pound weight range for my own sanity.

Let's see... Every single day, I eat at least two Chobani Greek yoghurts. Currently, I hoarded the coconut flavor. So that's 150 calories and 12g protein each. That brings my absolute minimum total to 300 calories and 24g protein. But I require myself to eat 36g protein daily. So I make a sandwich! I include mustard and spinach too, but they have negligible calories and grams of protein so I didn't include them.

And honestly, that's how the past several weeks have been for me. Two yoghurts and my sandwich, plus my multivitamin, biotin, and calcium. I also drink at least half a gallon of plain green tea every single day. I have since sixth grade. No milk, no sugar. Just the standard daily sencha I grew up with. On occasion, I drink Coke Zero. But nothing else.

So my total calories and protein each day comes out to 591 calories, 44g protein. I don't really eat anything else at all.

I don't get hungry honestly. I think the last time I was hungry was months ago. Somehow, I don't feel hunger impulses. But I force myself to eat my yoghurts and sandwich to make sure I get my protein and avoid health problems. I don't eat at mealtimes at all. I don't have a set time to eat whatsoever. In fact, it's 4:30 AM here and I ate my sandwich at 1 PM yesterday and my yoghurts at 2 AM not too long ago. My eating is really unscheduled. And I don't plan out what to eat either, not really. I have my routine of my yoghurts and sandwich down, and I don't plan anything else. If anything, I plan what foods I will buy and eat to keep my weight up. I feel guilty for spending money on food and I research a lot into how many calories I can buy for as little money as possible. When I see I hit 79 pounds, I make a conscious effort that day to buy food to regain at least a pound. I have planned and budged for buying all sorts of food, but it's still hard for me because of the guilt of spending money and not being able to eat so much in a short time. My disordered thoughts about food isn't about weight loss but more about self-worth haha.

I do try and snack when I'm not hungry, but again, I'm not compelled to lose more weight. I want to stay in my safety zone of 80-85 pounds. And I hit 79 pounds pretty often, so I try really hard to go back up to where I want to be. I find it difficult to snack though because I get full very quickly and I feel a bit ill when I push myself and eat too much. So I end up rarely snacking, even when I should.

I don't have any off limit foods. I don't fear food and I don't get panic attacks over food or anything. I do, however, dislike foods like anyone does haha. I hate mayonnaise. I dislike sugary foods in general. I'm also paranoid about the health of my teeth and gums, so I avoid soda almost entirely. I'll gladly take diet soda!

My food preferences just tend to line up with foods that are lower calorie. As a kid, I always liked sour candies you see and I strongly disliked sugary candies like chocolate. So that meant that I would snack as a child on candies with very little fat and thus fewer calories. I generally disliked eating starches too. I ate much more meat and fish than rice and noodles, much to my parents' amusement. So that meant that I was probably in a mild state of ketosis, which meant less hunger signals, so I ate less in general. I never grew up on juice or soda. I was and am a tea drinker with no sugar or milk added, so that's zero calories too. And deep fried food was a rare occasion, maybe once a month? We usually ate homecooked meals, using little oil in the pan too. It shocks me how much oil people use on cooking shows. It's so fascinating looking back and seeing how all these preferences ended up to keeping a caloric deficit from day to day. I didn't realize it at the time of course.

In fact, in high school, I once had an argument with a classmate that I was naturally thin because of my genetics LOL. I even said I couldn't gain weight and if I tried to eat more, I'd lose more weight. I cringe at myself, ugh. I didn't know any better. I only learned about calories in college. The thing is, most people don't know how calories work or how weight is something people have absolute control over. They don't see food as calories, just things that taste good. And for some people like me, the things that taste good happen to have less calories so even though we think we can't gain weight, it's just that our habits make it so we don't gain weight.

Back then, I would eat two pounds of fish and chips my dad would fry and probably have like a 2000 calorie intake for that day. But my sedentary TDEE was 1200 calories, so my caloric surplus was only 800 calories. And eating 1000 calories each day, within four days, I would've lost all the weight I would've gained from that massive caloric intake day, so I was never higher than a BMI 16 even when I had no idea what on earth I was doing.

Nowadays, I use calories to exercise control over my life and I assure you that the law of 3500 calories equalling one pound of real weight, either lost or gained, is absolutely right. In fact, that's why I'm able to manage my anxiety over special events with lots of food. I know that within a week, I will have lost any weight I gained from a wedding or whatnot, even if I don't know the calories in the filet mignon with butter sauce. I know for a fact that even if what I ate was 4000 calories, within a week, I'll be back where I started. That logic of calories brings me so much peace and mental stability despite everything else wrong in my head. :D

You can buy it at health food stores but it's WAY cheaper on Amazon so that's where I buy it. It was recommended by a naturopathic MD when I went to see her about my tonsils having insane swelling. The chest pain stopping was a totally random side effect of starting the vitamins but I'm so glad I did.


The pills are kind of big and they basically smell like hay, but if you can't swallow them you can always dissolve them in something or blend them into a smoothie. I discovered that after I had my tonsils taken out.


Here's the one I take - they also sell men's, prenatal, and senior vitamins. I got my mom on the senior one and she feels way better.

I take this everyday with food

I also take a Vitamin D/Calcium supplement for hip growth and a B complex 2x a day to counteract the B12 deficiency caused by cyproterone acetate.

IMO it's better to be safe than sorry, because the body is much better at dealing with too much of something than not enough. (but pay attention to the maximum recommended daily allowances)

Make sure you take them with food though, because that usually increases bio-availability.

Rainbow one a day. It's available on amazon http://www.amazon.com/gp/aw/d/B000EEBWIG. There's also a men's version.

i take a multi - before i started even losing any weight my doc recommended i try to find one with vitamin D and iron. i've taken the rainbow one women's multi for a couple years now - it doesn't upset my stomach and i have no complaints. no idea if it's effective or not but i continue.

i supplement my fiber - i've tried a half dozen different varieties and settled on this powder. it doesn't taste great but it works and it's easier for me to down a little glass than pop 6 capsules, etc.

i also take biotin - i have always had fine hair but around 70lbs down, found it was thinning significantly. my protein and fat macros were still looking good, and my multi is almost equivalent to a lot of prenatals, but i added in this biotin. i've been taking it for about 6 months and have noticed a definite uptick in new hair growth; although i have also been maintaining for about the last 6 months so i can't say for sure it's the biotin.

i eat protein bars quite a bit as well, although i typically have them as lunch instead of in a supplement role. i've tried most flavors from b-up, one, muscle pharm, quest and more, and my favorites are quest's apple pie flavor and muscle pharm's cinnamon combat crunch bar.