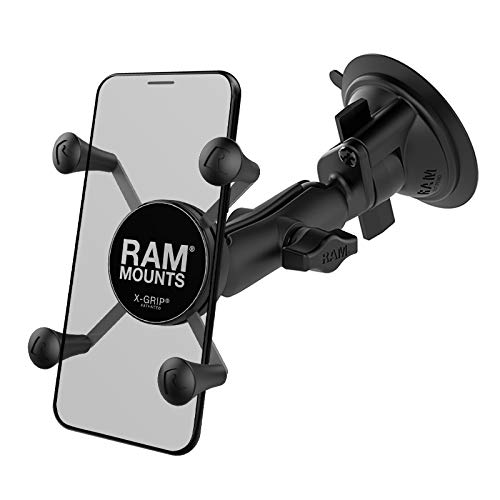 The RAM X-Grip is what I use. Absolutely love it. It's also great that RAM makes their mounts modular, so if you get a different phone in the future that won't work with it, you can use the same suction cup and arm and just buy a different holster piece.

I use the Ram Mount Universal X-Grip with mixed results. If you're looking to do the same, buy the Large version.

I've had good luck with this Ram mount and mounting directly to the inside of the windshield.

I've had 2 of these for 3 years now and love them. Fit almost any phone in any case, has never once become unsuctioned from the windshield or lost grip on phone. Ram Mount Twist Lock

This size SHOULD (but measure first) fit an S8+ with neo hybrid. It fits my regular S8 with that same case no problem

While this is maybe not a fun or exciting gift, I highly recommend that if she does not already have a phone mount for her car that you get her one, especially if she'll be using her phone as a GPS. I went through four of them before getting the Ram Mount X Grip and I haven't needed a new one since. Its a bit pricey at $50, but its seriously the best car mount I have ever had. The others all either had sticky stuff that melted in the Texas heat or plastic gears that just sheared and broke or just springs that didn't maintain tension. This one is fantastic.

For normal driving, I use this. I’ve used this for several years now, and it’s held up perfectly. If you want something sturdier, ram mounts are the way to go. I use this on off road trails without any issues, so street/highway driving won’t be a problem.

I use the RAM X mount. Mine is solidly mounted to the side of the console down low by the shifter. That way I can easily touch the screen with my hand still on the stick. Here is their suction cup mount that can be mounted to the small side window if you prefer it up high. https://www.amazon.com/Suction-Universal-X-Grip-Holder-RAM-B-166-UN7U/dp/B0066BWMNU

It's not the cheapest mounting option, but the RAM Universal-X-Grip mount works great for Stratux in cases that are similar to this /u/helno case. The arms are spring loaded and padded, and work well to hold a variety of items. I already had one, but just this weekend realized that it would work really well for Stratux!

Get a RAM mount. It can be bolted to the pillar so your phone can stay mounted and secure through the bumpiest of bumps.

RAM Mount X grip is what i use on my motorcycle and had in my last Jeep. The ball mount can be bought as a suction cup, sticky (like a gopro mount) or you can get the bolt size you need to secure it to the pillar.

Edit: Forgot to say that it has been secured on my motorcycle through two 50-60mph crashes. Phone stayed in place even after the tumble. Very low chance of falling off with the doors off.

It should be noted that a) RAM stuff is awesome, and b) RAM stuff is modular; the X-Grip is just the phone holding end of a mount and you'll need additional parts to get a full car mount. I use this car mount kit, which has a suction cup, 3" (I think) arm, and X-Grip. I supplemented mine with a 6" arm and another ball joint, which give me a lot of flexibility in positioning my phone.

I like RAM Mounts. They are very strong(I had 2 on my motorcycle for ipod and gps) and they sell them at Car Toys, or from rammounts.com or here on Amazon

My girlfriend and I are going on a trip this weekend and will be getting back on Tuesday night. We're taking her car because I'm trying to preserve miles on mine now, but I bought this mount and will be testing it during the drive. The mount has mixed reviews on Amazon, but I looked it up on Reddit and found much better reviews.

Redditors were also suggesting this list, but most of them are mounts that stick into your CD player and, with me looking at my phone more often for my speed, I want my phone to be closer than my CD player.

Several redditors were also recommending this one the most, but that price tag is iffy to me.

I have three of these and love them. It holds my phone off road, and i feel confident with it there even with the doors off.

Not sure if you want to mount to the windshield or not, but I've had this RAM xgrip mount for 4 years, and been using it in my cx-3 since I bought it. It's fallen off maybe a couple times, but it's crazy steady when driving.

This is hands down the king of mounts.

Also not cheap I use the Ram Mount X-Grip: https://smile.amazon.com/dp/B0066BWMNU/ref=cm_sw_r_cp_awdb_t1_dtMwCbFD2QK3H

me too!
Get this, works with any phone:

sturdy as shit, I use it off roading in my xterra and it's never come undone or anything.

Having gone thru many phone mounts, I found one that never falls off, even in this stupid Texas humidity. Spend the $ and get this RAM mount. It is worth the money. I also got the weather tech floormats. I used to live on a gravel drive way and it was well worth it. Now that I live in the city, they are still really nice. The factory trunk liner is worth it as well. Keeps stuff from sliding around.

Only other accessory I got was a V1 with the remote display. The remote display fits perfectly next to the start button, and the cables can be hidden easily using the power supply in the glove box.

I use a RAM suction cup mount with an X-Grip. https://www.amazon.com/Ram-Mount-Suction-Universal-X-Grip/dp/B0066BWMNU

So if I have my phone mounted in something like https://www.amazon.com/gp/product/B0066BWMNU ... while its doing GPS things ... could I see a ticket, I wonder.