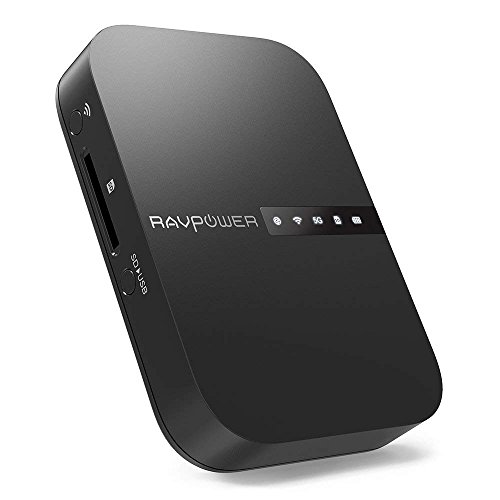 [Wireless Data Transfer and Backup Anywhere] Connect SD cards, portable hard drive, SSD wirelessly to your devices (Phone, iPad, iPad Pro, Tablet, Laptop) for not only stream music, photos, videos, browse documents but also transfer files mutually between SD Card, SSD/HDD and your device.(Must hold the power button for 5s until wifi LED light on to turn on filehub)[AC750 Wireless Travel Router]]Portable Wifi Touter for Travel, Upgraded with 300Mbps Wi-Fi speed on 2.4GHz band and up to 433 Mbps on 5GHz. Instantly convert a wired network to private and share Internet access with multiple Wi-Fi devices via AP Mode/Router Mode/Bridge(Not Support VPN )Note:We have updated micro B Port to USB-C Port in order to charge the filehub better[One Key Backup] Upload your SD card-stored photos or video to your hard disk or flash drive easily with 12-18 MB/s on Data Transfer Speed without computer. (Must hold the power button for 5s until wifi LED light on to turn on filehub)[Media Share & Personal Cloud] Seamlessly share with your families, friends and stream your videos, photos, and music on your connected smartphones, tablets, TVs, media players, Chromecast, Roku, and other DLNA devices, via App or Web.(5 device allowed)[Wireless Free Up Your Devices' Storage] Automatically back up your latest photos and videos to attached SD Card or HDD directly through our RAVPower FileHub via in-app camera. (Please make sure you have connect the wifi of RP-WD009 in 10 metres)
Check price on Amazon

I used to love my WD Passport, until it died. Realized I was better off with something that let me use whatever storage media I wanted. Best of all, this thing lets me one-button back up the SD card to attached USB storage. With a low-profile 256gb thumb drive (eg) permanently slotted into the USB port, the whole thing becomes a shockproof (kinda) waterproof one-touch backup system.

Not a phone, but Ty Hurd recommends this portable hotspot.

Yeah I saw that. Even last year the first model was expensive. I went with the ravpower route during my last trip: sd to ssd backup (see below). Was hoping to find a way to do direct backup instead of carrying the RAVpower around.

I’ve been playing with the idea of backing to my mini iPad but it’s generally not enough space as I only have 64gigs. I can use 600gigs on a week long trip

Hey, I was wondering the same thing. To be honest, the methodi found isn’t really cheaper than just buying a bunch of micro Sd cards, it only becomes a good deal after a terabyte or so.

Buy this: https://www.amazon.com/dp/B07P5QDQ1B/
And an SSD or hard drive, you have an easy one click solution to transfer footage.

It's true that larger SSDs will get higher benchmark scores but I doubt you'd notice the difference in everyday usage.

As long as you don't run low on space 128GB will be fine.

While 2230 drives are not common now I think there will be more on the market with quasi upgradeable Surfaces' and other devices using them.

In addition, you can get personal wireless storage devices also.

Wireless hub, use with other storage devices or SD cards
https://www.amazon.com/RAVPower-FileHub-Wireless-Portable-Transfer/dp/B07P5QDQ1B

Buy purpose built SD card/HD readers. They have devices for this purpose that have their own power and can connect directly to/power an SSD drive.

You want a travel router. Do this all the time in hotels. Here’s one that doubles as a backup battery so one less thing to carry while traveling.

I got a 64GB iPad Pro 11 around Memorial day (there was a sale on it for like $650). Having had it now for about 3 months now, I haven't run into storage issues yet. I do have PUBG installed, but not Fortnight or GTA.

I do have a terabyte external SSD and a RAVPower Wifi Hub which allows iPad access to the external 1TB via wifi and app even on iOS12.

I think at the 64GB storage level, iPad Pro becomes more like a chromebook than a laptop replacement - an access device for cloud services like Dropbox or googleDrive. On the other hand, I've had laptops with 1TB of storage - and still you run out of space and have to rely on external storage. I think the question with internal storage is when that happens - more storage you have, later that happens, but it does happen to everyone at some point.

On a typical family trip, we take an ancient GoPro 4 Silver, 4 iPhones, and a Sony NEX6 - the dedicated cameras being old devices that don't take 4K videos or high megapixel photos, and still end up with about 80-100gigs of phots and video footage. If speed/reliability of getting FilmicPro footage out of iPhones into a PC via iTunes is any indication, iPad Pro doesn't seem like a good device to aggregate these photos, regardless of internal storage.

IMO, the cost difference for additional internal storage (and LTE connectivity) on the iPad pro is better spent on the Pencil, a nice keyboard and cloud/external storage. Office365 comes with a terabyte of OneDrive storage if I recall correctly - that seems sufficient. I guess the minimum amount of internal storage depends on how one uses the iPad (and it may very well be 256, not 64GB for you), but I personally don't go on a ton of flights (and sleep mostly when I do, or watch in-flight entertainment), mostly review PDFs and use GoodNotes for some note taking - for these uses, for me, 64GB has been enough.

Our staterooms were rather close and we used one of these to split a single internet package across 4 of us (in two staterooms). This allowed us to use WhatsApp when we were in our staterooms. Funny enough this was also on Enchantment.

Enchantment doesn't support in-app messaging via the Royal app. I didn't do much testing but I would be surprised if much else worked before paying. I did not receive anything while unauthed on their Network (no push notifications, no nothing). One thing worth noting is that device switching is easy (username and pin).

I would buy one of the devices I listed and one internet package per stateroom. Make the SSID and password the same for all of them, and carry them around the ship in your bags. Eventually someone will connect to one of these devices and the chat will stay up to date..

I reported this bug to Apple through the feedback app a few days ago. Please do the same.

In the meantime, I've been using a device to backup my SD cards to a flash drive, and the iPad can read/write from that flash drive. You can find discount codes to take like.. $15 off.

Not convenient, but if you'd like to have a way to test iOS 13, this may give you an option. It's not worth the cost for solely importing RAW images and videos, but it's also a travel router and helps me backup my SD cards on the go.

Something I did not even know existed was OTG storage, like this. Depending on the phone you use, there is likely a storage option available for you, and they've gotten real affordable.

Also, another weird option is an external battery WiFi storage, like this.

No doubt SD cards are more convenient, but these were workarounds I used to get me through the limitations of the phones I went with.

Have a good one!

in this case I don't understand how would I benefit from a SSD if the transfer rated of the filehub are extremly slow?

I use a Ravpower filehub. I have an older version but the newest seems to be this. In short, you put an SD card in and plug in a USB HDD or SSD, and then connect to the Ravpower with wifi and choose which files/folders to copy to the USB using the app. I used this extensively on travels without a laptop and it worked brilliantly.

There are a couple of ways you can go... I think the best option for me has been using a filehub like the Ravpower Filehub. That allows me to connect either SD cards or an external hard drive. It will also give you more freedom on where to place the files. I can chose the camera roll or an actual file.

Put some thought into how you eventually want to organize your photos. I also have a lot of photos and am moving to an all mobile work flow. The IPad photos app sucks for organization IMO. What I eventually went with is keeping all my archive files in my Amazon photos cloud account. My current workflow is to review the files on the filehub before uploading and do an initial cull. Then I upload only the ones I intend to edit to the IPAD. I edit the files and upload the edited files to my Icloud albums and then delete all the files off my Ipad. My Ipad only has photos I am actively editing on it... I keep my raw files on portable hard drive and my finished work on my Icloud.

At home, I'm able to change the SSIDs independently of each other on my Comcast xfinity rental modem. When I'm on the road or out with friends, I cannot rely on them to have something like this. I also can't always depend on internet so, I've got this and I can wirelessly bridge to their wifi or the Hotspot on my phone, but I can essentially drop a wifi network in an open field if the need presents itself and be able to cast to a phone or connect to the internet via lte Hotspot on my phone, it's a pretty cool device and has an SD card slot for storing and steering movies direct to the Quest.

It sounds like you'll be able to do this with a hub with iPadOS. I've been doing that the last few years with my iPad Pro's using a RAVPower FileHub -

If you want to throw some money at the problem you could buy a travel router that you connect to your school’s wifi and then you connect your car to it. They are made to be used in hotel rooms where you have to login via a webpage. I bought this one and used it over the summer when we rented a cottage with a poor wifi signal to the main house:

External hard drive paired with a Filehub. It has it's own wifi signal so internet is not strictly necessary.