We found 4 Reddit comments about Reefer Madness: Sex, Drugs, and Cheap Labor in the American Black Market. Here are the top ones, ranked by their Reddit score. 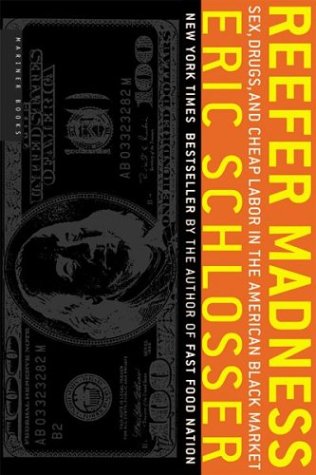 Edit: Had to remove some ambiguities.

There's apparently no evidence that they knew of the effects of smoking pot. I tried to trace down this quote:

"Some of my finest hours have been spent on my back veranda,
smoking hemp and observing as far as my eye can see."

Reefer Madness: Sex, Drugs, and Cheap Labor in the American Black Market is probably the best book on understanding why MJ is illegal, while things like alcohol are legal.

"Eric Schlosser (author of Fast Food Nation) returns with an exposé about the black market in the United States in Reefer Madness. He details three areas of the underground economy: marijuana, pornography, and illegal immigrant labor. He charts the growth of these industries as part of the country's economy and the hypocrisy of those who rail against these industries and yet spend their money within them. He refers to marijuana and pornography as "two commodities that Americans publicly abhor, privately adore and buy in astonishing amounts." Salon.com says, "Reefer Madness is more of a guided cultural tour, by turns infuriating, depressing and weirdly entertaining, than a polemic."

The book Reefer Madness Has an entire third of it about farming strawberries. Without people to do the work for next to nothing, Strawberries would cost $20.00 a pound.