Reddit reviews Remembering Traditional Hanzi: Book 1, How Not to Forget the Meaning and Writing of Chinese Characters

We found 14 Reddit comments about Remembering Traditional Hanzi: Book 1, How Not to Forget the Meaning and Writing of Chinese Characters. Here are the top ones, ranked by their Reddit score. 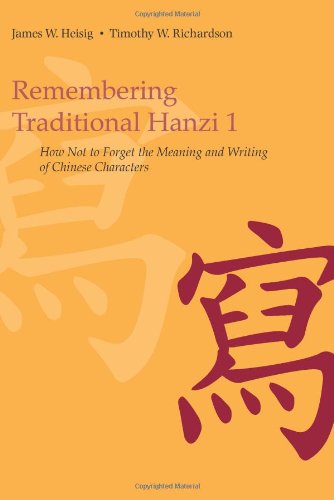 14 Reddit comments about Remembering Traditional Hanzi: Book 1, How Not to Forget the Meaning and Writing of Chinese Characters:

To learn them. For Japanese, this is great and widely considered one of the best ways to learn the kanji (and some vocab along the way); for Chinese, this (Traditional) and this (Simplified) are two of your options. Another is to just learn them out of whichever textbook you get and while studying vocabulary separatedly. There are probably some other hanzi books too; you might wanna have a look over in /r/chineselanguage for that sort of thing.

However, I suggest getting a good base in one of the two character sets (Japanese or Chinese) before you start with the other, to minimise any confusion. I knew probably 1.3k kanji (as in, I could recognise them and sort of figure out the meaning; I couldn't pronounce all of them) when I tried learning Chinese as well, so I didn't have any problems with that.

Personally, I went a different route characters-wise. I learned the meaning and writing of 3000 characters first, and now I'm learning the rest of the language on that foundation.

It was definitely right for me, but it may not be right for you.

The same applies to traditional characters, and this is the book by Heisig. It's a great book and I highly recommend using it in conjunction with Anki (the book contains an excerpt on how to make flash cards on them: read this before actually learning any of the characters in the book).

My preferred method of using Anki is based on All Japanese All the Time which is largely based on Antimoon: in short, the idea is to write out sentences in Pinyin on the Q: side of your flashcard, and then write out the sentence in Chinese characters on the answer side (along with any hints you may need). Avoid English as much as possible on either side of the cards. Every time you see a Q:, try to write out the characters (at least in your mind). Seeing proper Chinese sentences is important for you to get an intuitive grasp of the language. Never try to convert from English to Chinese -- it's counter-productive and reinforces your bad Chinese before it gets any good.

But remember that knowing all the grammar and vocab in the world isn't going to make you a fluent speaker. You need to listen to Chinese, speak Chinese, and think in Chinese. Memorization will only take you so far (and it's mostly just for reading's sake).

Edit: If you're serious about this, you're going to want good pronunciation. That needs to be learned before you learn a lot of Chinese -- otherwise your bad pronunciation habits will be nigh impossible to break. Hopefully you have a book with recordings that drills this into you. Wikipedia's Pinyin page has some descriptions and IPA for the sounds, but you'll want a better guide that explains tongue positions. And you'll want a Chinese person to verify you're doing okay at first.

Tones are not optional! They are not separate from pronunciation -- they ARE PART OF pronunciation! It's amazing how many westerners are arrogant about this point and just don't learn tones properly. It's like learning English without every pronouncing the letter S.

I started with this. No regrets choosing this as my starting point. Would recommend.

I would recommend Remembering the Hanzi. It doesn't teach you the word in Chinese but the method helps you absorb and learn to write the most common 1,500 characters in Chinese. This method helped me learn to do some basic reading and is a good complement to Chinese studies. This site seems to have a copy of it. Not sure if this site works but its worth a shot.

Well 정보은씨?, you are in luck.
One possible solution for you is to grab a copy of the Remembering Traditional Hanzi series by Heisig and study the "meanings" of the characters. I would also recommend using something like Anki or Skritter that make use of Spaced Repetition Schedule for better retention rate.
I recommend learning the traditional characters because both some Chinese speaking world and Korea use the traditional set of characters. The mainland China uses the simplified characters and if you want to make the transition to the simplified characters, I heard it's not that hard.
As you are learning the characters, you can manually input the Korean way of reading the characters or rely on the Korean readings that Skritter provides.

If you work consistently, I think the above step should be done in a matter of months. Then, you have given yourself a strong foundation in characters.

I would also suggest perfecting your Mandarin pronunciation as you are learning the characters.

Just wanted to add in that if you went with Heisig's method, it wouldn't have to be rewritten for Chinese. He's made books for that as well (for both traditional and simplified.)

Heisig is a pretty good book if you only want to learn characters and he has a simplified and traditional version.

Since we're talking about language learning, I wanna plug the Pleco app. The dictionary is priceless. The paid add-ons are worth their weight in gold. Also has Cantonese support. Amazing app. Truly.

If you think characters are daunting, check out remembering the hanzi which is made by someone who learned Japanese as a second language and came up with a way to memorize the characters and stroke orders with minimal effort. He made the same system work for Chinese and well.

It's not the 214 Kanxi radicals per-se, but for my first 1500 characters I used method in the book Remembering Traditional Hanzi. There's also a Simplified version of the book. I find this method makes it really easy to memorize characters (well enough to write them), but actually one of the biggest benefits of the book I found was the order in which the characters are presented, making them even easier to remember.

Beyond that, if you really just want to memorize the 214 Kanxi radicals, I'd recommend using SRS flashcards like Mnemosyne or Anki. You can use these to memorize anything. Before I moved to Taiwan for instance, I compiled a list of all of the street names in all of Taipei and used Mnemosyne flashcards to memorize them all. It was unbelievably useful to make it easier to remember addresses and to speak to Taxi drivers while I was there.

There are lots of flashcard decks for the Kangxi radicals. Here's one I found with a very quick Google search. I'm sure there are others. Good luck!

I have always used the Chinese Link textbooks. I also see Integrated Chinese everywhere. Also, I highly highly highly recommend all of the Demystified books! I have both the Chinese and German and they are fantastic! Also Heisig's books are really popular and they also come in traditional. Hope this helps! I am pretty experienced in trying out tons of different resources for Mandarin! :)

I would recommend using Remembering the Hanzi, but tweaking the method so you're not using English keywords.

Once you learn how to write all the common hanzi by this method, you'll be in a position to simply drill recognition and production for a large variety of sentences, while tracking your progress by trying to read Internet articles, write letters to people, or whatever else catches your attention.