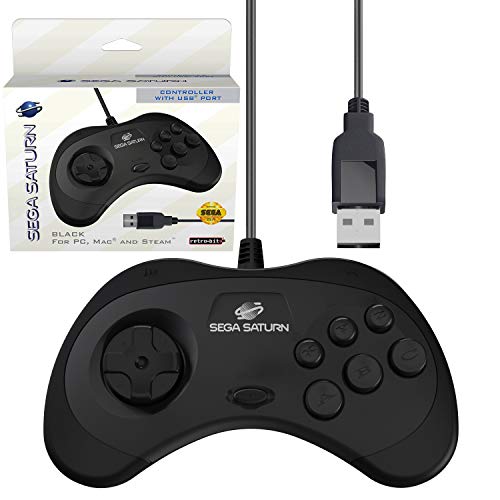 These are PC controllers with D input &amp; X input toggle, so you would need a verified working adapter if you want to use on PS4.

Something like these adapters, while the controller is in X input mode, might work (not verified) for PS4.

Or you can stop torturing yourself, get an arcade stick / fightstick with Sanwa JLF and modify it.

There's already a lot of replies, but having used this in SC and Tekken, I agree that it is pretty nice. Much better in SC than in Tekken though, as the dpad is pretty restrictive, making Korean back dashes and quick neutral inputs difficult. The face buttons are fine but the shoulder buttons feel flimsy. Overall very comfortable to hold.

I'm waiting for the PowerA Fusion fightpad because it looks to have a much better dpad. There's also the Sega Saturn pad which also has the better dpad. Definitely consider those instead if you want to use it for more than just SC.

When did you buy your Saturn controller? The first one I picked up, I immediately returned. I bought the USB Saturn controller at the same time as I did the 8-button blue USB Genesis controller. Neither was satisfactory compared against the original hardware. The buttons were too stiff, and the D-pads lacked the fulcrum that facilitates movement for firing hadokens in SFII.

However, Retro-Bit has two different Saturn controllers. The old version had the less-than-satisfactory D-pad (the "Model 1"), so Retro-Bit did a laudable thing—especially for a 3rd party peripheral manufacturer—and issued an updated controller (the "Model 2"). As an American, I'm a bit annoyed that they chose to name the revisions in that fashion, since in my mind the Model 1 and Model 2 name designations refer to the Western and Japanese Saturn controllers, respectively. Either way, I'm happy they revised the D-pad; now I just have to pick up a Retro-Bit Model 2 and test against my original Saturn controllers.