We found 5 Reddit comments about Rivers of London. Here are the top ones, ranked by their Reddit score. 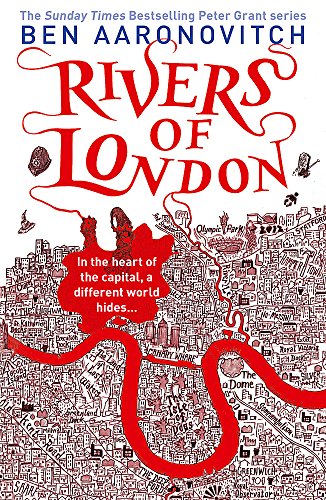 There's a book series I read, the Rivers of London series by Ben Aaranovich and the lead character, DC Grant, is a black copper. (Also, slightly a wizard).

And there's a thing that happens in them, which is that often when Grant meets someone he'll say if they're white or not. So I'll be reading merrily along and run into a line like

&gt; She was a white, middle-aged woman who looked like she was already losing her patience

And for a while that was really jarring.

I'd literally stop reading to think "Why the fuck would you bother to mention that she's white?"

...And after a while, I realised that Grant mentions that she's white because he's a black guy. It makes sense he'd notice that sort of thing, when I personally wouldn't bother to describe a white woman as white - I tend to see people as white by default to the extent I'd forgotten that DC Grant was a black character with a different worldview to mine. That was a pretty valuable discovery for me, if I'm honest, because at least now I know I'm prone to think like that.

And I suspect that something similar might be happening when people listen to the descriptions of inclusive characters in TAZ.

It's very easy (assuming that you're more or less straight, white and cisgendered) to kind of forget that some people aren't the same as you. Not in a malicious way (or at least not necessarily in a malicious way), but if you happen to inhabit the same cultural space as most portrayals of "what people are like", being reminded that a character is outside those parameters can feel jarring.

It's a good jarring, if you ask me - it makes as much sense to say "But why is Merle a dwarf though?" as it is to complain that so-and-so isn't cisgendered, but people are conditioned to expect dwarves in the context of a fantasy narrative, and they're not (so) conditioned to expect LGBTQ or ethnic variations to be represented in a fantasy narrative or in the media generally.

Honestly the way the McElroys do it, as an aspect of a character rather than the central focus, is probably the best way to fix that lack of representation. I don't think people find it jarring out of malice, just because they're not used to it - but having that representation is how people get used to it. And for those demographics that are traditionally underrepresented, getting to that point is huge.

Rivers of London by Ben Aaranovitch! The lead is a Met Police officer who becomes involved in the supernatural wing of the force. It's set in contemporary London and the atmosphere and London scenes are incredibly vivid.

Well in that case you definitely need to read the Discworld series, has a lot of the same sort of humour. I'd reccomend starting with Guards! Guards!, it's the first book in the City Watch arc. Here's a guide to how to read the Discworld books, it's a bit chaotic I know but it's well worth it.

Whilst it's a lot less comedy I'd also reccomend the Rivers of London by Ben Aaronovitch.

Sure, I generally listen to fantasy style books so it might not be to everyone's taste. If so try /r/fantasy for some great threads of lists of audio books if your interested.

I listen to Terry Pratchett books (plenty of info on where to start with these on the web but I always recommend the guards books ) when I'm walking or jogging because when I start laughing it doesn't mess me up as much. Sometimes Ill slip in an "Iron Druid Chronicles" book by Kevin Hearne these are still light enough to let you enjoy your surroundings and are great for outdoors stuff because there is lots of nature waffle :D

for running I try to stick with something that draws me in like the Dresden files by Jim Butcher. or anything by Brandon Sanderson his stuff tends to jump character perspectives from one chapter to another so you find you run through a chapter to get back to find out what happens. Well I do anyway.

I listen to a large spectrum of stuff really but my core library is Fantasy so here is a list I prepared for a friend earlier in the year Hope it helps:

Rivers of London by Ben Aaronovitch. A light and bouncy entertaining urban fantasy that has a great first-person protagonist.