Reddit reviews Sale of the Century: Russia's Wild Ride from Communism to Capitalism

We found 4 Reddit comments about Sale of the Century: Russia's Wild Ride from Communism to Capitalism. Here are the top ones, ranked by their Reddit score. 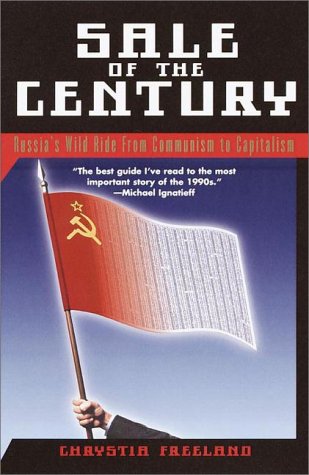 4 Reddit comments about Sale of the Century: Russia's Wild Ride from Communism to Capitalism:

&gt; Sounds like more conspiracy bullshit with no actual proof

Dude, so many books and articles have been written about this. The fact that this is new to you does not make it a conspiracy theory. It's not even controversial.

Western economists at the IMF in the 90's prescribed a set of policies, now colloquially known as 'shock therapy', to emerging market nations. In Russia these were prescribed ostensibly to help clamp down on an incipient hyperinflation. The radical policies consisted of a simultaneous elimination of all price/currency controls, wholesale privatization of all state-owned industry, and trade liberalization. The results were devastating, and allowed for a looting of the Russian economy by Western capital and, later, by Russian oligarchs in collusion with Boris Yeltsin.

Jeffrey Sachs, who was one of Yeltsin's advisors, has written much about his role in the crisis, and still feels the need to defend his record. Joseph Stiglitz, the Nobel laureate, has a chapter in his book Globalization and its Discontents called "Who lost Russia?" in which he lays the blame square at the feet of free-market economists prescribing economic shock-therapy. Some believe that Larry Summers lost his bid to become President of the World Bank because of his role in the Russian economic reform project(also see: How Harvard Lost Russia for more about Summers).

Sale of the Century, by Chrystia Freeland(formerly the global editor-at-large at Reuters)

The Shock Doctrine: The Rise of Disaster Capitalism by Naomi Klein

Years ago at a now-closed bookstore in Reno, I bought a book called Sale of the Century about Russia after the fall of the Iron Curtain. While the allegory isn't perfect, the synopsis shows some similarities to America's current situation:

&gt; This new society did not just appear ready-made: it was created by a handful of powerful men who came to be known as the oligarchs and the young reformers. The oligarchs were fast-talking businessmen who laid claim to Russia's vast natural resources. The young reformers were an elite group of egghead economists who got to put their wild theories into action, with results that were sometimes inspiring, sometimes devastating. With unparalleled access and acute insight, Chrystia Freeland takes us behind the scenes and shows us how these two groups misused a historic opportunity to build a new Russia. Their achievements were considerable, but their mistakes will deform Russian society for generations to come.

An updated and modified version of this same strategy is being used here via Trump. The American oligarchs are trying to snatch our public lands to strip bare of anything valuable or pollute. We're forcing renegotiations of trade agreements and are in a trade war with China. If we are going through today what Russia went through 30 years ago, we're doomed unless we fight back against the tide.

Hmmm, gonna need some support or sources for that chief if you want me to take it seriously. Here, I'll get you started.

In 1990s, during Boris Yeltsin presidency, Russia was poor, chaotic and corrupt but more free and democratic than today. There was real opposition and real political competition. There was really free press with competing POVs (although mostly controlled by oligarchs). Can be compared to pre-2014 Ukraine.

See Sale of the Century: Russia's Wild Ride from Communism to Capitalism