Reddit reviews Shake Down the Thunder: The Creation of Notre Dame Football

We found 3 Reddit comments about Shake Down the Thunder: The Creation of Notre Dame Football. Here are the top ones, ranked by their Reddit score. 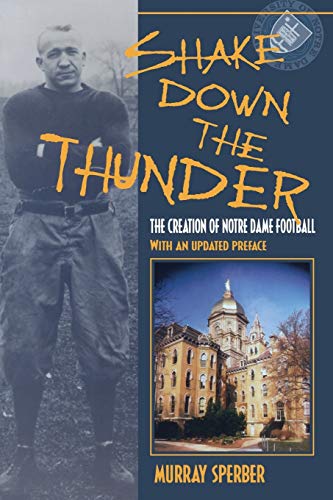 3 Reddit comments about Shake Down the Thunder: The Creation of Notre Dame Football:

Not as sure about general college football history but this was a really excellent book about Notre Dame football history from its creation up to around the WWII era IIRC (may actually go past that, I just know it covers at least to that point.)

I don't want to kill you with a wall of text so I'm going to be a little simplistic in this answer but the tl;dr on Notre Dame playing neutral site games against random teams like Navy goes along these lines:

Notre Dame at the time was a small, unknown school which most major universities did not have much regard for academically. While they did cut their teeth and establish their chops as a good football program against Big Ten schools, there was a big cultural divide there that led to some really nasty scenes and an eventual erosion of relations between ND and the regional powerhouses. The animosity wasn't uniform across the board, which explains why ND still maintains on and off series with schools like Purdue and Northwestern (Michigan is a whole different saga) but in general it reached a point where ND needed help filling up a whole schedule.

They did maintain home games against tiny local schools like Wabash College but those contests, in Notre Dame's tiny ass playing field, weren't raising enough funds for a top tier program. They needed to find new partners, which meant intersectional rivalries, and the prospects of getting home and homes was bleak, for the same reasons G5 teams today struggle with that. The only response was to start playing a mix of "buy games" (road games with a minority of the gate going to ND) and neutral site games in big cities like Baltimore, Philadelphia, and especially New York (they were essentially the Boise State of the time). The New York gate receipts from games played in Ebbets Field/Polo Grounds/Yankee Stadium essentially funded the program and served as its biggest marketing point, which led to the establishment of the big "Subway Alumni" base for which ND is famous.

The school's marketing department also played up the religious bigotry they faced from other Midwestern schools (which was essentially true) as well as ethnic bigotry against their Irish, Italian, and Polish players (which was a bit more of a stretch and not necessarily a founded claim). This eventually led Catholics and Irishmen around the nation to support them as a symbol of general anti-Catholic and anti-immigrant bigotry (despite the fact that Notre Dame was founded by French missionaries and had a Scandinavian football coach; yes, the Fighting Irish thing was a bit gimmicky but became a self-fulfilling prophecy).

It looks like you got your link syntax backward. I tried to fix it for you!

Within that same article, Maisel says:

&gt;Yost not only led the opposition to Notre Dame's membership, he pressured Minnesota to end a series of games with the Catholic institution.

&gt;After cancelling the series, Yost was instrumental in corralling together the member schools of the Western Conference (the current day Big Ten Conference), refusing entry to Notre Dame and suggesting that conference members should not schedule the Fighting Irish. As a result of the boycott by Midwest opponents, Notre Dame scheduled games against schools on the east coast and west coast, such as USC and Army, and did not play Michigan again until 1942.

There are a couple other books that I know on the subject. I think one is called 'Shakedown the Thunder: The Creation of ND Football' that lays a large majority of the blame at Yost's feet.

Plus there are quotes like this (after Michigan was named 'champions of the west' despite losing to ND and having a worse record) that leave a pretty bad taste in my mouth:

&gt;"Of course we are champions. They have a good team down there, but you must recognize the fact that we went into that game caring little whether we won or lost. Practice was what we wanted."