Reddit reviews Shake Hands with the Devil: The Failure of Humanity in Rwanda

We found 13 Reddit comments about Shake Hands with the Devil: The Failure of Humanity in Rwanda. Here are the top ones, ranked by their Reddit score. 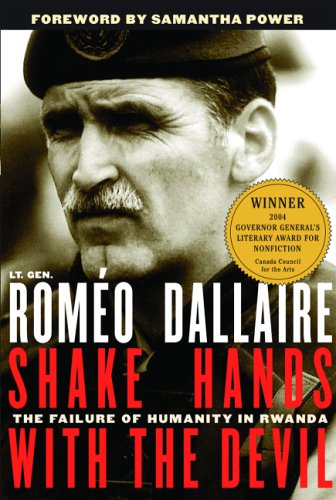 13 Reddit comments about Shake Hands with the Devil: The Failure of Humanity in Rwanda:

This is incorrect. The UN has 95,000 uniformed peacekeeping forces all over the world. Having countries negotiate through the UN has led to a decrease (but not elimination) of conflicts in Sierra Leone, Liberia, Burundi, and North/South Sudan. The UN set up tribunals for Yugoslavia and Rwanda. Of course much more could have been done, but they don't do nothing.

They DID do something in Rwanda. While the whole world stood idly by, Canadian General Romeo Dallaire joined their peacekeeping force and saved thousands. Again, of course so much more could have been done, but that's not nothing.

I'm at work right now, but I have a journal with a few brief interviews with some victims of the genocide. I'll transcribe them in the evening.

Also, watch Sometimes in April instead of Hotel Rwanda.

Excellent books on the subject: We wish to inform you that tomorrow you will be killed with your families, Machete Season (the genocidaires speak...), and Shake hands with the devil.

Also, I think it's very unlikely that PK steps down in 2017; there was talk of amending the constitution during the last round of elections.

I have a decent amount of insight, having lived there for 2 years and change, but am in no way an expert FWIW.

Also Shake Hands with the Devil by Romeo Dallaire, the leader of the UN mission in Rwanda during the genocide. It givesa fascinating perspective.

Like Rwanda, where nearly a million people were killed in about a month. With machetes. Many of the early deaths when the killings started were done in churches. Since that's where people initially gathered looking for safety, that's where the genocidiers went to kill. Shake Hands with the Devil is a pretty tough but good read.

For anyone interested in the Rwandan Genocide, Shake Hands with the Devil: The Failure of Humanity in Rwanda by a Canadian General in charge of peacekeeping in Rwanda is a MUST read. It really lays out the frustration they were feeling trying to get the UN and its super powers more involved. The US sat by mainly because of how badly we got beat up in Somalia and that the US public was dead set against losing soldiers to conflicts that didn't directly affect them :/

We Wish to Inform You That Tomorrow We Will be Killed With Our Families: Stories from Rwanda and Shake Hands with the Devil: The Failure of Humanity in Rwanda.

Also Survival in the Killing Fields

I'm a 19-year-old boy from Ottawa, Canada (you may have heard of our little country :P ). While I was not homeschooled per se during my public school years (I went to regular English schools), I definitely learned more quickly, more thoroughly and more widely due to my parents' constant efforts to teach me things that went way above and beyond what I was "learning" at my high school.

My parents are both high school teachers, and have each spent roughly 30 years teaching their respective subjects.

My dad actually just retired last year, but he taught most of the Social Studies curriculum during the course of his career (History, Philosophy, Psychology, World Religions, etc.). He is a bilingual Francophone from Ottawa, so he taught at one of the French Catholic high schools in our area. He also happens to be somewhat skeptical of religion (not an atheist, but damned close). Odd combination, yes, but it has resulted in him introducing me to
military history, everything from the Roman legions to the Knights Templar to the Taliban.

My mother was born in Ottawa, to Greek parents who had left Greece after the Second World War; my grandparents are from a village about 20 minutes away from the modern city of Sparti (Sparta). During the war, the village was at some point occupied by Axis forces (I'm not sure when or to what extent, because my grandparents' English is not great and only my mother speaks Greek).

I decided to include a list (below) of works that I've found particularly interesting (I've never actually written down a list of my favs before, so this may be somewhat... sprawling and will be in no particular order :P ). Depending on the ages of your kids, some of this stuff might be inappropriate for them right now, but they can always check it out when they're older. It's mostly military/wartime history that interests me (it's what I plan on studying in university), but I've learned so many little tidbits about other things as well from having access to these works. Since your kids are all boys, I hope they'll find at least some of this stuff to be interesting :) .

Shake Hands With The Devil - the story of the Rwandan genocide by Romeo Dallaire, the Force Commander for the UN at the time.

We Wish To Inform You That Tomorrow We Will Be Killed With Our Families. - Stories from the people who lived through the genocide on both sides.

Library in the other end of the room. And it is three:

Shake Hands with the Devil is on the list, so I'll throw that in here.

Huh, never heard of that before. Seems to have happened years before the genocide and whether that influenced anything is debatable, after all the genocide was committed mostly with the help of machetes.

Annan on the other hand was head of peacemaking during the genocide and according to the UN forces commander it was him who ordered the peacekeepers not to intervene multiple times.

&gt; wonder what the UN achieved there.
They saved the lives of thousands or even tens of thousands of people while the rest of the world sat back and did nothing.

A little recommended reading on the subject: Shake Hands with the Devil