We found 16 Reddit comments about Shure SM48-LC Cardioid Dynamic Vocal Microphone,Gray. Here are the top ones, ranked by their Reddit score. 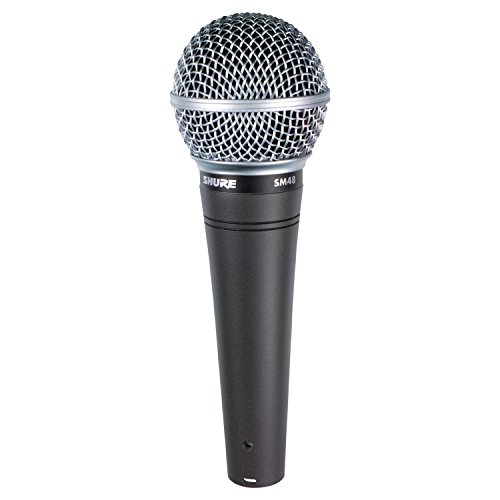 Wedding DJ here. Many of my potential clients consider going without a DJ for their wedding because of the cost. These are my recommendations to them:

Ok studio engineer here. when you say you don’t see the point in getting a better mic i’ll counter with this: you get what you pay for. if you want a better microphone spend more money. if you want to stick with your little usb snowball then that will work but sound like crap.

if you’re budget is lower than that, consider the Shure SM58 for $105

and if you’re trying to go EVEN cheaper than that, the Shure SM48 is so cheap at $35 and even that will sound infinitely better than tour blue snowball.

so let me know if you have any questions. if you’re serious about upgrading your mic you might be intimidated because there’s thousands of options.

Found it for you: http://www.shure.com/americas/products/microphones/sm/sm58-vocal-microphone

Beginners kits get asked often here. Here is what I wrote up a few weeks ago for beginners kits:

20$ Behringer Ultravoice Xm8500 Dynamic [dont be bothered by the price, listen to YT video reviews and how it sounds], its cheap because its just the mic no accessories.

48$ Shure SM48-LC Vocal Dynamic Microphone [This only better option if you going to actually sing, otherwise for voice the first one sound better, again compare and listen on YT, there are people that do 2-3 mic reviews a week and have hundreds in their review list over the years]

60$ Samson Q2U, the best all-in-one, has both USB and XLR, with this one you dont need to buy anything extra, highly recommend in tens of YT reviews by professionals.

If you haven't bought it yet, I actually have the SM48 which is half the price of the 58 and I have had no issues with it. It's still solid metal the whole way through and sounds good. I haven't beat it up yet, but if you really need to spend less then it will be fine.

Well if echos are an issue maybe look into dynamic mics for now. Maybe try out the Shure SM48 and see how that fairs, you'll save money getting the non-on/off switched one. Then I would invest in materials later on to sound treat your recording area to help remove echos. Then you can step up to condenser mics that pick up a much clearer / more accurate sound once you get the room treated.

Our group uses 3 Rode NT1A's which are condenser microphones for reference if you want to hear how they sound.

IMO dynamic mics only work with certain people, most of the time they make people sound nasaly and sound like a sports commentator but some people have the right voice that it doesn't effect them.

Are you talking about having a backing track on the computer, and then recording voice and mixing it to the backing track? Or just voice (like a podcast?)

Either way, I highly recommend a USB-mixer, like this one:

I picked one up off Craigslist for $40 a few years ago. It's a great "swiss army mixer" that I use for little projects at home and on live-sound gigs.

Then start off with a solid vocal mic:

This will give you the option to easily upgrade the microphone in the future if you want to.

Audacity is awesome, and you can check out other options here:

Edit: Most of this post assumes you have a "line in" available on your computer. Most desktops have this already, not sure if laptops do if that is what you game on. Also, the Mackie Mix8 would be better if you plan to use voice chat because you can use the aux send for voice chat.

What mic you need really depends on what you're doing. Some great streamers get by with just a headset mic. Some people have $600 microphones and don't sound wonderful.

If you want to get into pro audio, which it sounds like you do, I would recommend you should opt for a small mixer, maybe something like this:

I would recommend a mixer rather than an interface (such as a Scarlett Solo) because a mixer ultimately gives you more options. The Scarlett Solo is a beautiful device, I have one, but it's good for one voice optionally paired with one instrument, each on mono channels. That small Mackie mixer, which is about half the price, lets you have one voice paired with two stereo channels. Right now I'm sporting a 14-channel mixer I picked up used for $125, and it has more options than I need. Interfaces are supposed to have amazing analog-to-digital converters, meaning the sound they capture is more accurate, but I feed the "main out" from the mixer into a "line in" on my PC and I notice no appreciable difference. I am not an audiophile, though. To do that you'd need a cable like this:

Pair the mixer/interface, whichever you go with, with an XLR microphone. I'd recommend starting small. This dynamic mic sounds decent for a realllly low price:

It's what I currently use. It's kind of a dumbed down SM58. I started with a Sterling Audio ST55, because GiantWaffle uses that and I think his stream sounds great. It turns out my house is super noisy, so the ST55 which is a condenser mic picked up crazy amounts of noise. All the running computers in the room, the air conditioning, pets running around, people talking across the room, people stomping around upstairs, you get the idea. GiantWaffle didn't have that problem because he uses sound dampening materials in his studio, and keeps noisy stuff far away from his microphone. I tried out the SM48, and it works better for my environment, but if I had known better a couple years ago I probably would have bought this instead of the ST55:

A friend of mine has it, and it sounds amazing. It has similar sound qualities to other condenser mics, but it doesn't pick up nearly as much room noise.

I'm sure the AT2035 is great. It's a condenser mic, so it can pick up really quiet sounds, and it likely picks up a huge range of frequencies resulting in a super full-sounding voice. Just make sure if you go with this one that you streaming in a quiet room. Also, it needs phantom power, so make sure that the mixer/interface you're using can support it.

Be sure to buy an XLR cable. Some microphones don't come with one.

Pop filters are cool, but aren't strictly necessary, especially if you aren't singing.

Scissor arm mounts are nice if your desk can accommodate them. Remember you get what you pay for. A normal mic stand will work alright if you have enough room for it.

I should also mention the AT2020, Blue Yeti, and even the Blue Snowball sound great. If you simply want to plug, play, and forget with no options after that, they will suit your needs. Some headsets also have pretty good microphones on them, too. Like this one:

If it's really noisy then you're going to want a well taken care of headset over a fancy mic because those fancy mics will pick up those external noises whereas that headset will only pick up your voice (you may have to raise your voice a bit too).

If I had to choose from the list I would go with neither and get a shure sm48 because it's a fancy microphone, but not too fancy to pick up MUCH external sound like a fan or car honks.

The snowball and yeti (especially snowball) more of a boom mic. Never heard of the samsun meteor though.

Try buying a Scarlett solo interface and some kind of vocal microphone for your voice (No Shit) and use a drum machine heres my setup:

If you're willing to monitor product availability, I would order it from Sweetwater and use your GC for a mic. It's only $40 at Sweetwater.

It's complete for me because it has MIDI in/out, RCA out, and it charges your ipad while you use it. It's INCOMPLETE for a lot of people because it doesn't have XLR in. I overcome this by using a mixer in front of the StudioConnect.

Soooo... in a perfect world, you could construct the following chain:

I'm going to - Both shure mics were recommended as good mics under $50 just wanted some more opinions on them.lly not sure where to start and i need some suggestions. I've found a few, if you could give me your thoughts on them as well.

Behringer Ultravoilet xm8500 - This was suggested in the U.S gamer section, wondering if its a good choice considering how cheap it is.

Shure SM48-LC - Both shure mics were reccomended as good mics under $50 just wanted some more opinions on them.

I've done a bit of research and i think dynamic would probably be better for me, as I'm in a somewhat open room and i fear a condenser microphone might pick up background noise, or my loud keyboard.

I might end up with a Scarlett solo audio interface soon, so I'd like to get a mic that i can take advantage of it. I plan on using it for chatting over discord, games, and recording voice overs. Thanks in advance!

Well then I can't answer about the amp, but here's the mic I bought: https://www.amazon.com/Shure-SM48-LC-Dynamic-Microphone-Cardioid/dp/B0002D0HY4
It's the Shure SM48 which is a budget model of the Shure SM58(the model used during pretty much all beatbox battles). It costs less than half what the SM58 costs with very minor differences in audio quality. If you really want bass to come through as well, I would also reccomend you get this mixer: https://www.amazon.com/gp/aw/d/B000J5UEGQ/ref=oh_aui_i_d_old_o0_img?ie=UTF8&amp;amp;psc=1
It's only $40 which is the cheapest you'll find a mixer of this quality. You can adjust the bass settings to your liking no matter what set up you're using, on an amp or recording on a computer.

There are a few good dynamics that aren't too expensive:

And of course there are plenty of others, but hopefully this list gets you started looking! I listed them cheapest to most expensive (the E835 is $100), but any of them will be good.