We found 8 Reddit comments about Sit Down and Shut Up: Punk Rock Commentaries on Buddha, God, Truth, Sex, Death, and Dogen's Treasury of the Right Dharma Eye. Here are the top ones, ranked by their Reddit score. 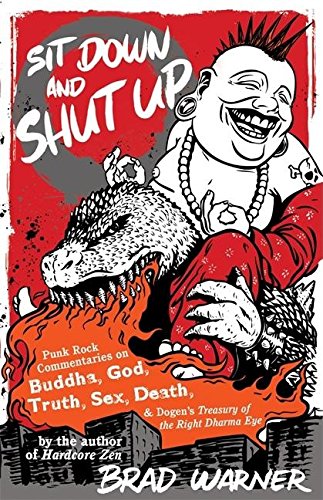 8 Reddit comments about Sit Down and Shut Up: Punk Rock Commentaries on Buddha, God, Truth, Sex, Death, and Dogen's Treasury of the Right Dharma Eye:

One of my favorite books. :)

I do meditate and am even a Teacher in Training at the local Zen Center. I used to meditate once in the morning and once in the evening for 25 minutes each. However, since the birth of my son, I have not been able to get in my morning practice.

I have noticed a profound effect with my training which I attribute to meditation. It has helped keep my fuckarounditus at bay. Just as with meditation, it is rare that each practice session will yield many noticeable results. But trusting in the process and sticking to it, the results present themselves. For some, those results are fast and dramatic. For others, they are slower to come. But this is irrelevant because the path is the goal: sitting meditation is the goal of meditation; lifting is the goal of lifting.

Another way that meditation has helped me in training is that when I am lifting, I simply lift. I am there 100%. I don't have to scream, grunt, or pound my chest. I step up to the bar and pull/push. Either the bar moves or it doesn't (it moves 99% of the time). Then I move on.

And finally, in a surprising twist, seated meditation has helped me with my form. At the base, the legs are in as close to the lotus position as you can get. My legs are too short and think for full lotus, so I sit half. This has opened up my hips making ass-to-grass possible. Moving up, the proper spinal alignment for meditation is the same as for lifting. Sitting meditation makes this the default setting. The same holds true with the neck and head, where the gaze is neutral and the chin slightly down.

YES! Sort of. I'm not sure. I don't smoke much proper weed because of my living situation. It's different on the west coast, things are much more available to you and with less risk. Indica strains are best, but there are actually non-psychoactive pure CBD products that will chill out your anxiety without making you all fucking weird, so you don't have to be paranoid about people 'knowing.'

Over the past year since I started with marijuana I've seen a serious reduction in my panic attacks and crying fits. Marijuana helps me to interrupt my harmful thought spirals and just enjoy my life. I've also lost about 40 pounds, but that's in no small part due to time at the gym as well as marijuana helping me to curb my nervous eating.

I remember I was incredibly nervous and felt super guilty when I first requested my prescription, but I was the only person in the situation shaken by it. It can't hurt to try to talk to a doctor about it, talking with a doctor isn't a crime or anything.

I definitely give less fucks about going out now than I did last year, but I don't feel like I can attribute that entirely to the drugs. CBT and working out have become a part of my life. Something that helped alter my perspective was a book called Sit Down and Shut Up, which is about buddhism overall but makes some very good points about perspective, the self, and letting things go.

So yes, marijuana has helped me, but I have also been trying very hard to help myself. Can you rely on it to fix all of your problems? No. Does it help? Yes.

I really liked The Three Pillars of Zen by Philip Kapleau. It was my first introduction to Zen, and remains my go-to book on all things Zen.

I also really like Sit Down and Shut Up: Punk Rock Commentaries on Buddha, God, Truth, Sex, Death, and Dogen's Treasury of the Right Dharma Eye by Brad Warner

Sit Down And Shut Up is the name of a book by Brad Warner, who happens to look remarkably similar to one of the dudes in this video.

There are several popular 'flavors' of Buddhism, but unfortunately I have not read any general overview books covering all of the sects. Most of my generalized knowledge has come from podcasts like Buddhist Geeks and Zencast. Gil Fronsdal and Jack Kornfield are both enjoyable to listen to.

But back to books!

The most accessible Zen book I've read was Nishijima's To Meet The Real Dragon. Other overviews like Alan Watt's What Is Zen and Shunryu Suzuki's Zen Mind, Beginner's Mind are good but a little obtuse.

And while I can't give it a general recommendation because the writing style isn't for everyone, I really enjoyed Brad Warner's Hardcore Zen and Sit Down and Shut Up.

Of those mentioned, I would go with To Meet the Real Dragon unless you prefer a much more informal style -- then I would pick Hardcore Zen.

That sounds interesting! Do you happen to remember the author? On Amazon I see:

&gt; Everybody's going on about living in the moment. It seems to me we do nothing but live in the presence. Who has time for the future or the past? They seem a luxury for the men and women of leisure if we still have those kicking around. Of course it's a bit more complicated than just being forced to be in the moment. We can't stop our brains. How many times have I not asked it to please just shut down. I understand how people take to drink to dull the mind. Numb the constant pain etc. How do we know ourselves?

We were just talking about this at work just now. I recommended a book I picked up ten years ago that I really enjoyed, although I acknowledge that it's not to everyone's tastes: Sit Down and Shut Up: Punk Rock Commentaries on Buddha, God, Truth, Sex, Death, and Dogen's Treasury of the Right Dharma Eye. The author was a punk rock bassist before becoming a Zen Master, and so very well understands the chaos that the modern mind is confronted with. He does a good job of describing how to be mentally and psychologically still in the face of the vagaries of everyday life. I'll warn you he has a very no-nonsense way of expressing himself, though (in line with his roots in Punk) that might be off-putting to some.

&gt; I think perhaps last week's quote may offer the beginnings of a resolution. If we act according to our purpose and values then maybe we can begin to find and eventually be and know ourselves.

Again, about ten years ago, I stumbled on a book written by some guy who decided he would say "yes" to any activity or opportunity offered him. He was advocating saying yes more often than we do, on the argument that we cut ourselves off from life-changing experiences if we don't. (I notice there's a brand new book on the bestseller list that is essentially a re-hash of the same concept). I've done that for the last ten years, and while I admit I had some amazing experiences as a result, I'm now tending towards saying that I need to say "no" more often lest I am literally drawn and quartered by all the things I have committed to do. Fundamentally, we need to know ourselves well enough to know what means the most to us, and be courageous enough to say "no" (in a nice way, of course) to things that don't match that, and most importantly, be OK with not doing everything. I don't know about you, but I've been hearing about women having to be "superwomen" for so long, admitting that I can't do it all is actually really hard.

&gt; Your friends have a very good point. I used to mentor a lot of young a upcoming consultants. They're we all socially conscious, vegans, active members of you-name-it, hip PC etc. But the moment I gave them a test or a task they were at each others throat. Backstabbing that would make Brutus proud. They very often took personal affront at something and would go on and on about it. In short, special snowflakes indeed. Empathy was considered cool but I'm not sure they really knew what that concept entails.

Is "resilience" a concept you see a lot in your work environment? It's the new big thing here in my workplace - how to cope with an ever-changing work environment, and with the inevitable failures and flubs that come from working in such an environment. Many of our folks scoff at the concept, as though they are expected to be relentlessly positive. But that's not at all what it really means.

&gt; I think humanism should focus more on that and also that with increased individual freedom also comes a certain responsibility. Sometimes I think we forget that in the crusade for more and more individual rights we run the risk of breaking the social contract. Also, a lot of people, these days could do with a little bit of humility in the face of the human condition.

Absolutely. Individuality at the expense of all others is a cancer on modern thought, and I really wish it would go away.