We found 9 Reddit comments about Skin in the Game: Hidden Asymmetries in Daily Life. Here are the top ones, ranked by their Reddit score. 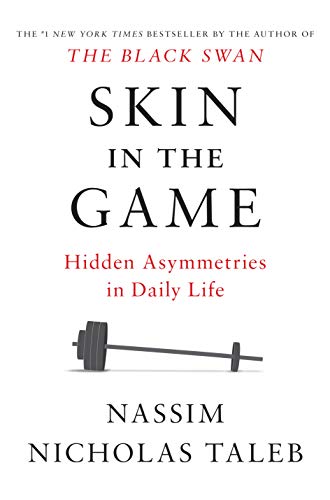 9 Reddit comments about Skin in the Game: Hidden Asymmetries in Daily Life:

Setting goals isn't a terrible idea, however I will say that a 2000% (non compounding) increase is something the best traders would give their arms and legs for lol.

For reference, this is something I was able to do after lots of learning and experience.

These were more done algorithmic than manually trading BUT point still stands.

With that said, you could hit 180% gain in one day with options.

The problem you'll find is that being consistently good is really really hard. What you're essentially setting out to do is consistently win an near random "coin toss".

That's going to take a psychological toll, its going to be grueling but not impossible.

&gt;But I would like to learn the market. Any tips on how to start? What should I start researching? Can I even start trading with that little amount?

$250 is fine starting out. In fact its perfect as starting out there's a possibility you could lose it all, so starting with a small amount is fine.

I would start with paper trading first. Since you're 17 you're not legally allowed to trade. Also, with $250 you can't day trade (PDT rules). So paper trading would definitely be your best bet.

You could also give crypto a try, many exchanges don't really have KYC. A lot of the basics can carry over into any markets.

As far as stuff to learn, these are some of the best books I've read on the subject. You may notice they aren't technical or any "strategies" so to speak. I find those books never help, the mindset and thinking is going to be your biggest challenge.

Trading in the Zone, By Mark Douglas - https://www.amazon.com/Trading-Zone-Confidence-Discipline-Attitude/dp/0735201447

Skin in the Game, by Nassim Taleb - https://www.amazon.com/Skin-Game-Hidden-Asymmetries-Daily/dp/042528462X/

Algos to Live By, by Brian Christian - https://www.amazon.com/Algorithms-Live-Computer-Science-Decisions/dp/1250118360/

A Short History of Financial Euphoria, by John Galbraith - https://www.amazon.com/History-Financial-Euphoria-Penguin-Business/dp/0140238565/

Also, if you're interested in algo or strategy creation at all, I have a youtube channel dedicated to helping beginners make their strategies and learn more. Its on a bit of a hiatus but I'll definitely be getting back to it soon.

DM me here or on twitter if you have any questions! Love to help, questions also keep me on my toes and make sure I'm learning too!

I think you need to take a look at Nassim Taleb's Twitter and read his book Skin in the Game to understand my point. As a leader, it's highly appealing to have imperfections and to lead by example. The net effect of this tweet is that Peterson's true fans like him even more and that he got additional publicity. This is why people don't understand how Trump won the election.

Also 2 books I recommend are by Nassim Taleb, he talks about a guy, fat Tony. In real life, you want the BS detecting skills of fat Tony:

Hard to know the level of knowledge or interest. A good book, video series can be life changing.


Maybe something a bit more about the "new economy"

We're told that the old crop of government agents were trying hard enough. Or that they didn't have the right intentions. While it's true that there are plenty of incompetent and ill-intentioned people in government, we can't always blame the people involved. Often, the likelihood of failure is simply built in to the institution of government itself. In other words, politicians and bureaucrats don't succeed because they can't succeed. The very nature of government administration is weighted against success.

Here are ten reasons why:

Government policies suffer from the pretense of knowledge . In order to perform a successful market intervention, politicians need to know more than they can. Market knowledge is not centralized, systematic, organized and general, but dispersed, heterogeneous, specific, and individual. Different from a market economy where there are many operators and a constant process of trial and error, the correction of government errors is limited because the government is a monopoly. For the politician, to admit an error is often worse than sticking with a wrong decision - even against own insight.

While there are also information asymmetries in the market, for example between the insurer and the insured, or between the seller of a used car and its buyer, the information asymmetry is more profound in the public sector than in the private economy. While there are, for example, several insurance companies and many car dealers, there is only one government. The politicians as the representatives of the state have no skin in the game and because they are not stakeholders, they will not spend much efforts to investigate and avoid information asymmetries. On the contrary, politicians are typically eager to provide funds not to those who need them most but to those who are most relevant in the political power game.

III. Crowding out of the Private Sector

Government intervention does not eliminate what seem market deficiencies but creates them by crowding outthe private supply. If there were not a public dominance in the areas of schooling and social assistance, private supply and private charity would fill the gap as it was the case before government usurped these activities. Crowding-out of the private sector through government policies is constantly at work because politicians can get votes by offering additional public services although the public administration will not improve but deteriorate the matter.

Government policies suffer from extended lags between diagnosis and effect. The governmental process is concerned with power and has its antenna captures those signals that are relevant for the power game. Only when an issue is sufficiently politicized will it find the attention of the government. After the lag, until an issue finds attention and gets diagnosed, another lag emerges until the authorities have found a consensus on how to tackle the political problem. From there it takes a further time span until the appropriate political means have found the necessary political support. After the measures get implemented, a further time elapses until they show their effects. The lapse of time between the articulation of a problem and the effect is so long that the nature of the problem and its context have changed - often fundamentally. It comes as no surprise that results of state interventions, including monetary policy , do not only deviate from the original goal but may produce the opposite of the intentions.

Government intervention attracts rent-seekers. Rent seeking is the endeavor of gaining privileges through government policies. In a voter democracy, there is a constant pressure to add new rents to the existing rents in order to gain support and votes. This rent creation expands the number of rent-seekers and over time the distinction between corruption and a decent and legal conduct gets blurred. The more a government gives in to rent-seeking and rent creation, the more the country will fall victim to clientelism, corruption, and the misallocation of resources.

He deleted the last part of the URL presumably because he thought it was some kind of PII data.

I'm not finding any good links that really jump out like reading the first few chapters would, the amazon reviews do it justice though.

I could get into more depth about it but there is quite a bit of debate on it academia:

Look into why Google and Facebook want to see developers Github accounts in lieu of resumes.

The case against education

What they don’t teach you in Harvard Business School