We found 1 Reddit comments about Spare Scenes: 60 Skeletal Scenes for Acting and Directing. Here are the top ones, ranked by their Reddit score. 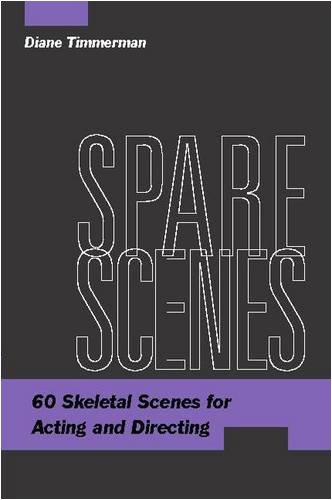 When I taught acting for young people I relied on four books:

[A Practical Handbook for The Actor]
(https://www.amazon.com/Practical-Handbook-Actor-Melissa-Bruder-ebook/dp/B007QPFFXY/ref=sr_1_1?s=books&amp;amp;ie=UTF8&amp;amp;qid=1503710497&amp;amp;sr=1-1&amp;amp;keywords=a+practical+handbook+for+the+actor)

Theater Games for the Classroom: A Teacher's Handbook

I taught Acting and Improv to a range of students: from elementary and middle school kids who didn't really want to be there to dedicated high school kids studying theatre 12 hours a day in the summer. This is typically how I built my curriculum:

The Meisner Technique personalizes a student's relationship with whatever text they're working with. Acting exercises shift away from Being A Good Actor and become about being honest in imaginary circumstances, making observations, and taking action. The exercises can be grueling. The games require focus, and a willingness to make observations about scene partners. Good for serious students.

True and False is a series of essays by David Mamet. If you're not familiar with Mr Mamet, he is an important American Playwright who's work will never be performed in a high school. But he was a student of Meisner's and does a masterful job of articulating the point of Meisner's method and distinguishing it from Method Acting.

A Practical Handbook is Second Generation Meisner - based on the notes of David Mamet's and William H Macy's acting students. It focuses on HOW to choose a dynamic action. Much of the material can be made into worksheets for use in later scene analysis. Suitable for all ages.

Many young actors have little experience to draw from to make dynamic choices. For some students it may be the first time they've thought of how and why they reacted to people and situations. Viola Spolin's exercises can help unlock their imaginations - plus, they're fun.

I say all of that to actually answer your question about finding material:
I highly recommend Spare Scenes.

In College we called them Contentless, or Empty Scenes. They are short, two character scenes. Characters are 'A' and 'B' (sometimes there's a 'C' as well) with anywhere from 10 to 20 lines each. There's no real context to the scenes. There is no action described, only vague dialog:

A: Do you believe me?

A: But not always?

A: But not absolutely always.

The student must apply techniques from Meisner, and The Practical Handbook to analyze the Spare Scene, create a scenario and choose actions that convey dynamic characters. It's hard. But that's the best part - it is very beneficial to fail at these exercises. When students get their hands on actual text - it's like they only have to do half the work! But, as an educator, you also have an endless source of material to practice. So when you have a play, or a One Act, or an actual performance - it becomes an Event.

I've noticed that while many young musicians are taught the difference between Practice and Performance, many young actors are either On or Off. The Meisner Technique encourages the student to resist the temptation to be The Great Actor, and instead focus on building Great Character.

Please forgive the wall of text. This is my favorite thing to rant about. Hope that helps. (edit: formatting)