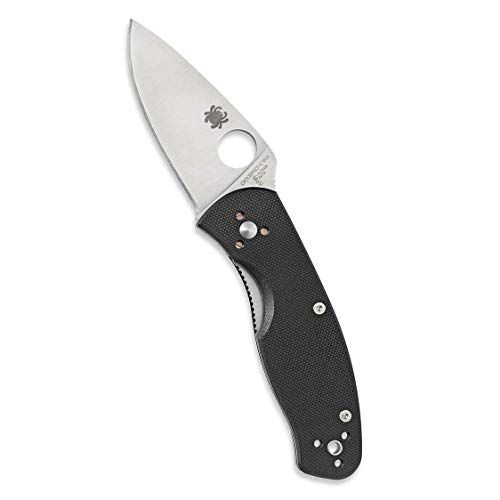 A VALUE FOLDER - Spyderco offers a unique breed of knives that truly live up to their name. They are perfect for novice knife buyers and as gifts for those you might want to "convert" into knife enthusiasts.SUPERIOR BLADE STEEL - The 2.77" 8Cr13Mov stainless blade is leaf-shaped and ground flat from spine to cutting edge for non-stop cutting performance.A SECURE GRIP - It has a black G-10 laminate handle, ergonomically milled with prolonged fatigue-free cutting in mind. Comfort in hand means easier use long-term.EASY-TO-USE - The blade’s shape coupled with an oversized Spyderco Round Hole and textured spine jimping allows you to open the blade and position your thumb on the spine in slip-proof confidence ready for workPOCKET-FRIENDLY - The Persistence includes a Walker LinerLock and a 4-way pocket clip lets the folder be set in a variety of carry and draw positions: Tip-up/tip-down left-hand/right-hand.
Check price on Amazon

Firstly, some unsolicited advice. If there's a low chance of the knife getting confiscated for whatever reason, I'd say save up a little more scratch and get something a little nicer. Alright, now that I've said that, I'm going to assume that you're going to completely ignore it. (Which is fine.)

Ontario RAT 2 always comes highly recommended. You pretty much can't go wrong here. It is a liner lock, which will be a little easier to use one-handed than a lockback. Though maybe only if you're right handed.

I think if I were going for a Spyderco in that range, I'd go with the Ambitious instead. (Right under $30, blade is 2.25 inches.) Or, save up a few extra bucks and go with the Persistence (Just under $35, blade is 2.75 in). The Byrd line is designed by Spyderco, but made by other companies under Spyderco's direction. I'm sure they are a decent value, but if that's what you want, I think you'd probably be better off, and happier, saving your money and getting a Delica 4.

You may also want to look into the Buck Vantage. It's a flipper, so easy opening is there. I think it's a liner lock as well. The steel is okay, but expect to be sharpening it fairly often (maybe once a week if you want to keep it razor sharp).

Another option is the Ka-Bar Dozier. It uses AUS-8A steel, which is pretty good for the price range (in my opinion). Thumb stud, lockback. This one's $20, so a little below your budget actually. Could use some of the money saved to get some sort of sharpening system (DMT Card maybe?)

Blue Ridge Zancudo, designed by the same people behind the RAT series. Pretty much the same idea, but I think the blade shape on the Zancudo is a little better if you need to be able to pierce things.

Last one, the Kershaw Shuffle. A little smaller, at 2.4 in blade length. But has a bottle opener, if you're into that sort of thing. Also, cheaper than any of the rest of the options here. I also think that this one probably has the best blade-shape, in my opinion. It's almost all belly.

Personally, I have found that having the longest knife you have is good, but a lot of the time most of that edge isn't put to good use. Sometimes it's too long, which makes it cumbersome. If you're mostly opening boxes and mail and stuff like that, something closer to a 2.5 inch blade might be more the ticket. I find that it makes it easier to make precise cuts.

Look at the Kershaw Leek, its got a good 3 inch blade, it practically disappears in your pocket, is basically a modern gentlemen's folder, and can get it in several different colors. Its one of the most popular knives out there and is well made. Only thing to watch out for is the tip, its very thin and can break off if you try and use it as a pry bar. You can find the leek for about 40-60 bucks depending on the model.

If you're looking for something heavier duty, the Kershaw Blur or Freefall would be good buys. I use a freefall as one of my EDC knives and think its a great buy for the money. The blur is very well regarded as well, though I don't have experience with one myself.

If you don't absolutely need the spring assist, another idea would be a Spyderco Delica 4, or perhaps a Spyderco Persistence if you want a little cheaper price. Both are solid knives for the money and aren't too bulky in the pocket. You can get the Delica in colors too!

The only thing about that particular steel is that it's carbon steel, not stainless. It will change color over time if you don't put oil on it.

Edit: some other options are this Spyderco or the Ontario RAT, if you are interested in more tactical designs.

For the record, I feel the same that the Cryo is too slippery - which is why I'm super glad Kershaw released a G10 version of it last year.

I also agree that the Tenacious is just a bit too big for EDC - and they do make the Persistence, which is a shrunken version of the Tenacious, with a 2.75 inch blade vs the Tenacious' 3-3/8 inch blade. If you wanna go even smaller, the Ambitious has a 2.25" blade. All 3 knives share a similar design (though the Ambitious is small enough that the proportions might look a little weird to some).

A few other knives of note that are standouts in the sub-$50 price range:

All 3 of your items seem like winners but here are some other options:

Well, for a low budget you can't beat the ontario rat 1.

Not bashing cheap beater knives, but the one you're using is a classic 'tacticool mall knife', stick as much stuff on it as you can and put a semper fi in the name. Done! If that's what you like, fine but they're not known for their high quality. Pretty much everything you get will be an upgrade.

Maybe also take a look at these

In that price range, from lowest to highest price, I found these in a quick search on Amazon:

Last second thought: the Persistence is the same price with a slightly longer blade (still under 3", though).

So is the Skyline

But my favorite is still the Tenacious. What an awesome EDC knife that sucker is. The metal may not be the best, but it makes up for it in durability and it's so easy to sharpen. The knife is of excellent quality and for less than 30$. If you want a smaller blade, get the Persistence (I wouldn't, the Tenacious is the perfect size for me).

Spyderco Tenacious family are all in the $25-35 range if you want a real Spyderco.


With a mini swiss.

Is acceptable for most applications, a larger multi tool is good for in the car or around the house though.

I seriously can not possibly say enough good things about my spyderco tenacious. Get one, or another in the budget line (persistence, resilience)

Though in my opinion, none of these are as good as your Delica for medium/hard use.

I would pick this one for a scout - a bit smaller. and a few bucks cheaper

It's not too big. It's also super durable. Additionally, it's 30 bucks. If you ever lose it or decide you don't like it that much, it's not the worst in the world.

Comes razor-sharp and doesn't need frequent sharpening. Can cut through anything you'd reasonably cut with a pocketknife, destroys cardboard.