We found 12 Reddit comments about Steamer Basket. Here are the top ones, ranked by their Reddit score. 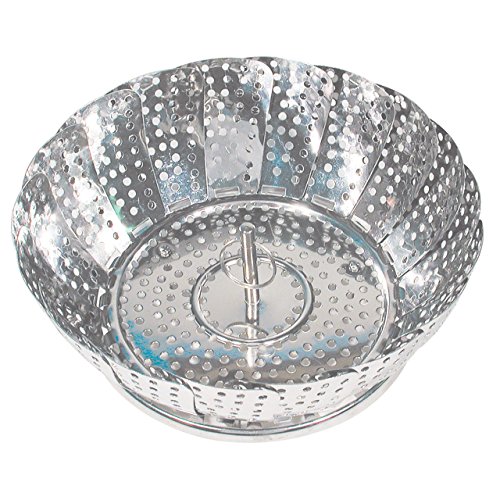 i use one of these directly over the flame.

Here are a few Week 24 ideas for people who don't have grills or smokers:

&gt; How do I learn heat levels?

You can't trust the heat settings on your stove, as they can vary alot among different models. For example, 5 on my stove is a little cooler than what most would consider "medium heat".

You have to play it by ear and adjust. Practice something simple like just dicing and sauteing an onion. Watch how it reacts to different levels of heat. Don't even worry about the final product, just throw it away when you're done. Onions are cheap, and if you're learning from it then it's not a waste of food. Pay attention to the moisture levels in the pan, which is one of the key things you need to control as a cook.

&gt; Does it really matter what size a pan is?

Sometimes. The pan should be big enough to comfortably hold all the food you're cooking, and also the right shape for the job. More surface area = more evaporation. I once messed up a Filipino adobo by using a dutch oven instead of a regular saute pan (the liquid couldn't evaporate fast enough and it tasted gross until I removed all the meat and reduced the sauce down—definitely wasn't as tasty as it could have been).

&gt; Another thing is storing and taste. Lets say I make fries, how should I keep them from being soggy the next day?

Fries are just never going to be as good the next day, but it's mostly how you reheat things that matters. You could bake em in the oven and they'd retain at least some crispiness. Most important thing in food storage is to keep things out of the "danger zone" (40°F-140°F) for any longer than necessary—especially if the food is low-salt and low-acid (like homemade stock). Almost everything can safely be covered in plastic film and refrigerated for up to a week, or frozen for many months. Tight wrapping/tightly lidded tupperware will prevent weird flavors from seeping in/out of your leftovers.

As far as which hardware you need, I'd suggest the following, which should allow you to make basically anything:

Nah, it's a pretty basic, low-rent kitchen tool. Can also use it for veg, etc. You lose fewer nutrients since the veg isn't in the water. Also helps from keeping them cooking to mush.

If you're set on steaming, I've found there is a world of difference between frozen and fresh broccoli. My first piece of advice is to get one of these spaceship-lookin' guys if you don't already have a nested steamer pot attachment. Cheap as shit and gets the job done with basically any vegetable. You'll want to get the water in the pot at least halfway up the legs of the basket to avoid it all boiling out, then throw that on high heat and monitor once the water starts boiling. Shouldn't take more than 8-10 min to steam with the lid on, but you'll want to monitor and stick the broccoli through the stems with a metal fork. You may notice some pieces getting that deeper green than others, and if so, just move it around in the pot so the lesser cooked pieces are towards the bottom of the pile and more towards the middle of the pot.

After cooked, you can either pull the basket from the steamer, pour the water down the sink and throw in butter to melt in the pan (or olive oil), then salt/pepper/cayenne/red pepper flakes/etc and toss the broccoli around in that, or if you're feeling like a fancy boy, melt the butter in a separate pan with some chopped garlic as the steaming is finishing and then pour it into the emptied pot and dump in the broccoli for a nice toss. Delicious.

Sorry for the long post... I have an irrational love for broccoli and it was a huge staple when I lost like 75lbs in a year. Still crush broccoli with dinner at least 4 times a week.

I would say pressure cook it but I doubt you could fit it in a household one. maybe if it is cut up. add some aromatic's stock to fill like a braise not covering the meat totally. try to keep the meat off the bottom. I altered a metal steam basket I ripped the legs out and extra gear on it. Like this http://www.amazon.com/Maxi-Aids-Steamer-Basket/dp/B00012K5I4 . I ripped everything off the basket with pliers including the center screw in nut.

I think someone suggested one of these once:
http://www.amazon.com/Maxi-Aids-Steamer-Basket/dp/B00012K5I4#
It expands and collapses, fits most pots.

With one of these things. Just insert into normal pan.

A steamer basket might open up a lot of opportunities for you. http://www.amazon.com/Maxi-Aids-Steamer-Basket/dp/B00012K5I4

Also, you can stab a potato a few times with a fork than "Bake" it in the microwave. Works just as well as an oven.