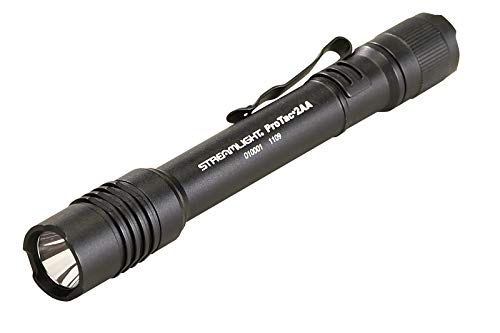 Ignore everyone else in this thread saying Maglite. They're decent, but you can do much, much better. Bring your wallet.

If you're looking for unbeatable reliability, the king of the hill is Surefire. I'd suggest their G2X Pro. However, they take sort of weird lithium batteries; if you'd prefer more normal batteries Streamlight has a number of options in their ProTac and TwinTask series. Streamlight is pretty much on a par with Surefire and massively better than Maglite. In any case, make absolutely sure you choose an LED-based model, rather than one with an incandescent bulb.

If you'd like to save some money and still get a flashlight which is massively better than anything you can buy in a hardware store, come by /r/flashlight and fill out a questionnaire to better qualify your needs. There are approximately a billion different flashlights out there, and people who are genuinely passionate about such things, so it's sort of hard to narrow down your options without knowing what you need it for.

If you don't feel like going to such lengths, I'll summarize a couple of options for you.

Sum up the light in a few words:

The simple one mode guy:

I'm going to go ahead and suggest this Streamlight

Streamlight ProTac 100%. Tough, waterproof, small, great distance for seeing all the way to the back of an attic, and it’s like daylight bright. Only $35

Very Generous of you! Thanks.

A replacement one of these would be fantastic!

The protac has three modes, high -&gt; strobe -&gt; low. Pretty useful, but it takes some getting used to to actually select the one you want. The button on the stylus is very stiff at first, as well.

I've been using this one for years. It's a streamlight, which is comparable to surefire.

It takes two AA batteries. A lot of people write off lights that take alkaline batteries, but unless you're a super enthusiast, I just find that alkaline batteries are much easier to deal with. No dangerous explosion warnings on the box or charger.

The light itself is very durable. Mine tend to last 2-3 years before I lose them, but would probably last for life.

It puts out a ton of light (155 lumens) for its size. Also, don't be discouraged by the complicated labeling. It has 10 different modes, but you can easily set one and then it will always use that one when you turn it on. I hate when lights make me click them five times each time I turn on the light just to find the right setting.

I've had a lot of flashlights. This one is the best I've used taking into account reliability, price, brightness, size, and it's use of regular AA batteries. If got a few of them.

I personally love this flashlight. It's small which I'm sure you would enjoy, cheap, and really bright.

Thanks for setting this up!

Love this sub! Thanks para
https://www.amazon.com/dp/B003GXF9OA/ref=cm_sw_r_cp_api_qCT8Bb4YHX4SY

This is my choice

Thanks for search engine! You’re doing great work.
As to giveaway, I would go with ProTac 2AA

Thanks for the chance! I lost mine after 4 years on a camping trip lol

Winter Storm Xanto knocked our power out early Saturday morning and it just came on last night. We only had a couple cheap plastic flashlights and I was kicking myself for not having something better. Thanks for the opportunity!

I guess this is worth a shot.

A guy I work with uses it as a backup flashlight.

Well, aren't you just awesome for doing something like this!

Thanks for doing this!!!!

Hey, thanks for doing this!

I'll take one of these, please.

Good to know. This is my work flashlight and I think I might wrap it. Thanks for the inspiration!

This Streamlight ProTac fits your requirements but is on the low end of what you're looking for. Takes 2xAA.

Assuming you're in a "heavy disarmament zone" like England or too much of the rest of Europe, by far your best option is motorcycle gloves with armored knuckles. You can use them as direct offensive weapons (no different from brass knuckles) or as defense, punching at the hand holding a knife for example.

Failing that, the other way to get a "brass knuckles" effect is to carry a good small flashlight, something fairly powerful if possible. In the US we can now get very potent small lights in the 600 lumen or more range, complete with a strobe light setting for use as a stunning/blinding weapon at night. I don't know if those are as common in Europe. The ones sold in the US are marketed mainly to the legal gun carriers because we believe it's vital to have both a gun and a flashlight since most trouble happens after dark and it's morally wrong to shoot at something you can't see. So every gun shop has potent flashlights and the 3v Lithium batteries that generally drive them (known here as a CR123). (Most gun shops have an entire jug of CR123s by the cash register.)

This is a good example of what I'm talking about:

This one is nice because it doesn't have a "jagged" business end that makes it more obviously a weapon, but despite that lack it can be used as a "bashing stick" along these lines"

...there's a ton of stuff out there. This basically the Asian version of brass knuckles, also known as a yawara stick.

This is about as good as you can get with a pair of standard AA batteries:

Not as good at "blinding" but not bad and still a very good whacker at both ends.