We found 2 Reddit comments about SummerHawk Ranch Victorian Teak Barn Chicken Coop. Here are the top ones, ranked by their Reddit score. 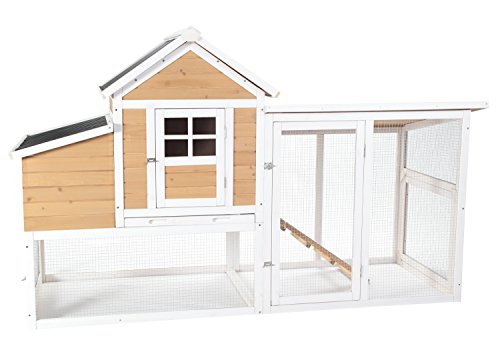 This was at the Costco in Everett, WA on March 19, 2016. I can't find it listed on the Costco website at this time. Looks like a different model than Costco has sold in the past.

This coop is listed at $400 on Amazon (but is "temporarily out of stock"). The description there says that it is "roomy enough to comfortably sleep up to 9 chickens." That seems like too many chickens for this size coop to me, but I don't actually have chickens yet, so maybe I'm overestimating how much size they need?

There are no reviews on Amazon, but a smaller model from the same company has six reviews, four stars. The two three-star reviews both just complain about that one being too small.

I think the max bird capacity they advertise is for bantams. I've seen some of those pre-fab coops that say in fine print that the maximum capacity is for bantams and then how many regular sized chickens it will fit.

The same coop on Amazon says it houses 4. So I'd guess 6 bantams 4 full size?