We found 8 Reddit comments about Tao: The Watercourse Way. Here are the top ones, ranked by their Reddit score. 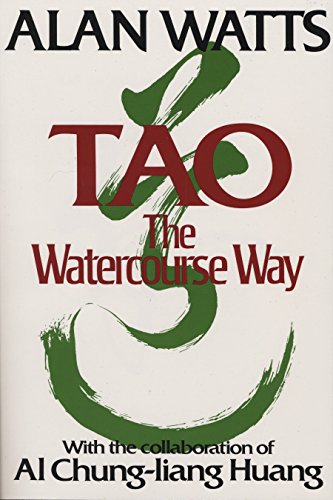 One thing that helps with the Tao Te Ching is to read different translations. It gives you a better sense of what they're really trying to get at. Check some out online compared to the copy you have.

A really good book for learning some ways to apply the Tao to your life is Change Your Thoughts Change Your Life. A bit new agey but helpful. This is an awesome look at the Tao by one of the greats in Western understanding of Eastern thought.

Taoism has had a huge impact on my life, I hope you find your way! One thing I notice in reading the Tao Te Ching is that I can't force my understandings. I often just open up to a random chapter and read. Sometimes it seems like gibberish, but sometimes you're in the exact right place in your life to understand, and the same chapter you've read a hundred times all of a sudden just hits you like... a wave. Or something!

Alan Watts "Tao the Watercourse Way" is all you need (in addition to Lao Tzu and Chuang Tzu) to get started. It changed my life, and is by far the best introduction out there; much more than just an introduction.

Also listen to his many, excellent videos explaining Daoism on youtube. If you like his speaking, you will like his writing. This is a free and quick way to get to know Alan Watts and Daoism.

I read "The Tao of Pooh" and found it unhelpful and a waste of time. It is simply not an introduction to Daoism, and makes no attempt to be so.

One approach would be to check out a book called "365 Tao." It's a wonderful book that gives you a Tao passage every day and then expands upon the meaning of it. 365 Tao on Amazon

A more philosophical discussion of the Chinese language can be found in Alan Watts "Tao: The Watercourse Way" link, particularly Chapter 1 on the Chinese Written Language. You should proceed with caution, though. Having read DeFrancis, you'll be in a good position to critique Watts' description of Chinese.

"365 Tao" link and "Everyday Tao" link, both by Deng Ming-dao are not scholarly works, but they include some interesting philosophical discussions about particular characters which include some etymology.

I'm 24. My first run in with Alan Watts' material was at the age of 17 when I randomly bought The Watercourse Way because it looked interesting - one of the best decisions I ever made. After that, I read The Book - another amazing read.

I then found out that my Aunt's husband was a fellow Alan Watts reader. He informed me that Watt's recorded a plethora of lectures. If you have the means, I highly recommend downloading some.

I also recommend doing a search of "Alan Watts" on youtube, if you haven't. Very [http://youtube.com/watch?v=ERbvKrH-GC4](interesting stuff).

&gt;He talked about language yesterday and how it can't really describe what he is going through because it is so restrictive.

If you get the chance, point him in the direction of the Tao Te Ching. It deals with precisely that. I would also suggest Tao: The Watercourse Way by Alan Watts, which is an attempt at translating the ideas and concepts of contemplative Taoism to a Western audience.

---
The Tao that can be told is not the eternal Tao.
The name that can be named is not the eternal name.
The nameless is the beginning of heaven and Earth.
The named is the mother of the ten thousand things.
Ever desireless, one can see the mystery.
Ever desiring, one sees the manifestations.
These two spring from the same source but differ in name;
this appears as darkness.
Darkness within darkness.
The gate to all mystery.

Knowing the ancient beginning is the essence of Tao.

You're welcome, and thank you!

You make a good point. If your life ends up in a direction that leads to believing the sorts of things Watts talked about, which is no small 'if' in itself, then it will still take some time to process those ideas. I'm in my 40s and only starting to understand some of the things I read in my late teens.

My understanding of formal philosophy comes from books and conversations. ;) I was an art student. Watts is one of the more down-to-earth of the, uh, alternative thinkers/authors/speakers I spend a little time with once in a while. I do read more academic and/or formal stuff, but I tend more toward the mystical (spiritual but not religious) side of things. But I also read popularized physics and stuff like art theory books and the occasional programming manual. I tell you this so you don't go thinking I'm some kind of academic philosophy major before I recommend any books.

Here are the three books I've read from Watts, as Amazon links just because it's easy that way... no marketing here.

The Way of Zen - I read this mostly on the train back and forth to school each day when I was 18. It made some sense, but mostly introduced a lot of ideas I needed to examine and explore for years thereafter. I am not a Buddhist, but I really appreciated the ideas I picked up from this little book. It is on my list for re-reading in the near future.

Tao: The Watercourse Way - I don't think I recall much from this. I read it when I was in my 20s. I picked it up at a used bookstore, mostly because it was "by the guy that wrote that Zen book," and because I had heard of the Tao. I don't recall much of it, probably because I was a raging drunk at the time. I think I came to understand the futility of fighting against what you can't fight from this book, but I can't really say off the top of my head.

The Book - I just finished this last week. It's hard to describe, but it is very accessible, as are the other two, and sums up most of what Watts wanted to tell the world. I recommend it highly. Most of that thing I wrote before is from there, and from recordings of him speaking about it.

Search for Alan Watts on Youtube. There are many recordings of him. Most are just bits and pieces of talks he gave, but some are longer. I do this every once in a while (and other names, Ram Dass, Robert Anton Wilson, Terrence McKenna, etc.. Mostly kind of out-there people but I enjoy having different thoughts thrown at me. Watts is quite a bit more grounded compared to a lot of them.) Along the way Youtube recommends other videos from people who fall along that vein. I think you will find a lot there of interest.