Reddit reviews The Agile Gene: How Nature Turns on Nurture

We found 1 Reddit comments about The Agile Gene: How Nature Turns on Nurture. Here are the top ones, ranked by their Reddit score. 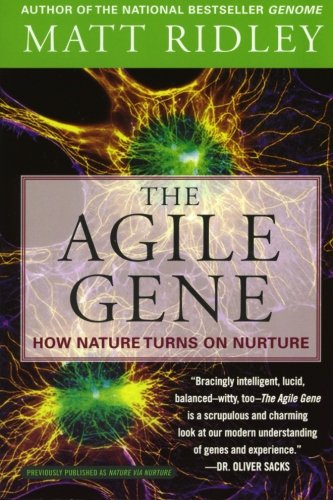 &gt;stillnotking is apparently an expert on early childhood development after reading one book covering one side of a two sided debate. Now I know where creationists come from!

Uh, respectfully, I think you're honestly mistaken on this one: AFAIK, this poster accurately stated the general consensus view in the scientific community and even provided a source. Why is CB criticizing him for not providing additional sources that say something else? Off the top of my head, I can give you a handful of sources that will review the relevant academic literature and offer the same conclusion: here, here, here, here, or here. To quote the last source, the excellent GNXP blog (emphasis in original):

&gt;To review, on many bio-behavioral traits the different choices parents make seem to account for on the order of ~10 percent of the differences you see in the world out there amongst their (biological) offspring. Of the remainder of the variation about half of it is attributable to variation in genes, and the other half to unaccounted for non-shared environment. In The Nurture Assumption Judith Rich Harris proposes that that last effect can be reduced down to social environment or peer groups. Her line of argument is such that parents are important because of the genes they contribute, and, the environmental milieus which they select for their offspring.

&gt;On one level I find this banal to review. If it is not the orthodoxy, this position seems relatively uncontroversial, and the results fall out of the data with minimal manipulation. But as a society such facts have simply not been internalized.

If you want to analogize to the evolution-creationist "debate," I think stillnotking is on the side of evolution (and hence didn't mention creationism because it wasn't relevant as a scientific theory), rather than being a close-minded creationist in the analogy.