Reddit reviews The Alchemy of Air: A Jewish Genius, a Doomed Tycoon, and the Scientific Discovery That Fed the World but Fueled the Rise of Hitler

We found 15 Reddit comments about The Alchemy of Air: A Jewish Genius, a Doomed Tycoon, and the Scientific Discovery That Fed the World but Fueled the Rise of Hitler. Here are the top ones, ranked by their Reddit score. 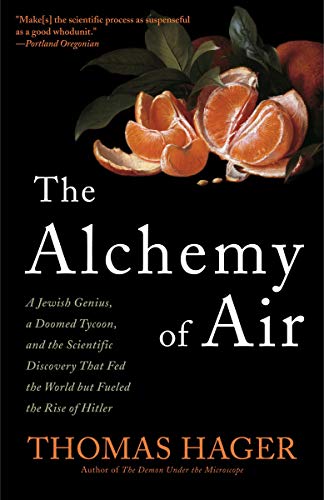 15 Reddit comments about The Alchemy of Air: A Jewish Genius, a Doomed Tycoon, and the Scientific Discovery That Fed the World but Fueled the Rise of Hitler:

It's a little known fact that in the 18th and 19th centuries guano used to be a critical strategic resource, as it was an extremely good fertilizer. You could use saltpeter to get the same effect, but of course saltpeter was used to make gunpower, and saltpeter mines were quite rare, with the British owning the largest natural deposits in India.

Any natural guano deposits were hotly contested by countries all over the world. The Chincha Islands in the South Pacific just off the west coast of Peru were a particularly rich source, and some political friction between Spain and Peru led to the Chincha Islands War (1864-1866), a fight over the precious guano deposits. Spain lost and was forced to retreat, but it was almost moot, as the deposits on the island were mostly exhausted only 10 years later. Since these were some of the biggest in the world, their exhaustion led to an acute shortage of fertilizer that was desperately needed to feed Europe's rapidly growing population.

When Peru, Chile, and Bolivia discovered that they were sitting on top of the single largest natural deposit of nitrates on earth in the Atacama desert (now known mostly for being the driest place on earth, and therefore well suited for very large optical telescopes and NASA testing of Moon and Mars rovers), it was only natural that they should all fight a war over who would be able to control it. This was called the Guano War (1879-1884). A truce was eventually signed but it left hard feelings all around that are still political considerations today in those countries.

In the meantime, however, Germany was watching the whole fertilizer/nitrate situation and realized that if they got into a war, like the one everyone could feel slowly building in Europe around the turn of the century, all the enemy would have to do would be to blockade them (by defeating their historically weak navy and/or taking their historically weak colonies), and they would very quickly run out of fertilizer to grow food with and nitrates to make gunpowder. They started looking for a way to make artificial nitrates, and after a long and fascinating process during which they more or less invented modern industrial engineering, they came up with the Haber-Bosch Process. Haber invented it, Bosch industrialized it. The factory Bosch built was so critical to German industry that it was estimated that if Germany hadn't had it, World War 1 would have ended two years earlier because the Germans would have ran out of powder and explosives. The Allies had gone through the war mostly on British natural sources of nitrates, and bickered over the factory after the end of the war because everyone knew how important it and its technology was for the future.

And so to make a long story somewhat short, Bosch built an even bigger nitrate plant deep in the heart of Germany, which became the single most heavily defended target against aerial attack in World War 2, and he formed the now-infamous IG Farben which is known for, among other things, funding the Nazi party and producing Zyklon B.

All this and much more I learned from an amazingly interesting book called The Alchemy of Air: A Jewish Genius, a Doomed Tycoon, and the Scientific Discovery That Fed the World but Fueled the Rise of Hitler.

Because the hyper-availability of conventional fertilizer is a problem.

Conventional fertilizer placed on bare/tilled ground has a high runoff rate, this ends up in the rivers and lakes. The hyper-available nitrogen (and phosphorus and potassium i.e. NPK) is then available to other plants, namely bluegreen algae. This creates a oxygen deficient that destroys fish and other aquatic life. Its what has killed the Chesapeake bay here on the east coast, and damaged other river systems as well.

"Natural" fertilizers that are also spray applied have the same problems.

Natural fertilizers that are more organic mass in nature (looking at you cow shit) have a lower runoff potential, causing less damage to the adjacent water bodies.

It is of course not just this simple. There remains some issues where once the naturally occurring nitrogen is used up, that fields require conventional fertilizer to grow anything. The use of heavy duty fertilizer, without regard to crop rotation also increases the incident of mass mono-culture farming and other practices that degrade soil conditions.


Now if you talking about your back yard garden... there may not be much of a difference, though some heirloom varieties may not do well in the conventional fertilizer after a few cycles because they are adapted for a more complex soil profile, one that pure NPK spray will not provide.

Some recommended reading: The Alchemy of Air by Thomas Hagar
https://www.amazon.com/Alchemy-Air-Jewish-Scientific-Discovery/dp/0307351793

First thing I'd recommend is a blog; More specifically, Derek Lowe's Things I won't work with. Read from the oldest to the newest. It's whimsical, funny, scary and fantastic.

Hager - The Alchemy of Air: About the Haber-Bosch process.

Coffey - Cathedrals of Science - Personalities and Rivalries That Made Modern Chemistry

Two amazing books called The Alchemy of Air and The Demon Under The Microscope talk about how late 1800s/early 1900s Germany was able to come to power by reling on its universities working closely with large Germany industries through research and development. Germany didn't have to many abundant resources besides coal and with that they did incredible things. They were also late to game in terms of colonization and trading companies, which they had to overcome when they were somewhat isolated from the world during WWI and II.

If you are an eningeer or scientist I highly recommend these books. Thomas Hager is an incredible writer.

The Alchemy of Air was great!

If you liked that I'd recommend The Alchemy of Air. It's about the history of fertilizer and nitrogen, or more specifically the Haber-Bosch Process and how it's discovery in the early 1900s allowed for the mass-production of fixed nitrogen/ammonia, and how that one discovery has completely reshaped the world, from wars to agriculture to population growth, etc, etc.

There's a good book (probably many) that talks a lot about BASF in that time period.

Jewish stuff aside, I'm currently in the middle of The Alchemy of Air about the Haber-Bosch process for fixing nitrogen and In the Heart of the Sea: The Tragedy of the Whaleship Essex, about the Essex disaster, which inspired Moby Dick.

The Alchemy of Air is a fascinating book on the history of the Haber Process, and as geeky as it is: the beginning of the synthetic chemicals business is well detailed in Mauve and so is Napoleon's Buttons and anything by Joe Schwartz.

Here is an easy to read popular science novel about chemistry in the period of WW1-WW2
The Alchemy of Air: A Jewish Genius, a Doomed Tycoon, and the Scientific Discovery That Fed the World but Fueled the Rise of Hitler.

This has almost nothing to do with your academic work. Read it any way. You won't be disappointed.

The definitive book on Haber-Bosch

I am not totally sure what you are asking for actually exists in book form...which is odd, now that I think about it.

If it were me, I would think about magazines instead. And if you really want to push him, think about the following options: