We found 7 Reddit comments about The Art of Living: Vipassana Meditation. Here are the top ones, ranked by their Reddit score. 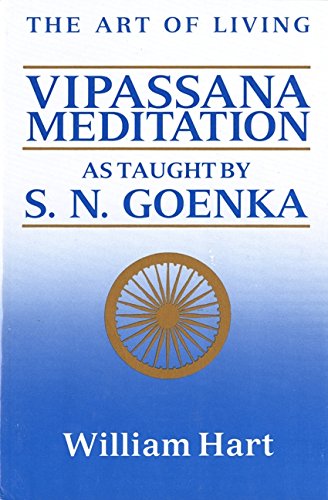 7 Reddit comments about The Art of Living: Vipassana Meditation:

The Art of Living by William Hart. It focuses on Vipassana Meditation as taught by S.N. Goenka who has very universal non-sectarian approach to Buddha's teaching.

By "AoL," are you referring to the use of S. N. Goenka's method of teaching Vipassana (insight) meditation? If so, one can easily learn it from the book of the same title.

There are lots of different kinds of meditation. That said:

Turning the Mind Into an Ally

And if you're into Vipassana: [Goenke's The Art of Living] (http://www.amazon.com/The-Art-Living-Vipassana-Meditation/dp/0060637242)

I'd advise seeing if you can find a center to get some in person instruction if at all possible. Best of luck!

I was recommended this after getting into Vipassana. I could only read part way though because it honestly felt like a more muddled repackaging of something to-the-point, simple, and honest like The Art Of Living.

Sorry for the delayed response...

The philosophy books I would recommend reflect my personality and what I find interesting. However, the way my interest started was really just browsing a shit-ton of wiki pages of the many philosophies. As I did that I began to become familiar with the well-known philosophers and what they were about. Then the philosophies/philosophers that struck my eye I purchased books by them.

An example of philosphies/philosophers would be Buddhist philosophy and Nietzche (Nietzche just has a whole bunch of good shit to talk about). I've read the Diamond and Heart Sutra which was very interesting (and relevant to my experiences with psychs). And I've always been interested in meditation which led me to read a Vipassana Meditation book which focuses more on the practice -- however the book is loaded with wisdom.

I just read Notes From the Underground by Dostoevsky and it really resonated with me because of the way the Underground Man thinks. He ponders existential questions but he is tremendously neurotic. While I'm not as loony as the Underground Man I still related to his thought patterns and how he constantly over-analyzes everything. It's actually quite humorous at times too.

I think it is fun to supplement philosophy with some good old knowledge of the brain and psychology. Consciousness has always fascinated me but I didn't know much about the brain to begin with. So I initially read a book about the brain where it explains all the various functions that compose the entire brain (brain stem, hypothalamus, corpus callosum, cerebrum, cerebral cortex etc.) and what they do, why they're important and how they all interconnect. Wikipedia is also good for that. After that I wanted to know more about how that all creates consciousness. I've just started reading "Self Comes to Mind" and I'm about half-way through and it's pretty good. It's by a neuroscientist named Antonio Damasio and he hypothesizes how consciousness came to be and then argues his point with some great and profound ideas.

Last but not least, I would highly recommend Jordan Peterson's lectures. They are absolutely amazing. He's a psychologist and he has various playlists to choose from. I'm currently listening to his Personality and its Transformations playlist and it is absolutely life changing. His lectures go all over the place -- he talks about it all. The human experience and existence. He has actually influenced my philosophy/perspective a lot and because of him I've found many great thinkers that I agree with (Piaget is one example).

&gt;I was worried I'd dislike programming and suck but fortunately I just suck.

I'm not sure how far you are into your programming classes but i definitely felt the same way about my self. I thought I was a garbage programmer and that I should just quit. But then there came a time where it all just clicked and it became a game or a puzzle.

Apparently I'm not the intellectual in this crowd ;)

As someone new to Buddhism, this is my current reading list:

Read Vipassana Meditation and then go on a Goenka weeklong retreat and you'll know just about as much as any expert.