Reddit reviews The Battle for Spain: The Spanish Civil War 1936-1939

We found 11 Reddit comments about The Battle for Spain: The Spanish Civil War 1936-1939. Here are the top ones, ranked by their Reddit score. 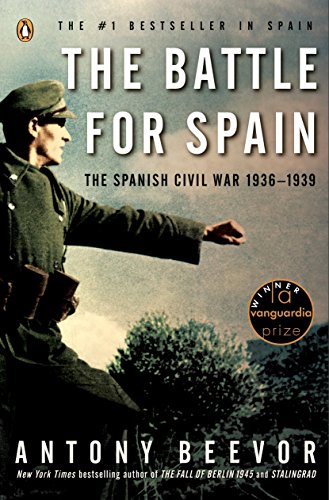 That's a very complicated topic and I don't feel qualified to give answers based off my recollections.

The best books I've read on the Spanish Civil War - https://www.amazon.ca/Battle-Spain-Antony-Beevor/dp/014303765X and https://www.amazon.com/Spanish-Civil-War-Revised-Paperbacks/dp/0375755152 don't go into detail on the command structures of each side, but it will give you a very good idea of the effectiveness (or lack thereof) of the Republican forces in Spain, the extent of Soviet, German, and Italian involvement (as well as their relative effectiveness). Beevor's book is more recent and I'd say a bit more readable and does a good job of criticizing the response of the democratic powers, while at the same time giving context to their hesitance to get involved. Thomas' book is older, does a better job of staying neutral on the Republican/Nationalist debate, but goes a bit softer on the democracies than Beevor.

Truth be told, I don't know of a source that details how the left was organized. The war was very chaotic, and the Republicans were deeply divided into factions. Catalan anarchists wanted nothing to do with communists, the Republican government itself was divided about how much involvement with the USSR it wanted, the Basques were seeking independence and collaborated out of necessity more than anything else, the Soviet advisors increasingly infiltrated the main Republican forces, until the Republican's gold started running out.

The Battle for Spain by Anthony Beevor is considered the definitive, modern single volume history of this conflict.

Beevor is renowned for his justifiably famous books Stalingrad, D-Day and The Fall of Berlin.

I will answer part of your question.

The Spanish Civil War is a fascinating topic. If you want any reading on it, just check out some of the following books:

Homage to Catalonia by George Orwell. It is a first hand account of Orwell's experience in the war. It was quite fascinating to read about the different political views of people and the various issues which the Republican forces faced internally, as well as externally. It also gives you a first person perspective into the May Days in Barcelona.

The Battle for Spain is by Antony Beevors. I have picked it up and am currently about halfway through it. It is quite good, and it examines the various causes of the war, and the players associated with it.

Also, don't be afraid to check out Picasso and Frederico Garcia Lorca. Popular artist and poet respectively, their works were heavily influence by the war.

Now, on to other wonderful things. If you still have an interest in the Spanish Civil War, after you read more on the subject, I would recommend the film Tierra y Libertad, or "Land and Freedom". It somewhat mirrors Orwells book, and it is actually a good look at the various people who took part in the war. One scene was particularly interesting, and that was the scene where a town was liberated, and the townspeople had to decide whether or not they would collectivize the farmland (basically a communist revolution, everyone works the land equally and gets the same amount) or to divide up the land and give everyone just a little bit more than what they had previously. This was a major issue during the war and actually caused a rift amongst the Republican forces, leading to (literal) internal fighting. The idea of revolution now vs. revolution later was a huge issue during the war, and this one scene (though fictional) was a good example of it. (I only recommend the film because it was a good cap to the subject. I wouldn't consider citing it as historical fact, as in I cannot say for certain these events happened, however, the scene mentioned was, in my opinion, a good example of the various sentiments which caused divides amongst the Republican Forces.)

As for the questions about WWII, please consult the Popular Questions Page.

For those of you that wish to read a great book about this period of Spain's history I recommend this book:

It is written with a fantastic narrative that keeps you engaged and interested without overloading you with bland historical accounts.

The historian Antony Beevor recounts this event in his book The Second World War.

&gt; The gleaming carriages of the Amerika carried on towards the Spanish frontier at Hendaye, where [Hitler] met Franco the next day. The Caudillo’s train had been delayed due to the dilapidated state of the Spanish railways, and the long wait had not put Hitler in a good mood. The two dictators inspected a guard of honour from his personal escort, the Führer-Begleit-Kommando, drawn up on the platform. The black-uniformed troopers towered over the pot-bellied Spanish dictator, whose smile, both complacent and ingratiating, seldom left his face (Beevor 2012, 144).

&gt;When Hitler and Franco began their discussions, the Caudillo’s torrent of words prevented his visitor from speaking, a state of affairs to which the Führer was not accustomed. Franco spoke of their comradeship in arms during the Spanish Civil War and his gratitude for all that Hitler had done, and evoked the ‘alianza espiritual’ which existed between their countries. He then expressed his deep regret for not being able to enter the war immediately on Germany’s side as a result of Spain’s impoverished condition. For much of the three hours, Franco rambled on about his life and experiences, prompting Hitler to say later that he would prefer to have three or four teeth pulled than go through another conversation with the Spanish dictator (Beevor 2012, 145).

I liked reading Anthony Beevor's The battle for Spain a lot. It is a very readable and accurate account of the civil war. It does introduce you to Spain, before the war as well.

Someone who reads about the conflict?

Normally I think Wiki is a good source, but in this case I think it's pretty heavily biased. The Republic didn't have a broad majority, it had just regained power after losing to the right, and it won by something like 2% of the popular vote. Moreover, it acted immediately with not only radical policies, but also against a background of increasing violence in all areas. Just as an example, imagine that the Secret Service, in response to an assasination by a terrorist movement loosely aligned with one of the more extreme parties of the opposition coalition, then, decides on its own to assassinate the leader of the political opposition. It wasn't as simple as 'economic crisis makes people vote for left-leaning government'. For starters, the depression didn't really hit Spain much. The roots of the war were much deeper.

The book I'm reading now on the subject is The Battle For Spain. In the opening pages is a summary of the fourteen different political groupings that made up the main players. It is exhausting to follow the twists and turns of domestic politics, but one thing that shines out is how bloodthirsty both sides were, and how eager to kill off their political opponents. The Spanish civil war was just that - a civil war where people had already decided to kill each other for their own reasons, not some simplistic political just-so story. The later imposition of the ideologies sweeping Europe (Communism and Fascism) are often mistaken as causes of the war, when in reality they were at best minor side characters. Another counter-narrative is that the left wing parties, had they lost the elections, were planning a revolt against the central government, which would also have touched off a civil war.


It's a great book! Very detailed and extensive though.

I haven't read Berlin yet (I'm got a reading list taking me from World War I-World War II, I just started a book on the Polish campaign), but I can definitely recommend his book The Battle for Spain. It was a really good read on what I like to call the "pre-season" game of World War II.

That's bullshit. The reason ww2 didn't start sooner was because of Hitlers slow rise witch was directly an result of the versailles threaty. Hitler had to kickstart a dead economy, clandenstinely build up his millitary force including the gigantic task of getting the luftwaffe up and running, and secure resources for both the buildup and the coming war. He didn't have power because he burned down a stupid building and made some draconian laws. He accumulated power by securing resources, most importantly oil, coal and liqudified coal, shaping a millitary force under everyones eyes and geopolitical manuvering.


How do you even see that happening without the distracting utter chaos that was the spanish civil war? Francos and Mussolinis efforts where also a big factor in the rise. But ofcource most of what made it possible was the communist russians that where helpfull in being an adversary with clear exspansion plans.


I'm not saying there is a simple direct correlation, but seen as a whole what happened in Spain gave Hitler geopolitical allies and distraction.

Now. If your not an history professor that will rape me with facts I don't have time to reasearch and subsequently construct an refutation. A book that lead me on to this thinking was "The Battle for Spain: The Spanish Civil War 1936-1939" by one of my favorite war writers Anthony Beevor https://www.amazon.com/Battle-Spain-Spanish-Civil-1936-1939/dp/014303765X?SubscriptionId=AKIAILSHYYTFIVPWUY6Q&amp;amp;tag=duckduckgo-ffab-20&amp;amp;linkCode=xm2&amp;amp;camp=2025&amp;amp;creative=165953&amp;amp;creativeASIN=014303765X

Start here if you want arguably the best book about the complexities of the Spanish War, written by Antony Beevor, a well regarded historian.