Reddit reviews The Big Sort: Why the Clustering of Like-Minded America is Tearing Us Apart

We found 22 Reddit comments about The Big Sort: Why the Clustering of Like-Minded America is Tearing Us Apart. Here are the top ones, ranked by their Reddit score. 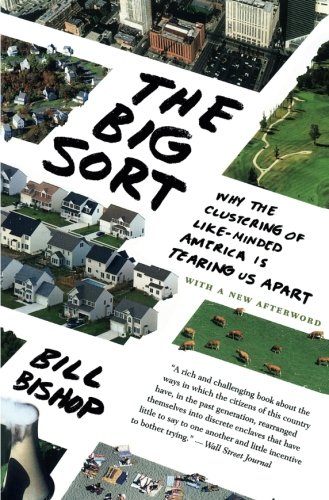 22 Reddit comments about The Big Sort: Why the Clustering of Like-Minded America is Tearing Us Apart:

There's an interesting book about this, The Big Sort by Bill Bishop. It looks at how people have moved to areas that align more with their politics, consciously or unconsciously, over the past 50 years. Worth a read if you like this sort of thing.

Not /u suicidedreamer but this segmentation of society is not just online you also have multiple books written on it http://www.amazon.com/Big-Sort-Clustering-Like-Minded-America/dp/0547237723/ref=sr_1_1?ie=UTF8&amp;amp;qid=1457777624&amp;amp;sr=8-1&amp;amp;keywords=the+big+sort

Even before that you had the removal of urban centers which were focus points/meeting grounds for exposure to people from different walks of life.

A demographic shift taking place nationwide. This book puts it in a good context.

&gt;It didn't really change anybody's mind, and one's view on it was 99% shaped by what they were already thinking.

These books are about why they think that way. Hillbilly Elegy is about communities (mainly the non-urban communities that gave Trump huge support) that feel left behind and the recent history and thinking of those groups. The Big Sort is about the homogenization of social groups and thinking in the US, leading to why people feel comfortable throwing "grenades". The Righteous Mind is a book on the psychology of morality and politics in the US and why the ideologies are so different.

Trump may have won big with white voters of all stripes, but he also did better among Latinos than Romney, so it's obvious that it isn't just "poor uneducated whites", but if people don't try to figure out why the division is so strong and where the other side is coming from, what chance do we have for uniting and restoration?

I live in the most liberal district in one of the most liberal cities in the US. I have no difficulty in understanding that perspective and its driving forces. The other view is not so well illuminated

Edit: though I shouldn't have said anything in the first place. This is the one place I can go to avoid all the cross-talk about politics and ideologies. I like all of you guys and our light conversations about shoes. I'd rather not ruin that for myself.

There's a book titled The Big Sort: Why the Clustering of Like-Minded America is Tearing Us Apart by Bill Bishop. I haven't read it myself and only came across it yesterday, but it seems relevant to what we're discussing here.

If conservatives had their way, the federal budget would be smaller. Certain large federal bureaucracies would be shut down and dismantled. There would be no Obamacare and no Dodd Frank.

What we have right now is not conservative rule, it's a stalemate. Given the polarization in society at large, the stalemate is a product of politicians on both sides of the aisle representing their constituents as best they can.

The problem isn't Congress; it's the constituents. A radical polarization has occurred in American society over the past few decades. This book offers one possible explanation. Unless we citizens can bridge the gaps in society, we should not expect Congress to do it for us.

Edit: I shouldn't say the budget would be smaller under conservatives. They certainly didn't do much to shrink it in the Bush years.

Nah man they do that on their own really really well. For an investigation of this phenomenon at scale in the real world, check out Bill Bishop's The Big Sort.

Funny, the least echo-chamber-ey subs I know of are some of the most heavily moderated. See /r/NeutralPolitics or /r/PoliticalDiscussion.

Historically in broad strokes no.


This can only happen within political systems which prop up binary choices.

A fairly popular book was written on this very subject back in 2009. The Big Sort

&gt; You're fooling yourself if you think that's the primary issue.

And yet, report after report shows that geographical self-sorting is the number one driver. ^123

&gt; No one is debating compactness as the main problem that creates gerrymandering. The issue is political lines drawn to minimize Democratic voters.

And yet, here you are doing exactly that.

I'm not sure your hypothesis is backed by the evidence. People are plenty different, not just due to cultural differences, but also due to basic differences in their personalities (which are largely determined by genes).

Moreover, to say that Ice-T's agreement with Rush on the issue of gun control is evidence that we're all simiilar s spurious. Let's see how they compare on other issues? These two are oil and water. That they agree on one issue at all is surprising.

&gt; By living in the same place where there are role models of people who care about the property, and the property itself is maintained to very high standards, you create an atmosphere that demands respect.

Nope, there is tons of data showing that this is demonstrably not true. That is exactly how people theorized Section 8 would work, and it hasn't: the worst drag people down, the best get the hell out and form their own communities.

I realize you're in the ivory tower. I hope that you'll actually listen to what the real landlords are telling you here.

We could "un-sort" our way out of this by calling for a influx of citizens into the low-population states. California certainly can spare some. Of course, not all current Californians would be interested in that, However, there should still be more than enough to slowly bring the desirable changes and comforts into the ex-red states. Start with the Dakotas and Montana.

How is it victim blaming when you are the one carrying out the action..... If a district is 50-50 in Kentucky and 10% of Democrats are continually moving to a more liberal area rather it is a city or a state to be surrounded by people with similar views then that district will probably never go blue again. There is even a good book on the topic called the big sort. https://smile.amazon.com/Big-Sort-Clustering-Like-Minded-America/dp/0547237723?sa-no-redirect=1 . Also regardless of your strong personal opinion on the topic that will result in losing the House and state legislatures in most of the south and west every year barring a financial collapse or impeachment that provokes a backlash.

I think you're confusing cause and effect.

The big thing that's happened in the last 30-40 years in American politics has been sorting. Look up The Big Sort.

Essentially, before 1965, you had lots of Southern Democrats who were more ideologically conservative and a smaller, but still significant number of Rockefeller Republicans in the North who were more ideologically liberal. The largest reason for congressional dysfunction is that increasingly representatives are more responsive to their constituents than before. This causes more gridlock, not less.

Now, you can argue that those constituents are frequently not thinking of their own best interests, but it's hard to make the case that in the vast majority of instances, congress is more responsive, not less.

You are certainly welcome to believe anything you'd like, but if you insist on holding pejorative views of others, don't be shocked when they don't react positively.

In terms of you claiming that the Democratic party leadership not reflecting the values of the Democratic electorate - you are correct. Democratic leaders are considerably more liberal and progressive than the general public at large. Again, the whole thing that started this conversation we're having is me pointing out the election results, which clearly shows this issue.

I clearly understand how you get to that condition. Thanks to The Big Sort, lefties in big emerald blue cities almost can't help but fall into group-think. While suburban and rural Democratic activists are stuck trying to explain to you that America isn't all a bunch of frustrated socialists.

In terms of Donald Trump, please understand that there is a huge white temper tantrum going on, as the 1950s economy, where if you were American, white, and male, you could get a job more or less straight out of highschool, even if you learned nothing there. The US hasn't fallen behind in the market, so much as the rest of the world has caught up, and succeeding if you're the "right" kind of person, isn't so easy anymore. Hence the tantrum.

Most of this tantrum exhibits itself as blatant white racism and nativism, but there is the leftist version of this as well. Scratch the surface of a so-called "millennial" supposedly angry at "capitalism", you find they're no more in favor of raising taxes on the rich than others. Measure 97 in particular, lost in Oregon because the public got convinced by the "rich plutocrats give people jobs and low prices as a gift - not because that's what the market will bear - so tax increases on them will all be passed on to you" canard. It's depressing.

Quite literally, in 150 yeas, no non-incumbent Democratic party candidate has ever followed a Democratic President. This is not due to "incompetence", it's due to the fact that 25% of the public always just votes against the president's party no matter what. It is generally true for Republicans as well, with the exception of Reagan, who successfully convinced the public to shift dramatically to the right.

The voters, mind you. Not the leadership.

No. Democrats are not socialists. We worship neither at the altar of "free markets" nor "government everything". Both concentrate power in the hands of a few, which leads inevitably to authoritarianism. We happen to be pulling in the same direction as socialists - advocating for more government control of completely out of control crony-capitalism and plutocracy that the GOP espouses. But we also see the lessons of socialist corrupt fascism, and don't want that either.

Are you assuming that there haven't been large demographic shifts in the past 20-30 years where the American populace have sorted themselves along common areas of culture? Journalists and political science PhDs write books about this sort of thing (for example: https://www.amazon.com/Big-Sort-Clustering-Like-Minded-America/dp/0547237723).

The people of the Northern Rocky Mountain states are substantively different from Californians, with different value sets, economic ideas, etc. How do you guarantee that decisions that affect those states aren't afflicted with a California flavor that is distasteful to those non-Californians?