Reddit reviews The Death and Life of the Great American School System: How Testing and Choice Are Undermining Education

We found 6 Reddit comments about The Death and Life of the Great American School System: How Testing and Choice Are Undermining Education. Here are the top ones, ranked by their Reddit score. 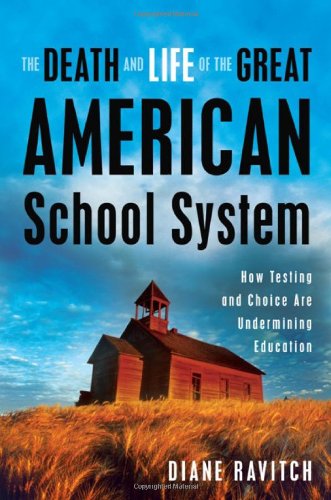 6 Reddit comments about The Death and Life of the Great American School System: How Testing and Choice Are Undermining Education:

About the author Diane Ravitch:

The book looks at many of the debates such as teacher training, school funding, charter schools, nationwide curriculum, parental involvement, high stakes testing, Race To The Top, No Child Left Behind, and the rise of Michelle Rhee featured in Superman.

A great read if you are interested in this area is Diane Ravitch's book, The Death and Life of the American School System: How Testing and Choice Are Undermining Education.

I thought it was written a little poorly but it drives home some important points about illusory performance gains.

It also makes a strong case for the idea that good education reform = curriculum standards, not testing standards, i.e., not focusing on performance but rather on what stops students must hit on the way to graduation.

you should do the same.

&gt; During the campaign, Emanuel declared his support for curtailing teachers’ right to strike. He also made it clear that, if teachers won’t agree to work longer hours for extra pay, he’ll ask the Illinois General Assembly to mandate it.

This is bullshit. He doesn't care about kids, he's furthering his neoconservative Milton Freedman charter school ideology. This move is to make unions look bad, not to solve the problem. He wants to increase charter schools at the expense of unionized public schools, when it's painfully clear that charter schools are not the answer. He's gone as far as to spout false information about public schools to further his agenda.

If you want a hint of the damage Rahm is going to do to Chicago, check out Diane Ravich:

On the Daily Show | In the Wall Street Journal | Her book