Reddit reviews The Experience of Samadhi: An In-depth Exploration of Buddhist Meditation

We found 4 Reddit comments about The Experience of Samadhi: An In-depth Exploration of Buddhist Meditation. Here are the top ones, ranked by their Reddit score. 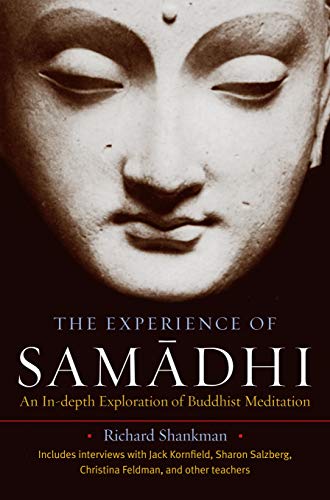 4 Reddit comments about The Experience of Samadhi: An In-depth Exploration of Buddhist Meditation:

&gt;how do you breathe sensitive to sensations

You do these simultaneously, and whatever accompanies your breathing 'unites' with the breathing, hence 'integrating' skillful factors into a single point ('right samadhi').

The anapanasati sutta says you breathe sensitive to the body, then you relax it, then once the 'heebie-jeebies' are cooled, you let the rapture or 'piti' factor of samadhi unite with the single point of the breath, then you let pleasure or 'sukha' unite with it and so on. You continue this all the way, gathering these skillful things up to abstract stuff like, 'I will breathe in focusing on inconstancy,' on dispassion, and cessation of suffering which you could never extend the breath 'into' literally.

This last part I just typed should give you a clue that the instructions are 'simultaneous' because you don't have to make 'insight into impermanence' arise from breathing always or to make your attention move from the breath 'to impermanence' since impermanence is not a thing but a process, and not always a result but could be a 'cause' (for something disapearing, say) instead of something that 'arises' (an effect of a cause). So the linear-chain form is not the way, it's simultaneous and then they unite with the breath.

&gt;I want to ask him...During anapanasati, how do you breathe sensitive to sensations as the Buddha recommends in the Anapanasati Sutta?

Here is what Thanissaro has said about this.

From 'The Experience of Samadhi — An In-depth Exploration of Buddhist Meditation' page 123:

&gt;Thanissaro: It's the whole body.

&gt;Thanissaro: One of the drawbacks of concentration that’s too one-pointed is that you’re blocking out many areas of your experience, which means that a lot of things can hide away in the areas you’re blocking out. If, however, you develop more of a 360-degree awareness of the body, you’re more likely to be conscious of the more peripheral events in the mind. Also, if the awareness is a whole-body awareness, it’s a lot easier to maintain the state of concentration as you open your eyes and move around. Whether the concentration while moving around would be termed jhāna, I really don’t know, but there’s a continuity of mindfulness. If you have only one point that you’re totally focused on, then as soon as you move from that one point, your concentration is destroyed. But if you’ve got the whole body as your framework and you’re constantly mindful of this framework, events can come through and go out, leaving the framework undisturbed.

Here is Thanissaro giving a guided meditation where he shows you how he 'spreads' or unites the breath with the rapture / 'piti' factor. That might give you another idea of the details in practice as Thanissaro sees them.

From what I understand (intellectually -- I have not mastered the jhanas experientially), the "hard" jhanas are the ones of the Visuddhimagga, with no background thoughts etc., whereas the "soft" jhanas are the ones of the Pali canon as taught by people like Leigh Brasington. But it might be even more complex than that. There is another book (haven't read it yet) called The Experience of Samadhi by Shankman about the many, many different things people mean when they talk about the jhanas.

Have you read Richard Shankmans book 'The Experience of Samadhi'?

I'm very glad for this discussion, as it brings to mind the breadth of concentration practice. If I might offer up a book, The Experience of Samadhi by Richard Shankman. It is an illuminating look at the historical, canonical and commentarial descriptions of Samadhi practice, leading to Jhana.

Shankman also has a number of talks online (look on Dharmaseed or AudioDharma, about his book and research, in case a 200-odd page book is too much (!?!)

I appreciate the Visuddhimaga descriptions and style of practice, as it is pretty rigidly laid out. If you ever wanted a way to absorption that seems absolute and cut-and-dried, this would be it. The suttas, however, did not specify this level of requirement, so it would seem that there are more ways to get to absorption than the commentaries would presume.

Until one has some experience being able to discern and map the way through for themselves, however, it can be difficult to make heads or tails of all this.