Reddit reviews The Indian Constitution: Cornerstone of a Nation

We found 2 Reddit comments about The Indian Constitution: Cornerstone of a Nation. Here are the top ones, ranked by their Reddit score. 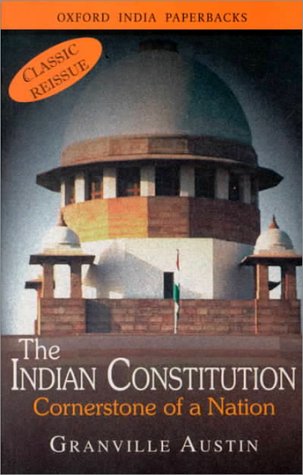 2 Reddit comments about The Indian Constitution: Cornerstone of a Nation:

I have been meaning to read these 2 books on Indian constitution by Austin Granville, based on a recommendation from someone whom I immensely respect. Just putting it out here, if anyone is interested.

More information about the author of these books, https://soundcloud.com/vclp/150722-003mp3

I never intended to say that people shouldnt learn any other language than their mother tongue. Studying other cultures is necessary these days. But refusing to learn the local language and demanding that everybody else should accomodate them, is a colonial attitude and not an Indian one. As such, it is very ugly to see Hindi speakers display such attitudes when they go into a non-Hindi speaking region.

One should also realise that throughout history, no two languages have coexisted peacefully without one trying to dominate the other. In such a scenario, the language which has official sanction tends to wipe out the local one, as is the case of Britain and France which transitioned from multicultural to monocultural nations over the past 200 yrs. They werent born monocultural but became one, after the govt. decided that one language (the language of the majority) will be spoken by all. I do not want India to become like these countries. Also, as the example of Pakistan and Soviet Union have shown, getting everybody to speak a language for the benefit of the politically powerful, doesnt unify them in anyway but breaks up the country.

I never read the source for that wikipedia quote, so I dont know if the source actually says so, but this is my source.

The Indian Constitution: Cornerstone of A Nation

The author Granville Austin, was physically present during the Constitutional debates and was awarded a Padma Sri for his two books on the Indian Constitution. His work has also been quoted in Supreme Court judgements on Constitutional matters, in determination of our Founders intent.

The language question generated the longest debate and is the largest chapter in his book.

&gt;The Hindi-wallahs were ready to risk splitting the Assembly and the country in their unreasoning pursuit of uniformity. They thus denied the Assembly's belief in the concept of accommodation and in decision-making by consensus. The Assembly members preferred to take decision by consensus or by as near to unanimity as possible. Not only was this method deeply embedded in the Indian tradition, it was manifestly the most practical way to frame the Constitution. A system of governance would not work effectively, Assembly members knew, if large segments of the population were opposed to it. Every attempt had to be made, therefore, to achieve the broadest possible agreement. The Hindi-wallahs, however, announced that they would impose Hindi on the country if they had a one-vote majority. To prevent this, the moderates went to great lengths to find a compromise. They ultimately acquiesced in the language provisions, although they were not happy with them, in the hope that they would provide a framework within which an amicable settlement would be reached. The moderates' fears that the extremists had not accepted the provisions in the spirit of consensus have, unfortunately, been borne out. Since 1950 the extremists have continued to scorn the spirit and have pursued their original aims on the basis of the letter of the Constitution, ignoring the intention of the compromise, which was to resolve the language issue without unduly harming the interests of any linguistic group.

Hindi speakers didnt give two hoots abt Indian unity and merely wanted to create their own "linguistic Rashtra", unlike every other cultural group who wanted a multicultural India where all languages are treated equally, without preference being shown to any language. But to keep the Hindi heartland within India, a compromise was made (as noted in your source) and Hindi was given official language status as a sop, alongside English.