Reddit reviews The Innovator's Dilemma: The Revolutionary Book that Will Change the Way You Do Business (Collins Business Essentials)

We found 9 Reddit comments about The Innovator's Dilemma: The Revolutionary Book that Will Change the Way You Do Business (Collins Business Essentials). Here are the top ones, ranked by their Reddit score. 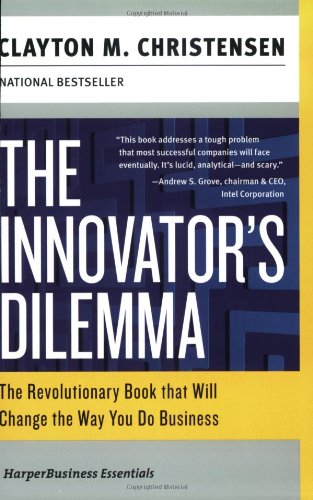 9 Reddit comments about The Innovator's Dilemma: The Revolutionary Book that Will Change the Way You Do Business (Collins Business Essentials):

this is up for debate. there's a theory/business thinking called "disruptive business/disruptive technology," and one of its main tenets is that a company should go the lengths to "ignore" what its customer base is saying... but the tenet is followed up with a statement that says that a company should do all in its power to seek out new innovations the customer is not expecting or doesn't know of.

customers don't know everything, and sometimes it's not a bad idea to ignore them while you cook up some fancy new features (iPhone's visual voicemail for example).

what RIM did was the opposite of this. It's apparent that while they were caught up in their own success, their hubris led to them thinking they did not have to worry about the iPhone and its encroachment of the business sector.

you can read more about this stuff in this book, it's pretty good stuff:

Strictly speaking I'm not surprised. Not because I'm an Apple Fanboy (I am - but for "right" reasons ;-) ).

But really just because if you look at the financials of each company over the last 10 years and look at how the product lines and marketing are handled, it's pretty obvious (since ~2000 to me anyway) Microsoft was going to and probably has now, hit a brick wall on revenue growth and innovation to drive more.

Where was Microsoft going to grow when Windows adoption has been stagnant and the compounding rate of adoption drying up compared to 1990s norms. Think about all those corporate users still using Win2K and WinXP; this is a very, very bad juju because corporate IT are one of the big 3 customer bases for Microsoft. And then there's Office. Between these two, there really are no other reliable cash cows in their stable of products. None.

XBox is a promising product line expansion but is it big enough to float Microsoft? I don't think so. Maybe highly profitable as an independent spin-out but where does that leave Microsoft itself? And the market size for games vs. the market size for tablets. Things that make you say "hmmm".

The laughable (when idiots spout it) and simple fact is that high market share doesn't assure revenue growth - in fact above, say 60-80% share, it seriously works against you if your products are in late adoption.

The classic Wintel PC is in late adoption as is the broader class of "computing devices" which includes all computers and tablets. Windows and Office are in late adoption as software products. And these are cash cows? What's really going to replace them? And they will have to be replaced. More Windows? More Office? LOL ROFL! Just like more Burroughs mainframes? That's all that's needed!

Tablets themselves are early adoption as a subclass. The point is, that you don't want high market share in late adoption in a rapidly changing technology. The Innovator's Dilemma describes why this is bad - it create inertia against innovation and it limits your revenue growth opportunities. It's the "why" of where Burroughs or Connor are today. Microsoft has all the classic symptoms.

Thus Microsoft's problem is akin to how Apple doesn't have the same problem now even though both companies are about the same age (give or take a year). Although you can think of this as karma for being assholes during the 1990s - it's really just that there's a real physical organization/economic mechanism behind it. Or... karma is real and physical!

Corporate IT is one of Microsoft's three major customers. Another is ISVs (most of whom were the VB6 weenies alienated in ~2000). Sure many people adopted .NET/VB7/C# etc. but Microsoft also lost a large and enthusiastic (blindly so in most cases) part of their mojo. Kind like Apple kicking out the trendy hipsters and expecting all to go well.

The third leg are Wintel HW vendors who have their own disconnects with the end-user markets. All insist on keeping customers at "arm's length".

And, no, end users are not in the top-three of Microsoft's customer base. Microsoft will say otherwise but it's BS lies or self-delusional lies they tell themselves: the supply chains tell the real story. And that is and always has been a serious problem for them despite their successes.

Further the market architecture of the Wintel system is fatally flawed for late adoption innovation - Microsoft's primary customers are 1-2 supply chain links up from actual end-users of their products.

Similarly Intel itself and most of the Wintel HW vendors are 2-3 supply chain links up from the actual end-users as well. This disconnect is part of why the A4 and A5 exist!

Then compare this with Apple which has 0 supply chain links from the customer, end users, for both HW and SW and it's pretty damn obvious who is going to "own late adoption" for computing appliances.

Late adoption requires "appliance-ification" of your product which can not be done at a distance like these supply chain gaps create. No, it's not a matter of "good top-down management" - it's that "bottom-up emergent activity" can't survive or thrive with supply chain gaps. Not when you have to design things by committee across corporate legal entity barriers.

This is why you need to do both HW and SW together - a goodly part of why Apple has its success. And this is why it's a fatal market flaw for Wintel. Which Android has chosen to replicate also. Brilliant! Duh!

As an entrepreneur I've always seen this kind of "it's not my job; I do SW (HW) not HW (SW)" behavior as a wonderful, heaven-sent opportunity to skewer larger competitors. It's an Aikido thing: use their weaknesses as your strengths so they their attempt to muscle you ends up damaging themselves more. It works surprisingly well. It seems to be working for Apple too.

The funny/sad part is all the Geeks who try to defend Wintel/Linux or Android who manage to irrelevantly talk right pass the iPad-buying public with specs and tech-weenie justification that mean absolutely nothing most paying customers. It's like trying to impress the prom queen with your slide rule skillz. It doesn't even register as rational or relevant. Nobody who matters (has money and want to spend it) cares.

You see a lot of these Geeks never lived through the actual leading edge period of PCs nor have most seen an entire technology cycle to even know what early or late adoption look like or how they are different in terms of selling or buying processes. In an early adoption environment, geeks have some power to (de)leverage sales.

I think that's what most of these folks are trying to tap into with spec-talk and nerd-talk about the L33t Pwr2 of Android or OSS or Wintel. The problem is the higher order technology adoption of computer devices is not in early adoption - only the subtechnology of tablets is so in terms of majority buyers, it's a late adoption buying process, not early adoption.

In that world, geeks are nearly powerless to influence most buying decisions because you are so tiny in number and the buyer market made up of non-Geeks so enormous in number. It's a Bayesian statistic prior population thing.

It's the early adoption phase when Geek outnumber or have parity with early adopter buyer markets that Geeks can play the role of "diffusion process gatekeeper". Not in late adoption though. It's a different game at that point. And Apple knows that game far better than all of the Wintel, OSS and Android crowd combined. Funny-Sad.

Your comments on the insiders not wanting to cut an existing source of revenue is the entire subject of a book by Clayton Christensen called the Innovator's Dilemma. Christensen chronicles the hard drive industry and shows how firms continuously refined their products in incremental ways and did everything right according to management and shareholders, only to be crushed by new disruptive technologies.

That's one item that I got from my worthless (50k) MBA.

I'm reading a book called the Innovator's Dilemma that explains how a company (and Sears is a perfect example) can do all the right things, and still lose its position as the dominant player in the market.

It's a very insightful read -- I recommend it. Very interesting if you're ever thinking of starting your own business.

&gt; don't have the financial need to innovate

The Innovator's Dilemma book covered this. They do need to innovate and they know that. The problem is that any innovation will look like a rounding error compared to current financials and so on those terms it is hard to make any progress.

That is the goal of pretty much all business startups. See The Innovator's Dilemma.

Correct for some companies. Especially, now that the internet has really helped us define affinity groups or tribes. Check out Seth Godin if you like discussing that.

The economy has scared a lot of companies into consolidating their products to target the acceptance of the mass bell-curve. This is the safe route; they don't want to wait for the adoption curve to pick up.

Here's the other kick: Some companies are too big to take small wins. A company has to show good returns on their stock every quarter. A small company can turn a profit from niche; however, a larger company has too much infrastructure to support for anything other than large wins and huge margins (to turn the same percent growth).

Suggest reading the Innovator's Dilemma if this is interesting to you.