Reddit reviews The King Of California: J.G. Boswell and the Making of A Secret American Empire

We found 4 Reddit comments about The King Of California: J.G. Boswell and the Making of A Secret American Empire. Here are the top ones, ranked by their Reddit score. 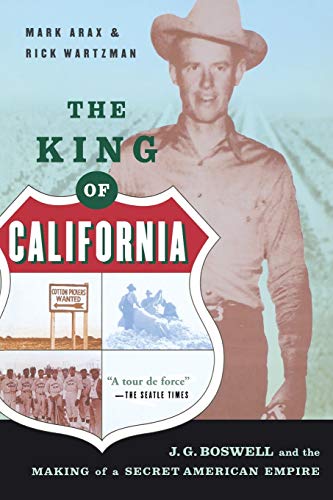 Much more than a business story, this is a sweeping social history that details the saga of cotton growers who were chased from the South by the boll weevil and brought their black farmhands to California.
Check price on Amazon

4 Reddit comments about The King Of California: J.G. Boswell and the Making of A Secret American Empire:

A hundred years ago, two or three so-called "water barons" systematically bought up most of the state's water rights from the small private farmers and ranchers who owned the watershed. (See: "Chinatown," "Cadillac Desert," "The King of California,") and ran their extensive agricultural domains as fiefdoms. Those landowners who hesitated, were "convinced" by tactics legal and (often) otherwise.

In order for the state to grow (and food to grow, for that matter) huge political concessions, purchased legislators, and much smarmy backroom dealing ensued, as the state's water sources and aquifers were divvied up into water "districts" owned, leased, traded, and sold by private entities and their heirs. (Obviously, where there is no water, there can be no industry or housing.)

From them today, the counties, municipalities and private developers purchase water (a public resource,) all of which-- including the infrastructure to deliver it-- is paid for by public taxes and levies. The problem now arises because of poor management, over-allotment, and rampant cronyism in both D.C. and Sacramento.

The rice farmers (who are not farmers at all but huge multinational holding companies owned by one of the families,) cut a deal with the state back in 1974(?) to get first dibs (at ridiculously low rates-- like zero--) to water (from San Francisco!) the rest of the district pays through the nose for, all delivered by publicly-financed and maintained levee system and aqueduct. Perhaps not so eqregious a use of a public resource in time of plentiful rains, but extortionate during drought such as this.

The California water wars were and are a fascinating tale of greed, monopoly and corruption. If you'd like to delve further, I highly recommend this excellent account of its modern origins.

King of California. Covers the history of the JG Boswell Company and the draining of the Tulare Lake here in the South Valley.

Here's a good book on the subject.

I have to admit, it gets a little dry sometimes (ugh, no pun intended) but even if you skip around, or just read the more historical sections, it's worth it.