Reddit reviews The Last Dive: A Father and Son's Fatal Descent into the Ocean's Depths

We found 5 Reddit comments about The Last Dive: A Father and Son's Fatal Descent into the Ocean's Depths. Here are the top ones, ranked by their Reddit score. 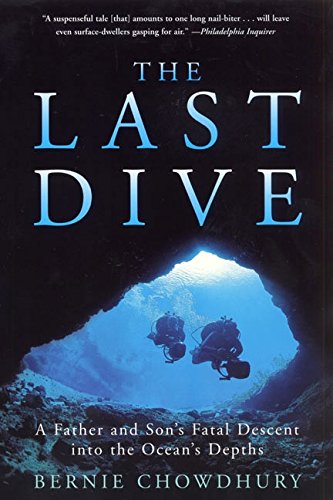 5 Reddit comments about The Last Dive: A Father and Son's Fatal Descent into the Ocean's Depths:

Try Krakauer's other well known book Into Thin Air, and because there's some controversy regarding his version of events, also The Climb by Anatoli Boukreev who was a major player that day.

Krakauer's other book Under the Banner of Heaven is a good "true crime" style story about some Morman murders, but may not be enough like Into the Wild to appeal to you.

Over the Edge of the World is more of a history, covering Magellan's circumnavigation of the earth. It was facinating and definately had intrigue, machinations, and survival elements.

Another book on exploration and survival, Endurance: Shakleton's Incredible Voyage

And another one, Fatal Journey: The Final Expedition of Henry Hudson. I think this is the one I read, but I can't be certain. It doesn't seem to be as well regarded, but i thought it was still interesting.

A book on diving and survival: The Last Dive, Chowdhury

The Hot Zone could be thought of as science survival. Anyway, you'll probably love the opening bits in Africa, although it does slow way down after that.

Far away from survival, but still about travel are the wonderful Bill Bryson's travelogues. Witty and informative. In a Sunburned Country and A Walk in the Woods are particularly recommended.

Edit- Filling in more of the details:

Dives with Bernie were all done in the northeast. Bernie is awesome but has a very very busy schedule so scheduling with him can be a pain.

Dives with Jill were done in High Springs Florida (Ginnie Springs, etc.). Jill could not have been nicer or more accommodating- I had a short window in which I could do my full cave course and Jill made time for me and found another student for the course.

Dives with John were done in Florida. John is an awesome guy with great stories and a wealth of knowledge. He can be a little hard to schedule- but absolutely worth it.

It's up there on worst ways to go. If you like these kind of things, I strongly suggest:

About ten years ago or so I stocked up on books because the army sent me to Afghanistan and I needed non electronic stuff to pass time on missions.

I picked up books about real life people who dived. The one that I remember loving the most was about guys who dived the wrecks off of NC. The book was incredible but I can't remember the title. If I can find it I'll edit and post here.

These diving books really helped me pass the time in the turret when were stopped at some place with nothing to do.

Edit: I found the books:

The Last Dive is about a Father and Son diving team. This one actually focuses on the German U Boat off of the NYC coast but I think they talk about NC wrecks too. This one is my favorite.

Fatal Depth is the other book I really enjoyed and taught me about the world of deep wreck diving. It blows my mind at everything a diver must train and know about. I'll never forget lessons that can even be applied to non diving things in your life. This book I think focuses on a wreck off of Nantucket called Andrea Doria. But I think both of these books talk about diving off of NC because of all the awesome wrecks down there.