Reddit reviews The Map That Changed the World: William Smith and the Birth of Modern Geology

We found 8 Reddit comments about The Map That Changed the World: William Smith and the Birth of Modern Geology. Here are the top ones, ranked by their Reddit score. 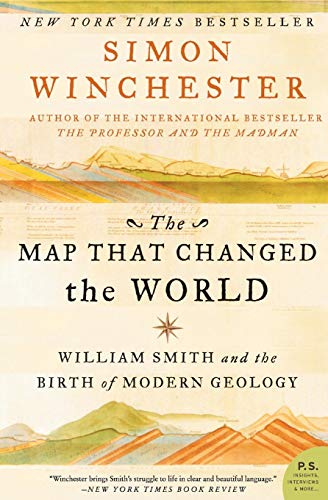 8 Reddit comments about The Map That Changed the World: William Smith and the Birth of Modern Geology:

The two books every geology student should read are The Man Who Found Time and The Map That Changed The World. The first one is about James Hutton, considered the father of modern geology.

Simon Winchester, The Map that Changed The World

The map that changed the world

The Hunt for Planet X: New Worlds and the Fate of Pluto

The Wealth and Poverty of Nations is a very good look at macro-economics. At least, as a non-economist, I thought so.

As already mentioned, The Map that Change the World is an excellent introduction to the early stages of geological science. Simon Winchester is a very successful and well regarded popular historian.

"The science of rocks and minerals" is an incredibly broad topic. To be specific, if you do a degree in geology, you will do a minimum of 1 course just on understanding minerals, and 2-3 courses on rocks (plus another on fossils).

As for essential reading, there is not exactly a generic geology "bible," but often subdisciplines have such books. There are a lot of good books out there -- "The map that changed the world," "Why geology matters,", "Walks and talks in the geological field" (a classical and somewhat outdated text, but still a great read that covers basic observations quite well), or any number of other books. Most physical geology textbooks cover the same material in slightly different orders, so any of them are good. Historical geology is interesting to me, and again, any textbook will do just fine.

terrific book, by the way

Map That Changed The World!

There were some in the Classical world who had a very loose idea that fossils represented past ages, a time when the world was very different from today. A little background on that topic

Unfortunately, the mystical elements of their society became dominant before they got very far with that concept, followed by the so called Dark Ages [perhaps Middle Ages is more accurate]. This period is roughly 450 AD to about 900 AD or so. While there were certainly happy times during this period, knowledge for its own sake was limited and discouraged. There is some thought that myths of Dragons and the like arose in part from the occasional fossil find by those both ignorant of fossils and lacking the resources to learn about them [ie no good books or universities, etc that might have the info]. While I refer specifically to western cultures here, it is all but certain that dragons and other great beasts of myth in all cultures grew in part from fossil finds.

It is hard to draw a strict line between the Dark Ages [Middle Ages], early Medieval, and late Medieval and Renaissance periods, but certainly by the the 1400s we had people considering the question of fossils from positions other than superstition and devil works. Da Vinci made some inroads into the question, though as far as we can tell he posed no serious theory so much as he just recorded his questions and observations. Some background there

In what we might call modern times, it was the Industrial Revolution that sparked the discovery of fossils en masse and pushed people to develop theories to explain them. This arguably started about the time the European powers were doing their serious colony building, roughly 1600 and forward. The digging of canals and coal mines put people in contact with geology and fossils in a very real way. And, of course, you had intellectual curiosity going hand in hand with the industrial revolution--to anyone living in the Enlightenment science was the only good way to advance industry, business, and society. The first attempted theories were clever, but usually very wrong. As more finds and more discussion happened, ideas were refined.

By the late 1700s ideas were starting to emerge that we would recognize as plausible even by today's standards if they were presented by someone not familiar with science, but who did have access to finds. For example: the ideas then put forward were similar to what a grade schooler might propose after visiting a museum or seeing a magazine spread. They were off in detail, but the big picture was more or less accurate.

By the time Darwin set off on his famous journey in 1831 scientists were fully confident that epochs had occurred on Earth that were very different from today; and several hypotheses had been presented to explain them, both geologically and biologically. These were posed precisely because fossils and geology demanded explanations that included very different scenes from the present day [this is putting aside the Noah's ark flood question, religious views aside, you still had to explain dinosaurs somehow]. These theories and hypotheticals followed the fossil question, they did not lead to the fossil question.

Perhaps the most practical biography to look at would be William Smith: https://en.wikipedia.org/wiki/William_Smith_(geologist), a guy who did survey work for canal and mining companies in the 1700 and 1800s, and who made the first good compilation of fossils and the strata they were found in. He was the guy who demonstrated that fossils could be tied to specific strata, and that various types of fossils would occur with/near coal or other useful mineable items, soil types, etc. A reader-friendly biography in book form was written a few years ago, The Map that Changed the World

Edit: I can't believe I left out dinosaurs. Dinos and other ancient animal groups were organized into named groups by a contemporary of Darwin, a guy named Richard Owen. A bio can be found here: https://en.wikipedia.org/wiki/Richard_Owen