We found 7 Reddit comments about The Motorcycle Safety Foundation's Guide to Motorcycling Excellence: Skills, Knowledge, and Strategies for Riding Right (2nd Edition). Here are the top ones, ranked by their Reddit score. 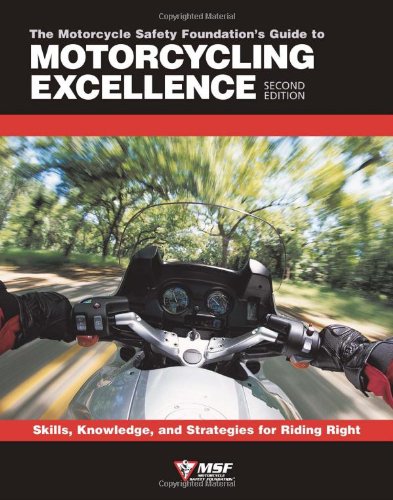 I'm in a similar boat, so here's what I've found in my internet perusing.
Being able to already ride a bicycle is usually important/a signal of likely passing, some understanding of road laws is usually expected, but I hear if you let them know you should be fine.
Webbike world has a pretty good overview of the course,

http://www.webbikeworld.com/motorcycle-training/msf/basic-rider-course/
and covers a bit of gear to bring.

The Ninja250 forum faq also has some pretty handy MSF as well as some general riding stuff.
http://faq.ninja250.org/wiki/Should_I_take_an_MSF_course%3F

There are also tons of books on how to ride, such as the MSF book

Though that might be overkill considering the class should cover you pretty completely.

This one is pretty thorough and goes into some detail about a lot of scenarios you may otherwise panic in as a beginner. Things like skidding, adverse weather and floods, sudden mechanical failure, debris in the road, cornering on cambers, loads.

Be warned it starts basic as hell, but it builds into some quite important stuff.

I too am going to be taking my safety course, next month. I got this book to help me before I take the course. They'll go over all of this stuff in the class, but I figured it can't hurt to study before! I've only read about half of the book, but I've already learned a ton. Definitely recommend you read it if you get the chance.

The only things I'm going to say to add to this in depth post is that not all states require a permit before your MSF class. I didn't need one in Washington State. So look up your state's laws and see what you need to do. Also, my class was $125, I think.

You'll need boots that go above the ankle and gloves and long sleeves before you take the class. If you know you're going to be riding for sure, you can go and get good gear beforehand, but even someone as ATGATT as myself was fine with jeans and my regular jacket rather than full gear. The fastest I went was maybe 25 in a smooth parking lot without anything more dangerous than a cone to hit. Yes, there's the risk of injury, but my four layers (it was cold) would have protected me enough for that, I think. There was zero risk of hitting another car, and a small chance of hitting another bike (in most classes, mine had three people, one failed, and so it was two of us).

I agree with a 250 bike of some sort. I started on a Rebel 250 and loved it, but I'm 5'1" and a size four (I'm female) so it was fine for me. Anybody over about 5'5" would be too tall for the Rebel. But find what kind of bike you want -- sports bike, cruiser, standard, etc. -- and get one with a low curb weight and smaller engine. Just for now. I've actually never completely dropped a bike, but twice I've tipped bikes over. The Rebel was in my MSF class and I got it upright on my own. The second was my brand new Harley, riding it back from the dealership, and I couldn't get the bike up on my own, my husband had to help. Tipping the Rebel, and knowing how to get it upright on my own meant that when I tipped the Harley I didn't panic and I could hold it until my husband got over to me (he had followed me home, so I knew he was there and he could help). Had he not been there I would have figured it out, I'm sure, but knowing I could do it for a smaller bike at least caused me not to panic and not to let go.

Also, get this book. http://www.amazon.com/Motorcycle-Safety-Foundations-Motorcycling-Excellence/dp/1884313477/ref=sr_1_1?s=books&amp;amp;ie=UTF8&amp;amp;qid=1332116572&amp;amp;sr=1-1 The "textbook" I got during my MSF class was a light version of this. But I read this before my class, showed up an hour late accidentally (which is normally an immediate dismissal), and breezed through the classroom stuff because I'd read the book. That was the only reason I was allowed to stay. The other book was a joke compared to the amount of information in this one. I read it over the course of two weeks before my class. It was because of this book I knew how to stand the bike up after having tipped it, even on my own (my instructor came over, but didn't touch it). I was seriously the Hermione of the class having read this book beforehand.

Otherwise, I completely agree with the others. Take the class, start on a small bike, don't forget to buy gear enough to keep you as alive as possible, look up the laws of your state, and enjoy it!

Capt. Crash Idaho has some good tips and techniques with his free videos.

Here are some basic parking lot exercises. A tip for laying out parking lot cones--get a bunch of bright yellow tennis balls and cut them in half. You'll get two "cones" for the price of one tennis ball.

There's a lot of good articles on Bike Safer.

There are some good books and DVDs if he's willing to spend a few bucks, get the Total Control or Ride Like a Pro DVDs. RLAP is mostly focused on slow-speed tight turning techniques (like the police bike "rodeos" do). More Proficient Motorcycling book is great for street survival tips. If he's willing and able to spend more money, then he could take a course, such as Total Control, MSF Experienced Rider course, etc. Speaking of MSF, you can get their book here.

When I took the MSF Beginning Rider Course, several of the other students already had experience riding and owned their own bikes. They, like me, were there to refresh the basic skills and maybe learn something new because we were all self-taught. BRC isn't cheap, but I think it's worthwhile, and being on a bike in a structured environment like that might be just the confidence-builder that he needs.

Edit: I found a link to PDF files from the MSF, including their textbook for the BRC.